Lack of testing for COVID-19 in Arizona, here's what we know 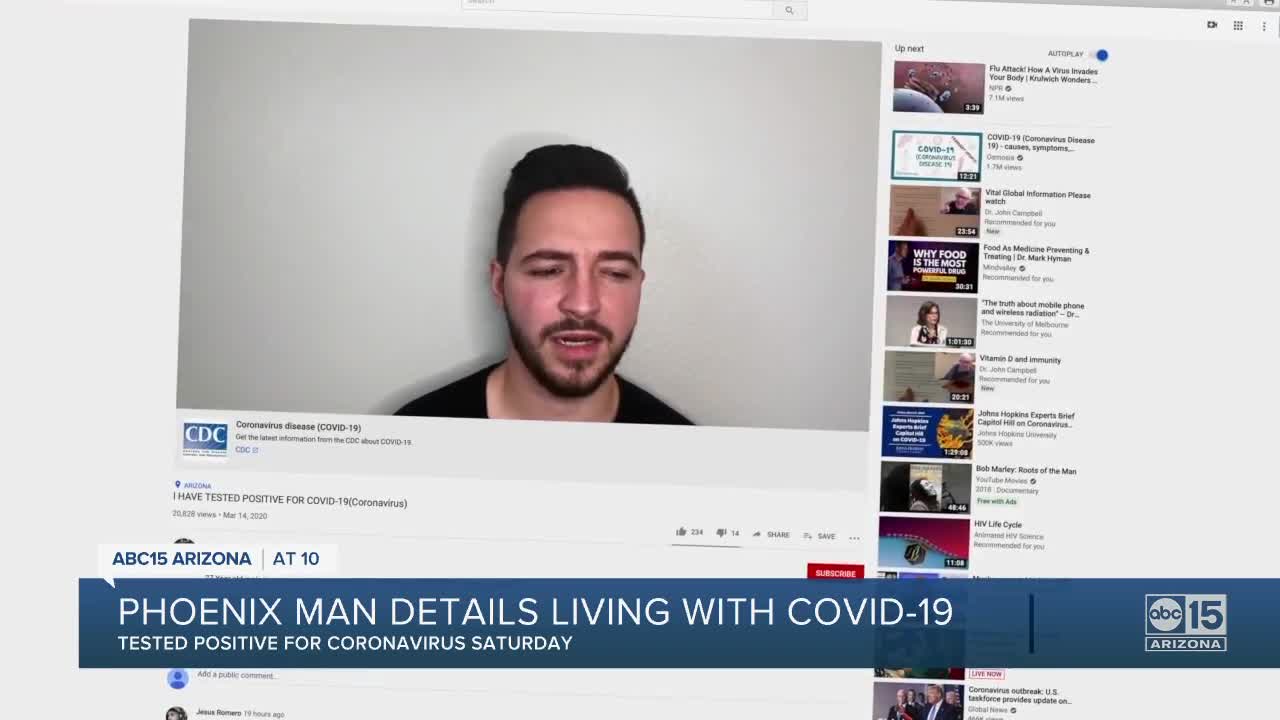 An Arizona man who says he tested positive for COVID-19 is sharing his experience about how the virus has affected his body, as well as his relationships with family and medical professionals.

PHOENIX — The director of the Arizona Department of Health Services has said the state has the ability to test up to 450 people at the state's lab. However, currently, the state is testing no where near its capacity.

ABC15 has learned that despite the capacity, the state lab must follow certain criteria in order to test a person for coronavirus, also known as COVID-19. That includes whether or not that person has traveled out of the country or someone who has has direct contact with someone who tested positive for COVID-19.

Patients should only be tested if their healthcare provider believes they have #COVID19 symptoms. The AZ State Lab & our diagnostic lab partners have the capacity to process tests. We are working closely with healthcare providers to test those who need it. https://t.co/SWKDSq34BT

The low test numbers in Arizona are far below other states in the country, who are testing on average 55 people each day.

Here is a look at the number of tests the state has done over the last few days:

As of Sunday morning, Arizona's state lab had performed 183 tests, the same number from 24 hours earlier.

In an interview with ABC15, Dr. Cara Christ, the director of Arizona Department of Health Services, told ABC15 that the low test numbers will change because commercial labs have begun testing for COVID-19.

According to health officials, as of Friday, the state has two days worth of test kits, if they reach capacity.

A spokesperson for AZDHS said the state lab has 800 tests available to conduct tests for COVID-19. The office has the ability to test up to 450 samples a day.

Arizona can ask for more test kits if, and when, the state lab reaches its testing capacity.

On Saturday, one of those commercial labs reported its first positive test.

Despite low test numbers reported at the state lab, Dr. Christ said commercial labs have tested hundreds of people. However, those numbers are not being reported on the state's website.

When it comes to testing in Arizona, Dr. Christ said she is hearing two concerns: providers are not testing because they either cannot get a test kit or do not have the proper protective equipment to conduct the tests.

BEING TURNED AWAY FOR TESTING

One person, a Valley resident in their 40s, told ABC15 that he or she has been fighting for dates to be tested...by anyone.

The resident, whose identity we're protecting, was turned away from their primary physician.

Their symptoms began on Monday. "I was told one week with fever will require medical attention," this person said.

Two days later, they were told to not come to the doctor's office because they did not have any test kits.

The resident told ABC15 a call into the Pinal County Health Department indicated that they do not qualify under the current testing guidelines.

"The health department had four people that were making calls back to people for additional triage and I was on the list," they said. "No call back that Wednesday."

The following day, the patient's primary care physician spent three hours trying to get the health department to call them back.

On Friday, the Valley resident spoke with the health department one last time. "They told me I qualify overall to be tested but will not test me without first having a flu test to rule that out," they told ABC15.

However, the patient was told by their primary care physician to not come in with symptoms. Eventually, this person went to the emergency room. "They came out with a mask for me to wear and brought me into a room for triage," they said.

The test for influenza was negative. So were the other tests. Three hours later, doctors finally tested for COVID-19.

"The roadblocks presented by the health care system ranged from changing federal guidelines, lack of test kits, fear of spread, and lack of equipment," they said.

The Pinal County resident was told to self quarantine for three days until test results come back.

Their spouse now feels ill, too.

"I worry about the vulnerable and citizens that are not strong enough to advocate for themselves in this time of crisis," they said.

Could mobile locations be set up for testing be the next step in Arizona?

Dr. Christ said there is not just one reason on why there is a lack of testing, "one of the things we’re hearing is medical providers may not have the testing kits or the appropriate PPE, so that's what we’re working on today is, can we set up some type of testing center, can we work with the labs?"

As of Saturday, a spokesperson for the department said mobile testing locations have not been established yet.

Arizona's state lab no longer has to send a positive test to the CDC for confirmation.

Over the weekend, ABC15 confirmed that a positive test at the state lab no longer has to be considered 'presumptive positive.'

Before, the state lab would have to send any test that is positive to the CDC in Atlanta for confirmation.

WHAT TO DO IF YOU HAVE COVID-19

The Arizona Poison and Drug Information Center is now available to take COVID-19 calls from Arizona providers and the general public: 1-844-542-8201

The Arizona Department of Health Services has a website dedicated to what you should do if you believe you have symptoms.

If you traveled to China or other areas currently affected by COVID-19 and feel sick with fever, cough, or difficulty breathing, you should:

ABC15 has reached out to AZDHS about zero tests in 24 hours, but have not heard back.