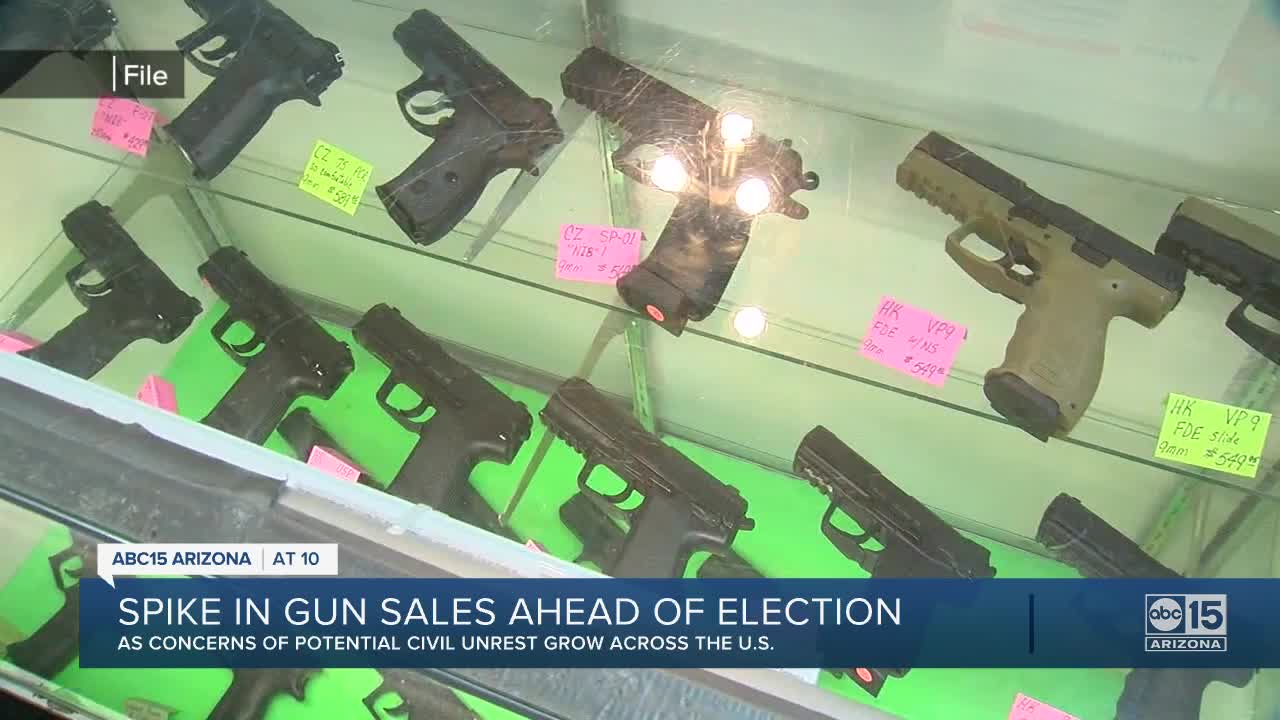 The coronavirus pandemic, racial tension and rioting, and now a contentious election -- all of it driving an unprecedented rise in gun sales.

It has been a year of turmoil and stress for many Americans.

The coronavirus pandemic, racial tension and rioting, and now a contentious election -- all of it driving an unprecedented rise in gun sales.

Walmart announced Thursday it has removed ammunition and firearms from displays at U.S. stores, citing "civil unrest" in some areas.

Other gun stores though, say customers have been the ones removed all the guns and ammo from the shelves.

One man, named Matt, drove from Lake Havasu with a friend just to buy some rounds. He said he visited more than ten stores and spent all day searching.

"This is literally the only spot we found it would let us buy more than a box of ammo at a time," he said.

"We have a hard time getting inventory," said Juan Rosas, a manager with ROE armory.

There are multiple factors in the firearm frenzy.

"Well, it started with COVID. There was a lot of demand and then the riots really turned it up another notch," said Jeff Serdy, owner of AJI Sporting Goods and mayor of Apache Junction.

Now, demand is being driven by the divisive election and uncertainty following the results.

"If Trump wins the election, and the other side riots [you'll have] civil unrest," said Glaser. "If Biden wins, it’s going to be an Obama scare all over again. People will be buying guns and ammo."

The prospect of unrest is a real fear for many.

"Whatever way it goes, Trump or Biden, it’s going to be chaos," said Bob Stroup, a Trump supporter from New River.

"I think there will be turmoil either way," said Serdy.

"I’m worried," said Rosas. "Whichever side wins, the other side might have a problem with it."

"This country is, unfortunately, in some sort of turmoil right now. And people are afraid," said Glaser.

That fear driving people to buy a weapon, many for the first time.

"More women, more liberals," said Glaser. "We have a whole new clientele of shooters. It’s people who never owned a gun. First time gun-buying us up to an unbelievable level."

According to FBI statistics, which began in 1998, eight of the ten highest weeks for background checks in the US have come since March of 2020.

Arizona alone has had more than 50,000 background checks every month since March.

"Does it worry you?" asked ABC15's Zach Crenshaw.

"Honestly, yeah," said Matt. "Now everyone’s going to be equipped with a gun that wasn’t before. You know, tempers flare in things happen. I don’t know what it’s going to be like"

No one can predict what will happen on - or after - November 3. Gun store owners though, are confident they are "not slowing down anytime soon."