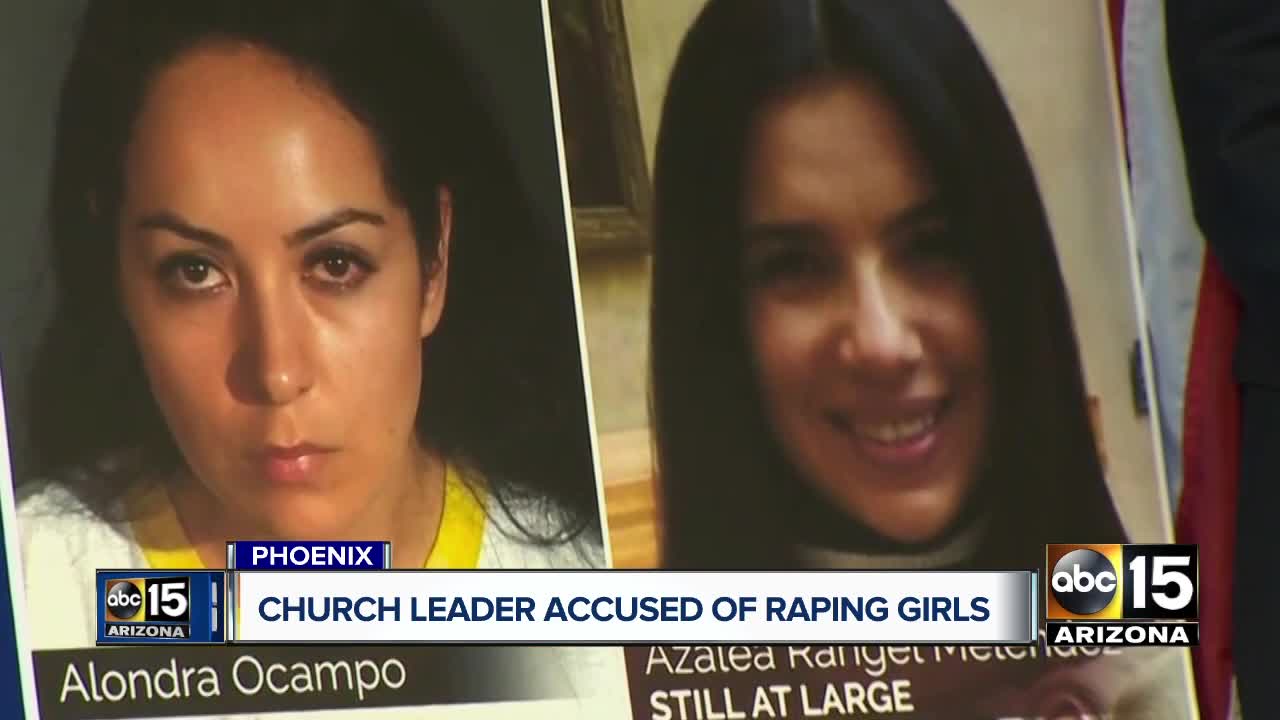 The Mexico-based La Luz del Mundo church said Wednesday that its leader and "apostle" Naason Joaquin Garcia, who was arrested in California on charges of human trafficking and child rape, remains the spiritual leader of the group, which claims 5 million followers in 58 countries. 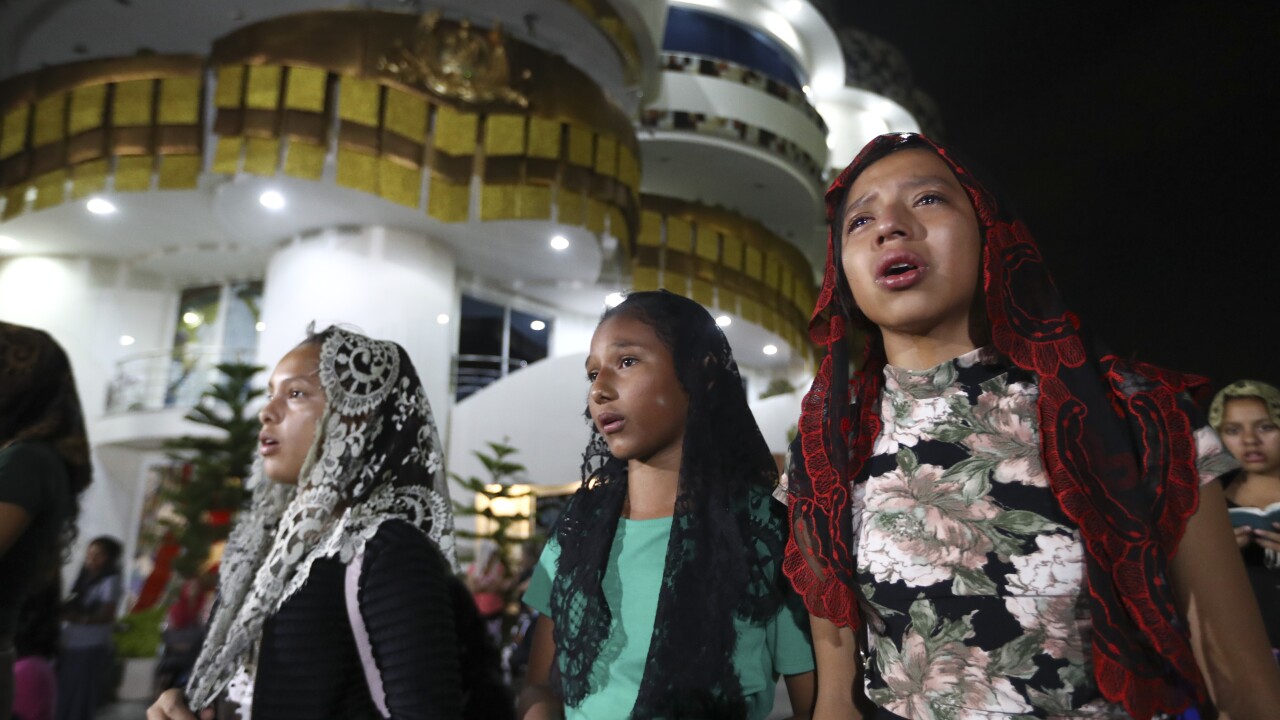 The Mexico-based La Luz del Mundo church said Wednesday that its leader and "apostle" Naason Joaquin Garcia, who was arrested in California on charges of human trafficking and child rape, remains the spiritual leader of the group, which claims 5 million followers in 58 countries. It also strongly denied the charges.

"We believe these accusations are defamation and slander of our international director, the apostle of Jesus Christ," said church spokesman Silem Garcia, who is not related to Joaquin Garcia. "His position as apostle of Jesus Christ was given to him by God, and for life, and he continues to lead the church."

Joaquin Garcia, 50, and a follower of the church, Susana Medina Oaxaca, 24, were arrested Monday after their chartered flight from Mexico landed at Los Angeles International Airport.

The Phoenix location of La Luz del Mundo (The Light of the World) church says they will not be affected by Garcia's arrest. Their service schedule will remain normal, with about three services a day. Garcia was a pastor in the Valley 25 years ago.

“ I think the news was very alarming, and my first reaction was where is this coming from?” questioned volunteer Abdei Lopez. “Nobody is guilty until proven guilty, right? We are all just until proven otherwise.”

Garcia was last in the Valley last summer, where he received a certificate of appreciation from Phoenix leaders.

“Wherever it is that he is, he still our leader, he still an apostle of Jesus Christ. We continue our daily prayers, we are continuing our normal lives and that’s the unity that I think distinguishes us from other communities, as we are a united community,” Lopez said.

A third defendant, Alondra Ocampo, 36, was arrested in Los Angeles County and a fourth, Azalea Rangel Melendez, remains at large.

The group faces a 26-count felony complaint with allegations that range from human trafficking and production of child pornography to rape of a minor. The charges detail allegations involving three girls and one woman between 2015 and 2018 in Los Angeles County.

The defendants' arraignment was extended to next Monday. They did not enter pleas at the hearing, where family members -- including Joaquin Garcia's wife and three children -- and more than a dozen congregants were in the audience.

Joaquin Garcia answered Judge Francis Bennett's questions through a Spanish interpreter while his co-defendants responded softly in English. His family waved as he walked out of the courtroom before a bailiff admonished them.

The fundamentalist Christian church, whose name translates to The Light of the World, was founded in 1926 by Joaquin Garcia's grandfather. His father also led the church and was the subject of child sex abuse allegations in 1997, but authorities in Mexico never filed criminal charges.

The accusations were particularly painful for a church that has tried to cultivate an image for its law-abiding, hard-working, conservatively-dressing people in Mexico -- a country where it claims about 1.8 million followers. Its male members favor suits and short hair, and female members wear veils that cover their hair and modest dresses. There are about 1 million U.S. members.

"We have always encouraged prayer, honesty," said Mexico City church member Ruben Barrera. "Look at the way we dress, it is very honest, the haircuts, the way the women dress. We practice what we preach."

Barrera said that based on his knowledge of Joaquin Garcia's life, he believes the accusations are "categorically" false.

The church has itself been the subject of discrimination in Mexico, in part because it has recruited significantly from Mexico's lower classes and because many in the predominantly Roman Catholic Country are suspicious of religious minorities.

But in the western city of Guadalajara where it is based, housewives seek out Luz del Mundo followers to work as maids, because of their reputation for honesty. When asked why the church has so many well-appointed temples in Mexico, Garcia, the spokesman said "that is because the faithful" -- many of whom are construction workers -- "are the ones who do the construction."

Around 1,000 worshippers gathered at the headquarters of La Luz del beginning in Guadalajara beginning Tuesday evening to pray for Joaquin Garcia as he was held in Los Angeles. Religious services were held hourly in its white, wedding cake-like cathedral.

Nicolas Menchaca, another spokesman, said the church trusts the justice system in California: "We believe they will do their job and that they will arrive at a favorable conclusion."

Joaquin Garcia is named in 14 counts and Ocampo in 21. Oaxaca and Melendez are each named in two counts.

Joaquin Garcia -- who was a minister in Los Angeles and other parts of Southern California before becoming the church's leader -- coerced the victims into performing sex acts by telling them that refusing would be going against God, authorities said.

He allegedly forced the victims, who were members of the church, to sexually touch themselves and each other. One of his co-defendants also allegedly took nude photographs of the victims and sent the pictures to Garcia, the criminal complaint said.

Joaquin Garcia told one of the victims and others in 2017, after they had completed a "flirty" dance wearing "as little clothing as possible," that kings can have mistresses and an apostle of God cannot be judged for his actions, the complaint stated.

"Crimes like those alleged in this complaint have no place in our society. Period," Becerra, the California attorney general, said in a statement. "We must not turn a blind eye to sexual violence and trafficking in our state."

The attorney general's investigation began in 2018, prompted in part by a tip to the California Department of Justice through an online clergy abuse complaint form.

The arrest is sure to prove an embarrassment for Mexico, in part because similar allegations have never resulted in charges there and in part because the church has long had political influence.

"It shows the enormous difference between the quality of law enforcement in Mexico and the United States," said sociologist Bernardo Barranco of the Center for the Study of Religions in Mexico. "In Mexico, unfortunately, there is an innate protection for clergy, not just for the Luz del Mundo."

In May, an opera concert at Palacio de Bellas Artes, the main cultural venue in Mexico, generated controversy because in some places it was presented as a tribute to Joaquin Garcia. Critics said a secular state such as Mexico should not use a public place for that purpose.

The work, "The Guardian of the Mirror," was broadcast on social networks and screened outside the Palace, with the church's followers in the audience.

La Luz del Mundo denied that it was an homage and said the opinions expressed in social networks were not promoted by the institution.

Mexico's former ruling Institutional Revolutionary Party, the PRI, long supported Luz del Mundo as a counterweight to the Roman Catholic Church, whose followers led an armed uprising against anti-clerical laws in the 1920s.

That relationship cooled after the PRI became friendlier with the Catholic church between 2012 and 2018, but new leftist President Andres Manuel Lopez Obrador has shown more openness to protestant and evangelical churches than his predecessors. He took office late last year.

Asked about the arrest on Wednesday, Lopez Obrador said "we didn't know, or at least authorities didn't have information, about what was made public yesterday," adding "my conscience is clear."