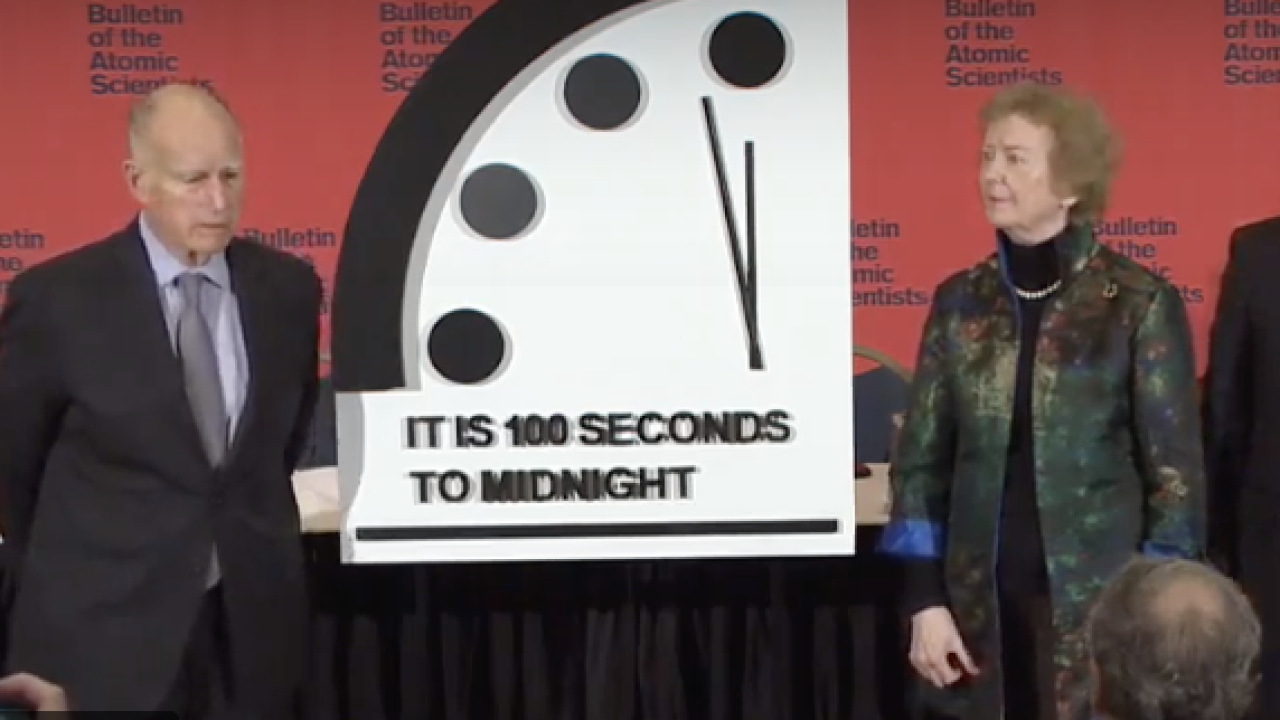 The 2020 Doomsday Clock is now 100 seconds to midnight, moving 20 seconds forward from 2019's setting at two minutes to midnight.

"The Doomsday Clock continues to click forward," Rachel Bronson, the President and CEO of the Bulletin of the Atomic Scientists, said at Thursday's 2020 Doomsday announcement.

The clock was initially set at an undisclosed time in November, but recent tensions between the United States and Iran caused the Bulletin of the Atomic Scientists to reconsider their decision and move the clock to 100 seconds to midnight.

The climate crisis was also cited as a reason for the Bulletin of the Atomic Scientists to move the hands of the Doomsday Clock forward.

Additionally, the members of the Bulletin of Atomic Scientists said the "continued use in 2019 of untruths, exaggerations, misrepresentations by world leaders in response to what they deem 'fake news' has made worse an already dangerous situation," Robert Latiff, a member of the Bulletin of the Atomic Scientists, said while discussing information warfare and other disruptive technoligies.

"We have a witches brew of ingredients for global conflict," Latiff said.

In a statement on TheBulletin.org, the Bulletin of Atomic Scientists noted, "This year, we move the Clock 20 seconds closer to midnight not just because trends in our major areas of concern—nuclear weapons and climate change—have failed to improve significantly over the last two years. We move the Clock toward midnight because the means by which political leaders had previously managed these potentially civilization-ending dangers are themselves being dismantled or undermined, without a realistic effort to replace them with new or better management regimes."

The Doomsday Clock was created in 1947 to warn the public about "how close we are to destroying our world with dangerous technologies of our own making," according to TheBulletin.org.

"It is a metaphor, a reminder of the perils we must address if we are to survive on the planet," the website continued.

In 2019, Bronson released the following letter explaining why the clock was set two minutes to midnight.

"As the Bulletin’s Science and Security Board prepared for its first set of Doomsday Clock discussions this fall, it began referring to the current world security situation as a 'new abnormal,'" Rachel Bronson wrote. "This new abnormal is a pernicious and dangerous departure from the time when the United States sought a leadership role in designing and supporting global agreements that advanced a safer and healthier planet."

"The new abnormal describes a moment in which fact is becoming indistinguishable from fiction, undermining our very abilities to develop and apply solutions to the big problems of our time. The new abnormal risks emboldening autocrats and lulling citizens around the world into a dangerous sense of anomie and political paralysis."

During the 2020 announcement, Bronson said “we feel no more optimistic.”