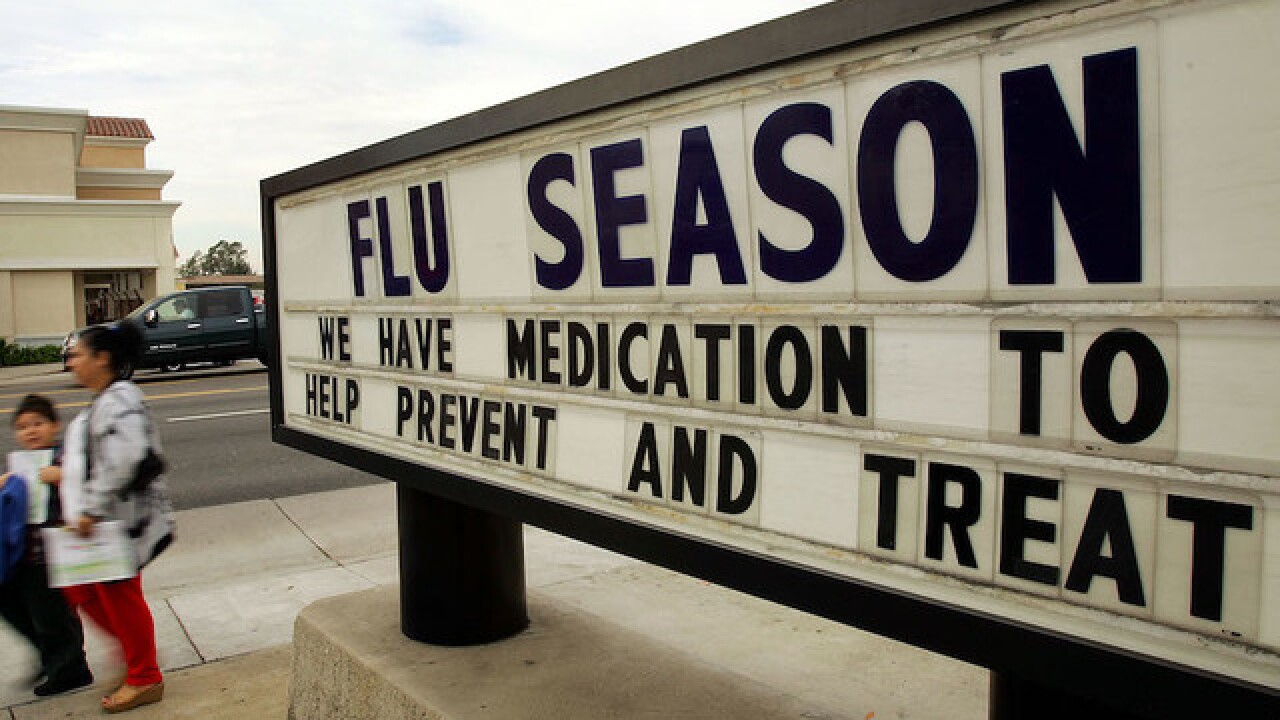 Flu-related hospitalizations rose to about 60 people in every 100,000 during the fifth week of 2018, the US Centers for Disease Control and Prevention said in its weekly surveillance report.

That's higher than last week when the rate was 51 per every 100,000, and also higher than during the fifth week of the 2014-15 season, which recorded about 44 people hospitalized per 100,000. The CDC considers the 2014-2015 season "moderately severe" with high levels of illness, hospitalizations and deaths compared to previous seasons and has used it as a comparison to the current season.

Ten additional flu-related deaths were reported as of the week ending February 3, bringing the total number of children who have died due to flu-related causes to 63 for the season, which began in October.

"We were hoping to have better news to share this week," said CDC acting director Dr. Anne Schuchat adding.

While the Northern border near Canada and a little bit along the west coast show some signs of easing there are "likely many more weeks to go," said CDC Spokeswoman Kristen Nordlund.

Caused by viruses, flu is a contagious respiratory illness with mild to severe symptoms that can sometimes lead to death. Circulating flu strains this season are a mix of H3N2, H1N1 and B viruses. Nordlund said. Anytime H3N2 strains are dominant, as they are now, "we tend to see more severe disease more hospitalizations, more deaths," said Nordlund

"There might be a second wave of influenza B infections," she said. "It's a little too early to say we're out of the woods or to say that flu is abating. We are waiting week to week to see what activity looks like."

According to the report, influenza activity was widespread in 48 states and Puerto Rico for the week ending February 3, which is the same as last week. Oregon and Hawaii, the exceptions, both recorded regional activity for the fifth week of the year.

The CDC also recorded a rise in the percentage of patients who visited health care providers complaining of influenza-like illness across the nation: 7.7% of patients for the week ending February 3, up from the estimated 7.1% during the previous week.

Overall, the data showed 14,094 new laboratory-confirmed cases of illness during the week ending February 3, bringing the season total to 151,983. These numbers do not include all the people who have had the flu, as many do not see a doctor when sick.

Schuchat said last week, "Flu is incredibly complex and difficult to predict and this season is a somber reminder of why flu is one of the world's greatest public health challenges." She added that it's not too late to get a flu shot.

She added that the vaccine may also reduce the severity of symptoms if you catch the flu despite getting vaccinated.

Among adults, the proportion of pneumonia and influenza related deaths climbed to 10.1% of all deaths reported during the week ending January 20 (this data is always two weeks delayed). This rate is higher than the anticipated 7.3% pneumonia or flu-related deaths estimated for the week.

"It's a little too early to say we're out of the woods or to say that flu is abating," Nordlund said. "We are waiting week to week to see what activity looks like."

Schuchat noted, "we may be on track to break some recent records."