Victims of cyberbullying confront more than a rude message online; they encounter abhorrent statements that are criminal.

For one young man, this maltreatment was enough to take his own life.

In September 2010, 18-year-old Tyler Clementi was not only confronted by a cyberbully, the man harassing him lived with Clementi. The man living with Clementi videotaped and published online a private sexual encounter Clementi had with another male.

The rendezvous was tweeted and shared among people across the United States. In response, Clementi, then a freshman at Rutgers University, asked the university for a new roommate. But that was not enough to stop the harassment he was receiving from people across the nation. “We know that Tyler was visiting these sites where all these comments were flooding in from people, and obviously (he) was very disturbed by the comments and that all these people had seen this private act,” Sean Kosofsky, the executive director of the Tyler Clementi foundation said.

“Tyler was freshly out of the closet,” Kosofsky added. “This was devastating for him. Not only was he outed all over the internet, his privacy was violated in a big public way.”
Being disturbed by the cyberbullying he received, Clementi ended his life by jumping off the George Washington Bridge near New York City on Sept. 22, 2010.

“With the language and tactics being used by trolls and cyber attackers,” Kosofsky said, “grown adults who might otherwise be very confident are sometimes pushed to the brink of suicide or depression or faltering their way of life to get away from the harasser.”

“Grown adults who might otherwise be very confident are sometimes pushed to the brink of suicide or depression ...”

Studies show Clementi was not alone. A 2012 study by Dorothy L. Espelage and Melissa K. Holt titled “ Suicidal Ideation and School Bullying Experiences After Controlling for Depression and Delinquency” shows a correlation between being bullied and suicide attempts.

Espelage and Holt’s study shows that middle school students who reported being bullied were 3.3 times more likely to attempt suicide than those not bullied. Suicide is the third-leading cause of death for children aged 10 to 14, and second-leading cause for people aged 15 to 34, according to the Centers for Disease Control and Prevention.

To help those dealing with the effects of bullying and cyberbullying, a foundation, led by Kosofsky, was formed in Clementi’s name. The Tyler Clementi Foundation offers services for organizations and individuals trying to prevent cyberbullying. Among the programs, the foundation offers legal assistance for young people facing cyberbullying or some form of online harassment.

The foundation also conducts trainings for parents in the workplace, educating parents on best practices on combating cyberbullying.

Part of the foundation’s mission, Kosofsky said, is not to reduce suicide. Rather, try to prevent all of the negative effects of cyberbullying with prevention.

“We are focused on bullying and trying to work upstream so the number of the bad effects of bullying like truancy, substance abuse, depression suicide, all of those things that happen later can be diminished with prevention,” Kosofsky said.

What makes cyberbullying different from bullying is not just that messages can be sent electronically, but the bullying can be done anywhere 24 hours a day and harassing messages, images and videos can be distributed to a wide audience.

Twitter is among a number of outlets cyberbullies use to distribute harassing material. According to University of Wisconsin Eau Claire Criminal Justice Professor Justin Patchin, any method of communication that teenagers use could spread troubling material.

“The platforms have changed, the environment has changed, but the behaviors are mostly the same in different environments,” Patchin said. “Early on, it happened in email and chat rooms, and then in MySpace and Facebook and now SnapChat and Instagram and anonymous apps."

“If there is a place teens are hanging out online, there will be cyberbullying there.”

Students Afraid To Speak Out

According to the U.S. Department of Education’s 2013 study on bullying and cyberbullying in schools, it found that 21 percent of students age 12 to 18 were bullied in the 2012-13 school year.

Research has indicated that traditional face-to-face bullying is still more common than online bullying. According to the same 2013 study, 6.9 percent of students said they had been cyberbullied during the 2012-13 school year. But some of the statistics involving cyberbullying were distressing.

Only 23.3 percent of 12 to 18 year olds cyberbullied notified an adult. Boys were three times less likely to tell an adult than girls.

“Most children will tell you that (their parent) is the last person they are going to tell,” Kosofsky said. “Kids are afraid of having their devices taken away and they are afraid that if their parents intervene, they will be humiliated. Parents and kids are not having these open and honest conversations about bullying."

“It is up to the parents to demonstrate success,” Patchin said. “If I get bullied and I come to you for help, and you help me resolve that painlessly and quickly, I am going to run to you next time that happens. But if I come to you and you make it worse, you take away my technology, you say something to the school or the parents of the bully that makes the bullying continue but in a more underground way, I am not going to come to you anymore.”

Patchin said parents need to make their children feel comfortable coming to them about bullies to open a line of communication.

“Parents have to be creative, they can’t just call up the parents of the bully and scream at them,” Patchin said. “They should work with the school because if it is happening online, it is probably happening at school as well.”

For most parents of children being cyberbullied, they did not go to school during the age of social media. That has made it challenging for parents and school administrators to identify cyberbullying, according to 11th-grade student Matthew Skeens.

“Kids have grown up with this technology now, and this is the first generation that has done that,” he said. “Parents are left behind. Parents don’t know how to see all of what is going on, and kids do a good job hiding it, because they know more than their parents.”

Getting cyberbullied puts children in a problematic situation. 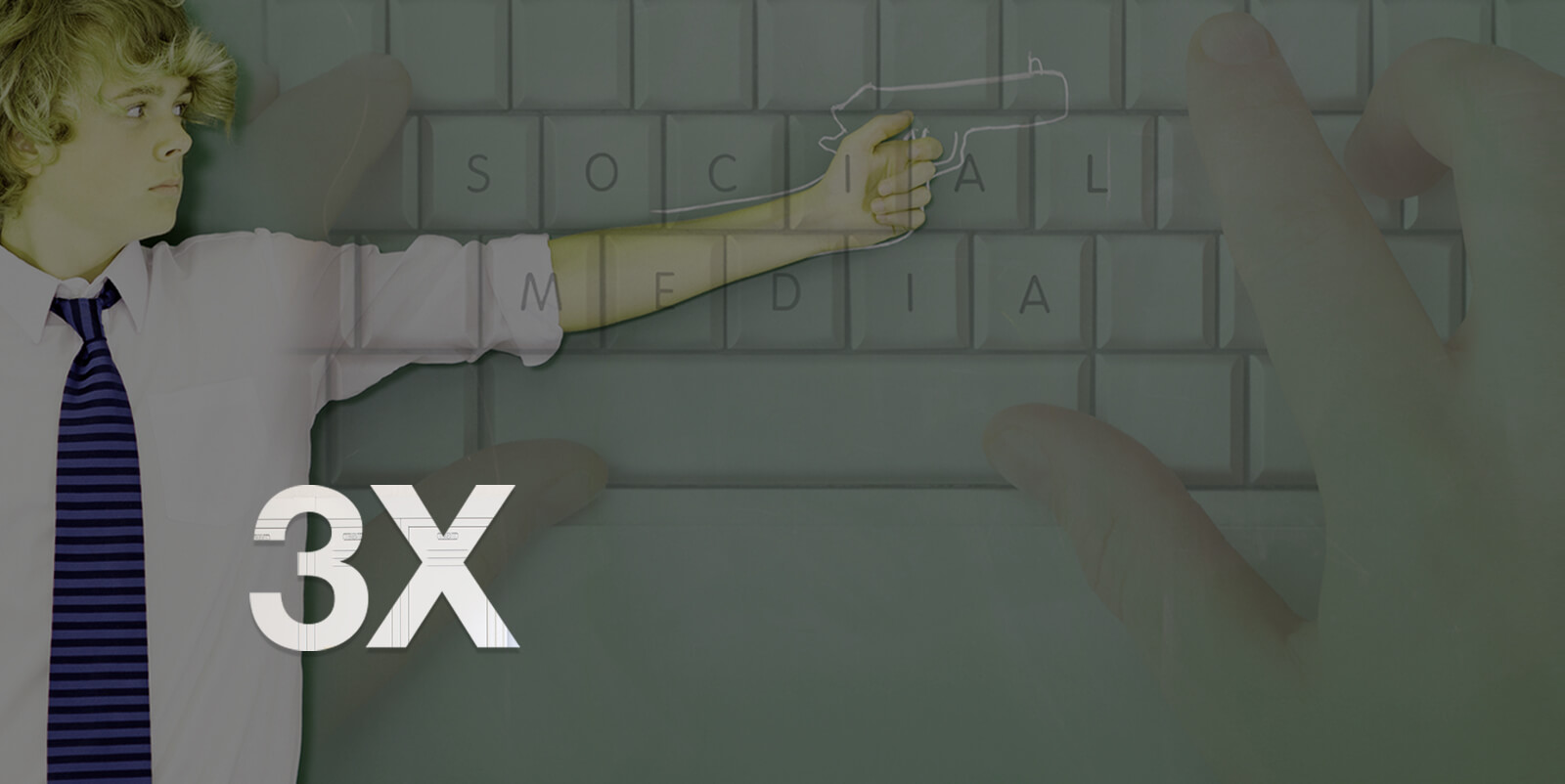 Both Patchin and Kosofsky agreed that schools play an integral role in preventing and identifying cyberbullying.

“If they have a type of climate and culture that we hope for, these kind issues will kind of attention without formally policing the internet,” Patchin said. “If you and I are students together at a school and I see something of a concern happening to you online and I know and I trust my counselor to do something about it, I will tell them. If we have this culture of fear and not wanting to be there, then we are not going to have this conversation about it.

“Ultimately, schools need to make it easy to report incidents of bullying and have procedures on how to follow up on those reports.”

At some schools, students and teachers are taking action.

In Chad Siders’ video journalism class, students created a public service announcement showing the effects of cyberbullying. Siders’ students at Southeastern High School located in southern Ohio hope that the PSA is used to launch a broader anti-bullying campaign at the school.

“I wanted to do something that matters here at school and I know that kids here can get bullied and it is not talked about too much and I wanted to raise awareness,” said Skeens, a student in Siders’ video journalism class. “People don’t talk about it because it happens privately. Most people keep it to themselves and they feel alone, there is nobody to talk to about it.”

Skeens and his classmates came up with the slogan, “Hit the block, go and talk” as part of the campaign. But Skeens said he needs the help of school administrators.

“They have to make sure that students know that they can talk to them,” Skeens said. Siders said part of the issue for schools is cyberbullying happens outside of school hours. “It carries over to the school day,”Siders said. “Who polices that? It is a gray area because it might come to a head at school, but it started at 8 p.m. the night before on social media. I feel there has to be a partnership between students, parents and teachers to make something happen.”

Patchin said most states have laws requiring schools to have anti-bullying and anti-cyberbullying procedures, but schools are not given any guidance on how to address bullying.

“The standard of these laws across the state is legislators say schools, you need to deal with bullying and cyberbullying, but they don’t say what they can do, what they should do, what they must do,” Patchin said. “They don’t provide any resources on trainings or interventions. From my perspective, the biggest thing that is missing is resources. Schools would love to do more to prevent bullying and cyberbullying. More counselors, more activity coordinators, more trusted adults in the lives of these kids.”

Where Is The Line?

While many social media users have been involved in discussions that include rude or disparaging comments, experts agree there is a line between online rudeness and online harassment.

While legal standards differ from state to state, most states have laws against a pattern of directing comments or images toward a person that are threatening and hostile.

“You choose to pick this person and you choose to go after them with multiple, multiple posts,” Kosofsky said. “A rude comment or impoliteness or name calling is rude, but when you decide to target them on that, you punish them for who they are, to have influence over their safety or wellbeing, that is bullying. “

Among the examples of cyberbullying are the transmission of explicit images, death threats and comments that could provoke violence.

While many of those targeted by cyberbullying are in school, Patchin said he receives more calls from adults than teens that are being cyberbullied.

The unnerving part is that more than half of adults who have been cyberbullied said they did personally know their most recent cyberbully.

While most adolescents have a school official that they can report cyberbullying issues to, adults do not have the same opportunity for recourse. This can make things tricky, Patchin said, for adults looking to remedy harassing online behavior.

“It is a very common problem,” Patchin said. “We don’t know the prevalent rates. I think it is more difficult for adults to deal with online harassment. At least for a kid, you have some school-based remedies. If you’re an adult, the only recourse you have as a victim, if the behavior crosses a legal threshold, it becomes a threat or stalking.”

The Cyberbullying Research Center, which Patchin is a part, has developed 10 tips for adult victims of cyberbullying available here: