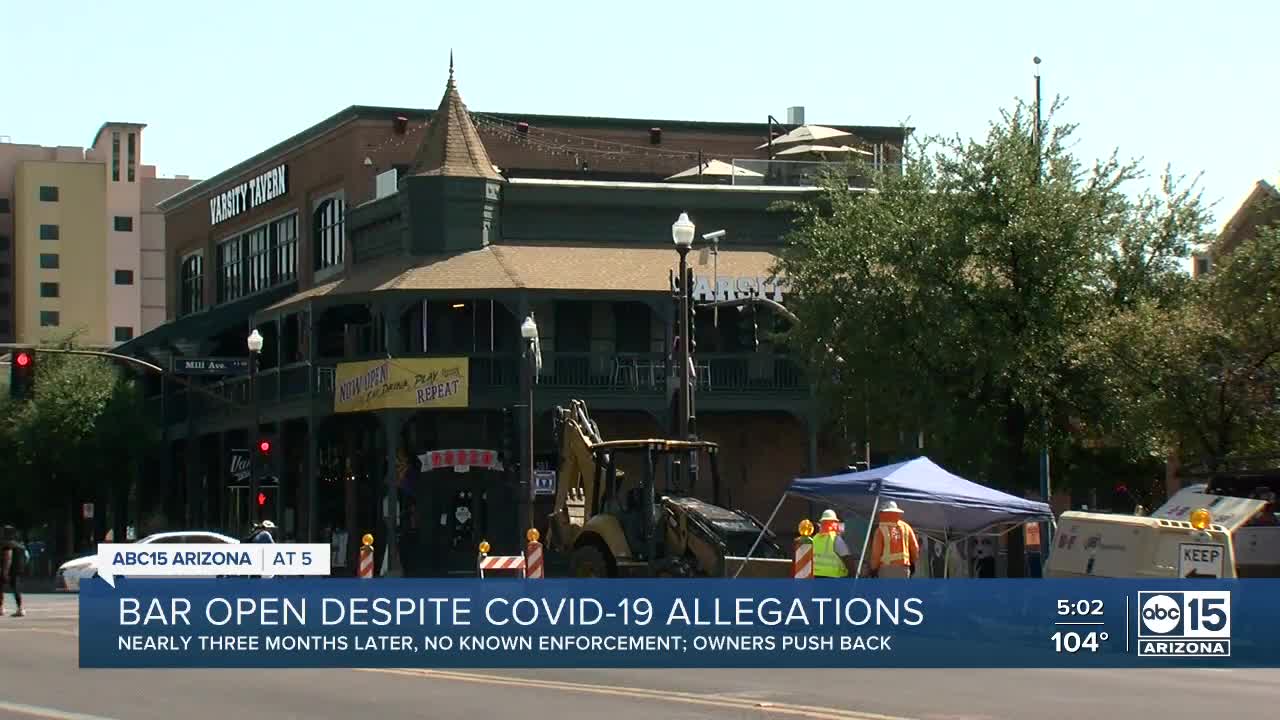 Nearly three months after the state warned its liquor license was in jeopardy, a Tempe bar facing serious allegations related to COVID-19 is back open and pushing back on the claims made against them. 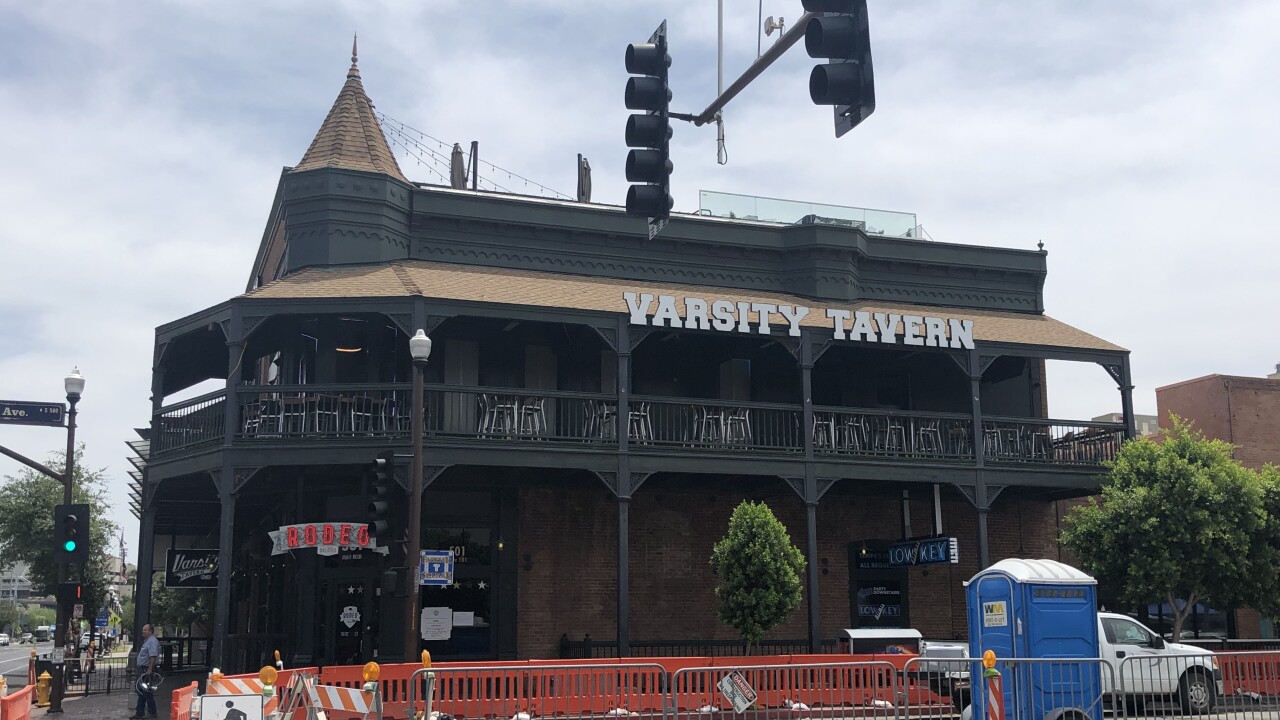 TEMPE, AZ — Nearly three months after the Arizona Department of Liquor License and Control publicly warned that a Tempe bar's liquor license was in jeopardy, that bar is back open and the owner is disputing the allegations made against them.

In early July, the Department of Liquor announced in a news release that it opened an investigation into Varsity Tavern, a high-energy bar located in the heart of Mill Avenue.

The allegations are serious: that management allowed employees who were known to have tested positive for COVID-19 to continue working, that the bar failed to let the Arizona Department of Health Services, other employees or customers know about the exposures, had no written safety policies, and did not enforce social distancing or mask requirements.

As a result, the Department of Liquor's director said he would seek to revoke the bar's liquor license.

Last week, Tempe Mayor Corey Woods, Vice Mayor Randy Keating, and all five council members sent a letter to the Department of Liquor License and Control supporting its enforcement action against Varsity Tavern and to formally condemn the establishment.

"I would like to see something happen here and I don't know what the holdup is," Keating said in an interview with ABC15.

"I am sure they're doing a fair and thorough investigation but there's been plenty of other places that have been acted on much quicker than what has happened here," he said.

Throughout the course of the pandemic, the state has threatened to pull the liquor license of bars and restaurants that did not follow social distancing. In recent weeks, seven businesses have been ordered to close by ADHS for not following the reopening guidelines.

To be clear, no enforcement action has been taken against Varsity Tavern.

On Wednesday, J.D. Ybanez, owner of Texas-based Varsity Tavern, sent ABC15 a statement disputing the state's allegations and insisted that he is taking the health of its employees and guests seriously.

As owners of Varsity Tavern, we take very seriously the health and well-being of our employees and customers. These allegations are completely unfounded, and it saddens us to be singled out in response to unproven, false, and unwarranted claims and accusations regarding our handling of the Covid-19 pandemic.

We have always demanded that our employees not come in to work if they are feeling symptomatic and to be seen by a licensed medical practitioner under any such circumstance.

Since the onset of the pandemic we have instituted strict CDC recommended protocols including temperatures checks at entrance, social distancing, mask enforcement, hand washing, increased sanitization, limiting table size, no congregation, and open-air ventilation. We are confident we will be proven innocent of the baseless claims made against us spurred by a random tip to the state liquor agency.

Restaurants like ours are an important asset to Arizona residents and visitors. We hope to continue providing the city of Tempe with the highest standards of safety as possible during this pandemic and into the future.

Late Wednesday, Trillo said in an email that the state was prepared to issue a summary suspension of Varsity Tavern's liquor license over the summer, but the bar shut down before the state was able to take that action.

"When a liquor license is in an inactive status, a licensee may not deal in alcohol in any manner. By placing the license in active status, and ceasing operations, this negated the necessity and exigency for immediate action by the Department to protect public safety in seeking a summary suspension of their liquor license," Trillo said in an email.

He added that the Department received multiple complaints regarding Varsity Tavern, which led them to issue the "Notice of Violation and Opportunity to Comply" in June.

Since Varsity Tavern reopened in August, the Department of Liquor has conducted "several random inspections...and has not validated any rule violations nor has it received any contemporaneous information of employees being required to work when ill," Trillo said.

He added that none of the other violations that were noted in June have been substantiated since August.

Since then, it has had a short, but lengthy history with the Department of Liquor.

In 2018 and 2019, Varsity Tavern's liquor license was suspended for serving alcohol to minors and after an intoxicated man fell or jumped off the bar's second-story balcony, respectively.

In both cases, Varsity Tavern agreed to pay thousands of dollars in fines and to make operational changes. Its liquor license was then reinstated.

"We have what is an outlier among bad actors," said Keating.