Looking for something to do? A new art gallery has opened at Scottsdale Fashion Square and features 13 immersive artworks.

SCOTTSDALE, AZ — Visitors to one of the newest art galleries in the Valley will be able to "paint" with their bodies using infrared lights and a projection screen, walk through 8,000 lights that illuminate and change colors around them, and be part of a virtual-reality dinner party about an alien abduction.

Those are three of the dozen artworks on display at Wonderspaces Arizona, a 16,000-square-foot gallery opening Friday, April 5, at Scottsdale Fashion Square mall in the former Harkins theater space. The show is called "Point of View."

Pretty cool to see @squidsoup back in the Valley with another art piece. This one, called “Submergence” will be part of @wonderspaces Arizona, a 16,000-square-foot permanent immersive art gallery opening Friday at @ScottsdaleFS. In 2017, they had a similar artwork at @_SMoCA. pic.twitter.com/Z48oX0Po1t

It is also the first permanent space for Wonderspaces, a California-based art collective that showcases immersive artworks from artists from around the world. They have another gallery opening in Austin, Texas in the fall, according to its website.

"I think that the artists that we're partnering with are creating artwork that is interactive in a sense and inviting visitors to engage with it," said Kendall Warson, creative director for Wonderspaces Arizona.

The goal is to bring art to communities in a unique way. "We're trying to be a little disruptive in how we're presenting art," she said.

People are admitted every 15 minutes. Timed-tickets can be bought online, here, for $15-21. Prices are highest on nights and weekends.

Every three to four months the gallery will have new artists.

"Everything you see will be completely different from the furniture to the wall layout to the artwork. What will stay the same is the spirit was what we're building. The guides and teams here that are delivering this experience," she said. 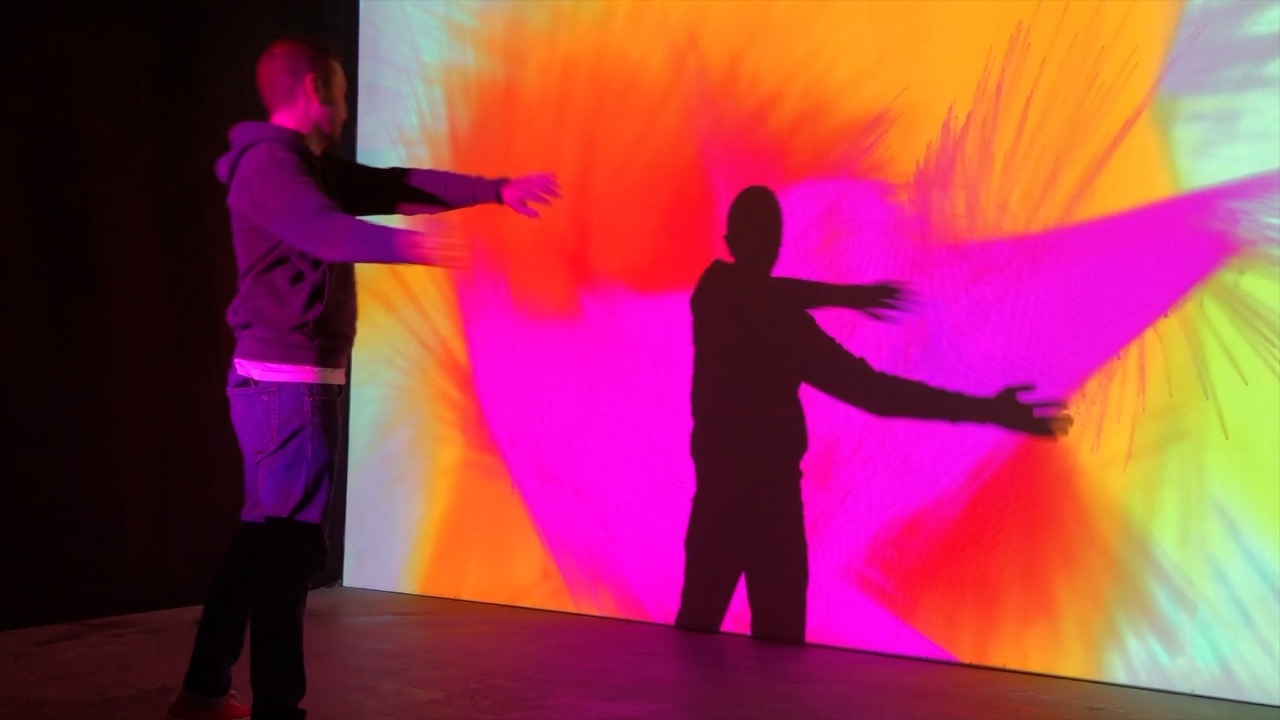 THE ARTWORKS ON DISPLAY NOW

Submergence: An artwork by Squidsoup, an international group of artists. The installation has 8,064 individual lights that are synchronized to music and illuminate and change colors. People can make in between and through the lights. In 2017, Squidsoup had another installation, "Oceans of Light," at the Scottsdale Museum of Contemporary Art.

Body Paint: A visual artwork by Memo Akten. People stand in front of an HD projection screen and infrared came and move their bodies to "paint" colors on the canvas.

Dinner Party: A virtual-reality movie about Betty and Barney Hill, a couple who reported being abducted by aliens in 1961. Guests will sit at a decorated table and wear VR goggles. The artwork was created by Laura Wexler, Angel Soto and Charlotte Stoudt.

Sweet Spot: An artwork that features 19 miles of multi-colored nylon that has been strung from 12-feet high. As people move and shift their eyes, they will notice different "color harmonies" and perspectives. The work was created by Shawn Causey and Mark Daniell. It took 85 people and 1,000 hours to make the piece.

The Last Word: A wall of paper tubes where people are encouraged to "write what has never been said." The red end means someone has already written on that piece of paper. The white end means it is blank. Guests can write their own or read the last words of others. It was created by Illegal Art.

Come Together: More than 2,000 pieces of vinyl-covered wood have been suspended to form the fist of the artist Michael Murphy's girlfriend's raised fist at the Women's March in 2018. Each piece represents one pixel of the image.

Blooms: 3-D sculptures that spin to the rotational equivalent of Phi under a stroke light. It was created by John Edmark.

A Religious Experience: This art piece "connects the night sky and rays of light with spirituality, religion and all types of faith." It is described as an "accurate description" of the night sky.

Transition: A virtual reality experience based on the music of Kettel and Secede that "takes visitors on a journey from one world into the next." It was created by Joosot Jordens and Mike Von Rotz.

Daydream V.2: "An audiovisual installation that distorts space, blurring the lines between what is digital and what is real." It is made up of 18 panels covered with fabric. The artist is NONOTAK Studio.

Black Balloons: A room filled with 280 black balloons. Some are on the floor while some float toward the ceiling. Half are filled with helium and the other half are filled with air. It "explores contradictions, such as lightness and heaviness and attraction and repulsion. It was created by Tadao Cern.

The next show, called "Elseware," is being developed and will feature works that "prompts us to question our reality," according to the website. That show is scheduled to open over the summer.