'White Claw' distribution center to be built in Glendale 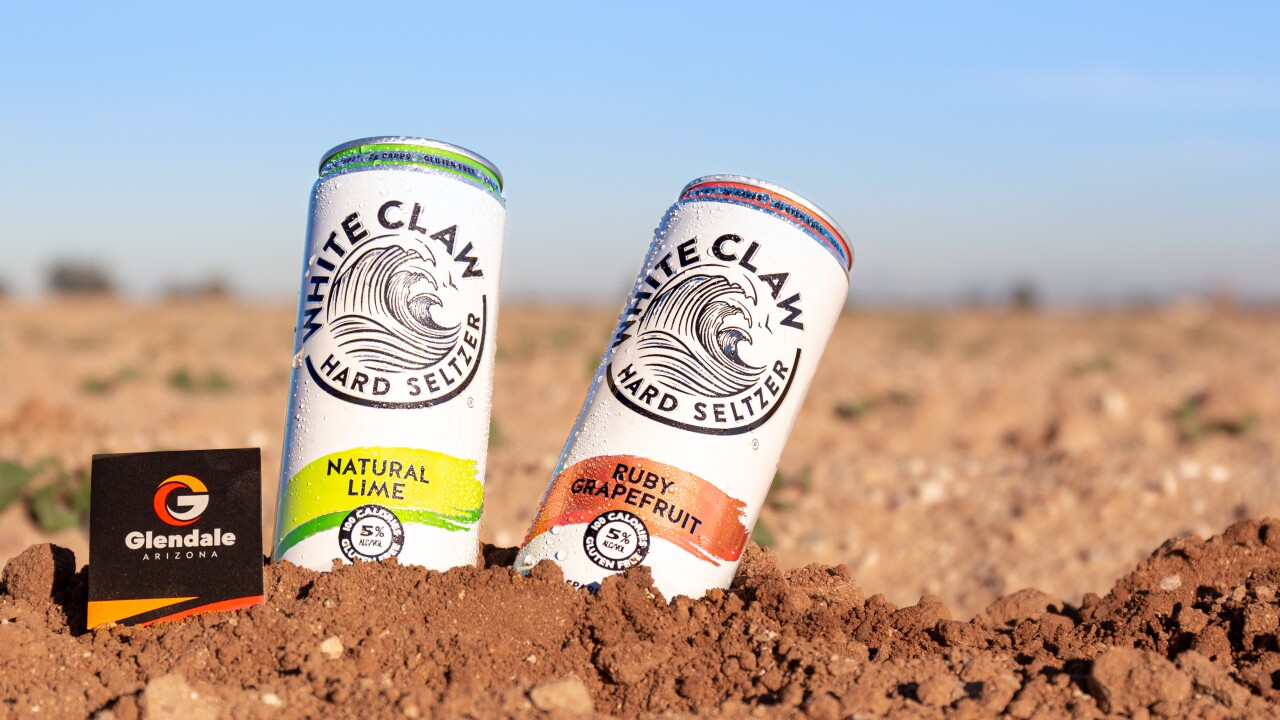 GLENDALE, AZ — The maker of White Claw Hard Seltzer, Mike's Hard Lemonade, and Cayman Jack Cocktails has plans to build a large distribution and manufacturing facility in Glendale to help keep up with demand.

In a news release on Wednesday, the City of Glendale's Economic Development department announced that Mark Anthony Brewing would build a $250 million, 916,000-square-foot, state-of-the-art facility near the Loop 303 Corridor -- an area that the city has called the "New Frontier District" -- and quick.

The facility is expected to be completed and operating by June 2020, which is nearly five months away. It was not immediately clear if construction had started yet.

It is the same area where Red Bull is currently building a 700,000-square-foot facility near Reems Road and Peoria Avenue (that is the building you're seeing in the Facebook Live video below).

“The primary reason we selected Glendale was the innovative thinking and personal support of Governor Doug Ducey, the city of Glendale, the Arizona Commerce Authority, and their willingness to embrace our vision and commit to the support required for our rapid build-out and aggressive timeline,” said Mark Anthony Brewing President John Sacksteder in a statement. “Once complete, this new facility will be a beacon for the advanced manufacturing capabilities of the City of Glendale and the state of Arizona”

After this story was published, Lori German, program communications manager within Glendale's Office of Economic Development, clarified in an email that Mark Anthony Brewing would actually brew and distribute its products out of the proposed Glendale facility, while also housing some of their research teams there to develop new products.

Next week, Glendale's City Council is expected to vote on the proposal.

In its release, the City of Glendale said the facility was expected to bring 200 full-time jobs to the area, in addition to the construction jobs needed to build the facility.

“We’re thrilled that Mark Anthony Brewing has chosen Arizona for their western manufacturing center that will create hundreds of new jobs in the West Valley,” said Governor Doug Ducey in a statement. “We are committed to keeping Arizona the best place in the nation to start and scale a business.”

The "New Frontier District" is a 23-square-mile "emergent area for development providing new industrial, office, and retail opportunities for Glendale and the entire West Valley," according to the City of Glendale's website. The City said there are five miles of development on either side of the freeway's frontage roads available for development.

It also touts the area as "prime for manufacturers and ancillary uses that support the military base" due to its proximity to Luke Air Force Base.

It is one of a number of projects happening in Glendale: Chicago pizzeria Lou Malnati's, Matt's Big Breakfast, Portillo's, and Barrio Queen all have plans to open locations there. Read more on those projects.