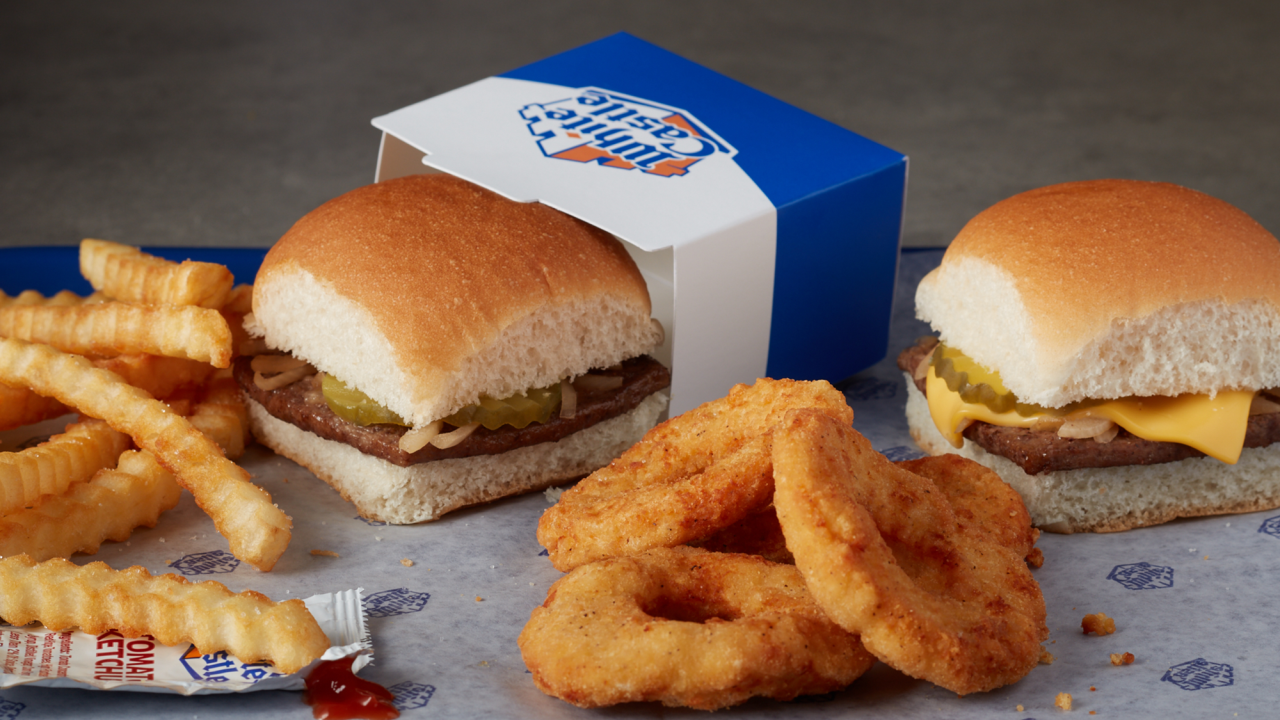 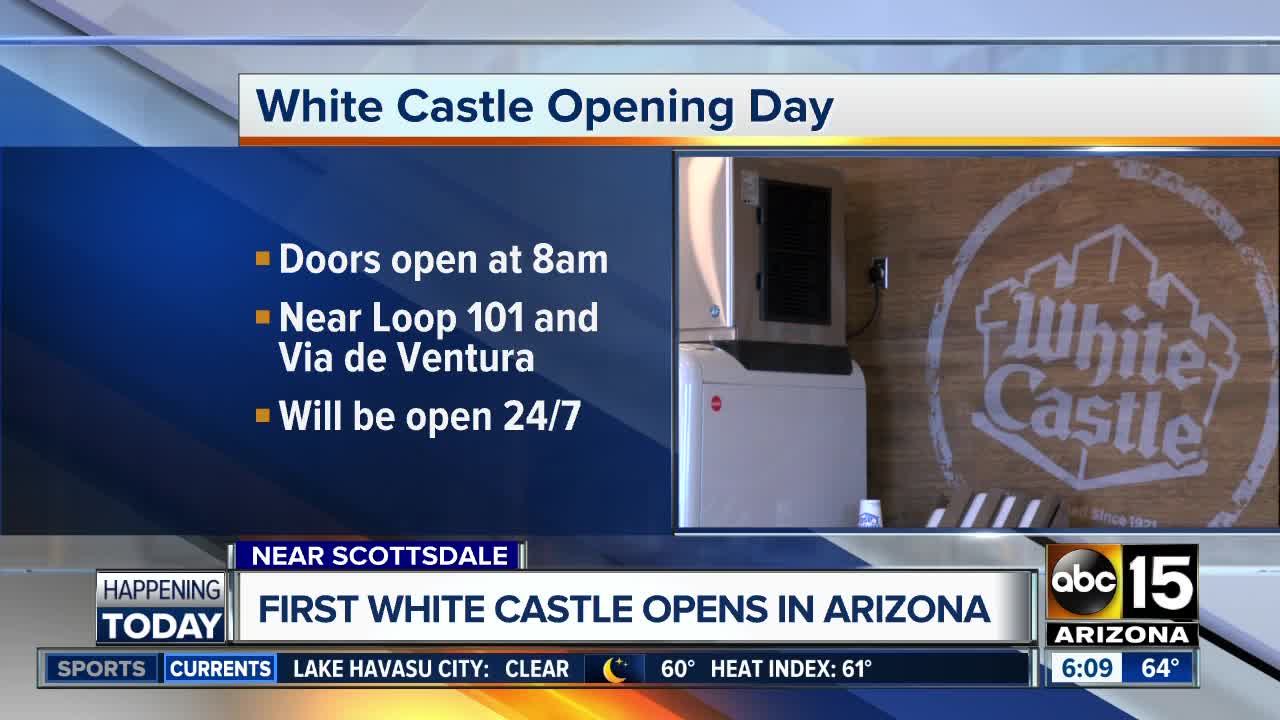 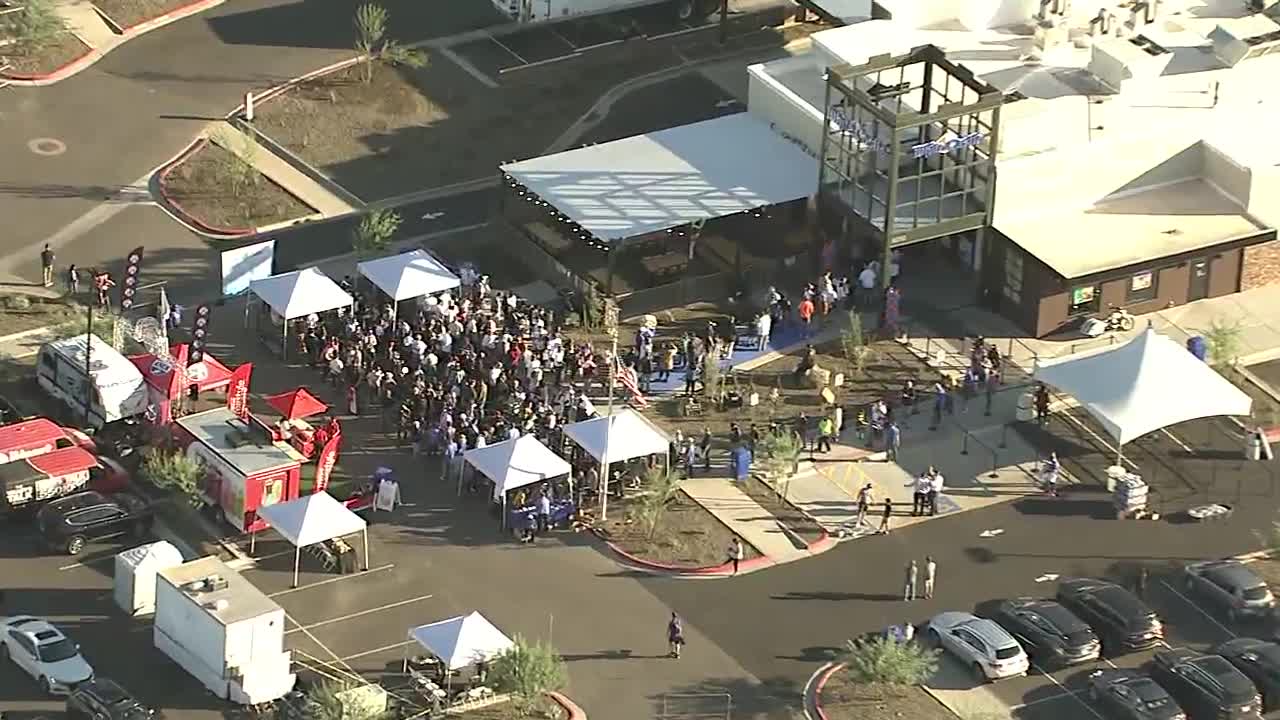 SALT RIVER PIMA-MARICOPA INDIAN COMMUNITY, AZ — Update (Oct. 24): Due to demand, White Castle announced Thursday that it would alter its 24/7 schedule for the "next several days" for its restaurant near the Loop 101 and Via de Ventura. The restaurant will open at 9 a.m. each day and serve customers already in line until 1 a.m. It will then close to restock and re-open at 9 a.m. the next day, according to a statement from Jamie Richardson, vice president of White Castle.

By now you likely know that White Castle opened its first restaurant in Arizona.

Located near the Loop 101 and Via de Ventura on the Salt River Pima-Maricopa Indian Community, near Scottsdale, people were already waiting in line before the ribbon-cutting ceremony took place Wednesday morning and the restaurant officially opened.

A couple from Fountain Hills drove their RV down on Saturday -- four days before the restaurant opened -- to secure their spots as the No. 1 and 2 customers. A man from Gilbert secured his spot as the third customer when he drove his truck to the parking lot on Monday and began camping out.

They waited for this moment since SATURDAY MORNING! We were there as @WhiteCastle super fans Jamie & Drew (from Fountain Hills!) bit into their first sliders from the #Scottsdale restaurant @abc15 pic.twitter.com/agdHzaGyYV

By Wednesday afternoon, some people on social media were reporting hours-long waits to be among the first to order some of White Castle's two-inch-by-two-inch sliders -- whether via a line in the restaurant or the double-lane drive-thru.

White Castle shared a time-lapse video showing dozens of cars waiting in the drive-thru line. "We're excited that you're excited about the #WhiteCastleArizona opening. Cruise on in and join us," the restaurant said in a tweet.

We’re excited that you’re excited about the #WhiteCastleArizona opening. 🚘 Cruise on in and join us. pic.twitter.com/Gf96Ckm4dX

In a text message, Barb Harris of Teamsworks PR, the local PR firm hired by White Castle, was not able to provide a current wait time, but said the restaurant was hit with some big orders after it opened -- "hundreds at a time" -- that backed the kitchen up.

"We have since put in place a 60-slider order limit and the line time is reducing," she said. They have also suspended all online orders and postponed orders through delivery apps, like Uber Eats, Grubhub, and Door Dash, until next week.

White Castle also said it was shutting down from 4 a.m. to 9 a.m. Thursday in order to restock after the busy first day. A spokesperson said the "record-setting turnout gave the 24-hour restaurant no lull in demand well into the wee hours of the morning - a time when the Castle would normally have the opportunity to restock." At 9 a.m., drive-thru and dine-in service will resume.

At 4,589 square feet, it is the largest White Castle restaurant ever, and the first family-owned restaurant west of the Mississippi, according to Jamie Richardson, vice president of White Castle. Prior to the Valley location, the closest to Arizona was located in Las Vegas.

The Scottsdale restaurant has a double-lane drive-thru with a high clearance, digital ordering kiosks; a 1,000-square-foot patio with tables, misters, heaters, and hanging lights; a shop with branded mugs, tumblers, and t-shirts; and Alice Cooper's Corner, a small section of the dining room dedicated to the Rock and Roll Hall of Famer.

The eatery has a re-designed kitchen with the capability of making 240 sliders at one time, Richardson said. It will be open 24 hours, seven days a week with its entire menu available.

It is one of a few White Castle locations to have the 1921 Slider, which is made with fresh beef vs. a frozen patty. It also serves beer, wine, and White Claw inside the dining room.