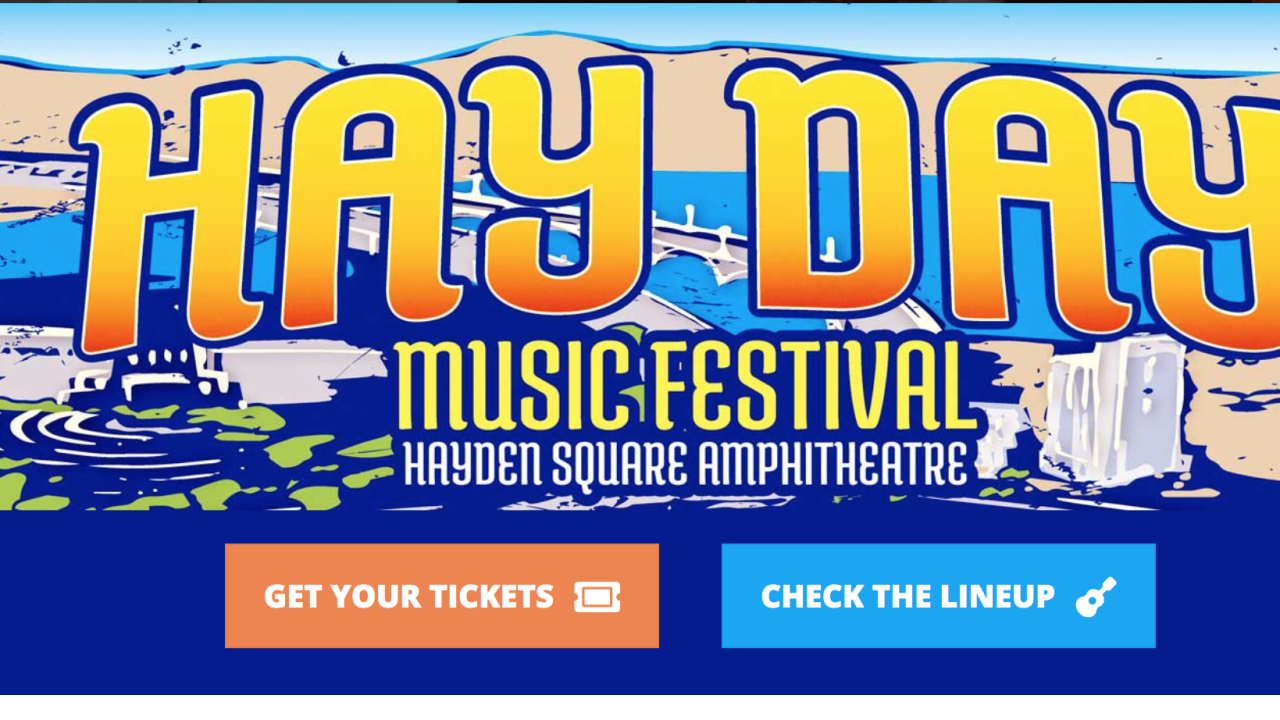 TEMPE, AZ — A new music festival is coming to downtown Tempe in the fall.

The "Hay Day Music Festival" will be held on Saturday, Sept. 28, 2019, from 2 p.m. - 11:30 p.m. at the Hayden Square Amphitheatre, which sits behind the soon-to-open "Teds Refreshments" bar near 4th Street and Mill Avenue in Tempe.

It is one of the latest ventures from Julian Wright, the Tempe restaurateur behind Pedal Haus Brewery, the up-and-coming Ted's Refreshments (more on that later), and founder of Modern Margarita and La Bocca Urban Pizzeria & Wine Bar (two concepts he sold years ago).

He also opened Las Palmas Cantina in the former "Vintage 95" space in downtown Chandler (Las Palmas will close for a week in October and be re-branded as the "Chandler Yacht Club," Wright said.)

The Hay Day event is set to feature nearly a half-dozen local and national acts, including Tempe's own Roger Clyne & The Peacemakers, The Pistoleros, and Las Calakas. Wise Monkey Orchestra, a California-based funk band, and The Hourglass Cats, a Tempe based garage/Reggae group, are also scheduled to perform.

VIP tickets are available for $100 and come with a special viewing area to see the concerts, access to a second-story patio, private bathrooms, private bar, and either four beers from Pedal Haus or two margaritas, the news release said. They can be bought online, tedsrefreshments.com.

The festival is open to all ages around the amphitheater, however, Ted's Refreshments, where Wise Monkey Orchestra and The Hourglass Cats will perform will only be open to those 21-and-up, the event's website states. It will also be limited to occupancy restrictions.

The festival coincides with the grand opening of Ted's Refreshments, an "old school neighborhood" dive bar that will open on Monday, Sept. 16, at 11:06 a.m. in the former "Blasted Barley Beer Company" space, said Wright.

Update: @TedsRefreshment will open on Mon. Sept. 16 at 11:06 pm. It takes over the former Blasted Barley space.

I asked Julian Wright (founder of @pedalhaus) a few weeks ago why the specific opening time: "Our motto at Ted’s is, if it doesn’t make sense, we’re going to try it." https://t.co/NQPC8QSohl

There will be Christmas lights around the 3,800-square-foot bar and neon beer signs and vintage tin signs on the walls, he said. There will be coin-operated pool tables, dart boards, ping-pong tables, and shuffleboard for people to play.

Local musicians and cover bands will also have an indoor stage to perform on, he said.

The bar will have 32 taps, half of which are dedicated to large macro breweries, the likes of Pabst Blue Ribbon, Budweiser, and Coors Light, he said. Wright is also looking for some unusual brews to add to the list.

Local brews, including some of Pedal Haus' brews, and the potential for three wines, will also be on tap, he said.

Two patios will bring an additional 3,000-square-feet outside, plus there will be an outdoor dog park where customers will be able to enjoy a drink and let their dog off-leash, he said.

Wright said when he went to Arizona State University during the mid-90s, the Ted's Refreshment's space was home to a different bar, "Balboa Cafe" -- his "favorite bar in college."

"I spent a lot of time in that building. It's pretty cool to now be putting a concept in there," he added.

Add in another unintentional connection, Wright said he came up with the name -- Ted's Refreshments -- from the menu of another dive bar. Plus, it's a nod to "The Refreshments," the Tempe-based rock band that Roger Clyne was part of in the 1990s (they're known for the 1996 song, "Banditos" and for writing the theme song to the animated TV show, "King of the Hill").

A SPRING FESTIVAL IN THE WORKS?

Wright said the Hay Day festival is intended to be a yearly fall event. He also plans to add a spring festival to the mix as a way to activate the Hayden Square area.

"Back in the day, and this is part of the reason we're doing it," he said, "is Hayden Square was one of the best places for live music in the state of Arizona for that size venue, and a lot of big bands coming through Arizona played there."

The spring festival will be called "Ted's Cheap Beer and Food Festival," he said. No exact date yet (possibly March, Wright said) nor details on who will be part of that event.

We'll have to stay tuned for details there.