These Arizona bars, nightclubs have been closed for alleged COVID-19 violations 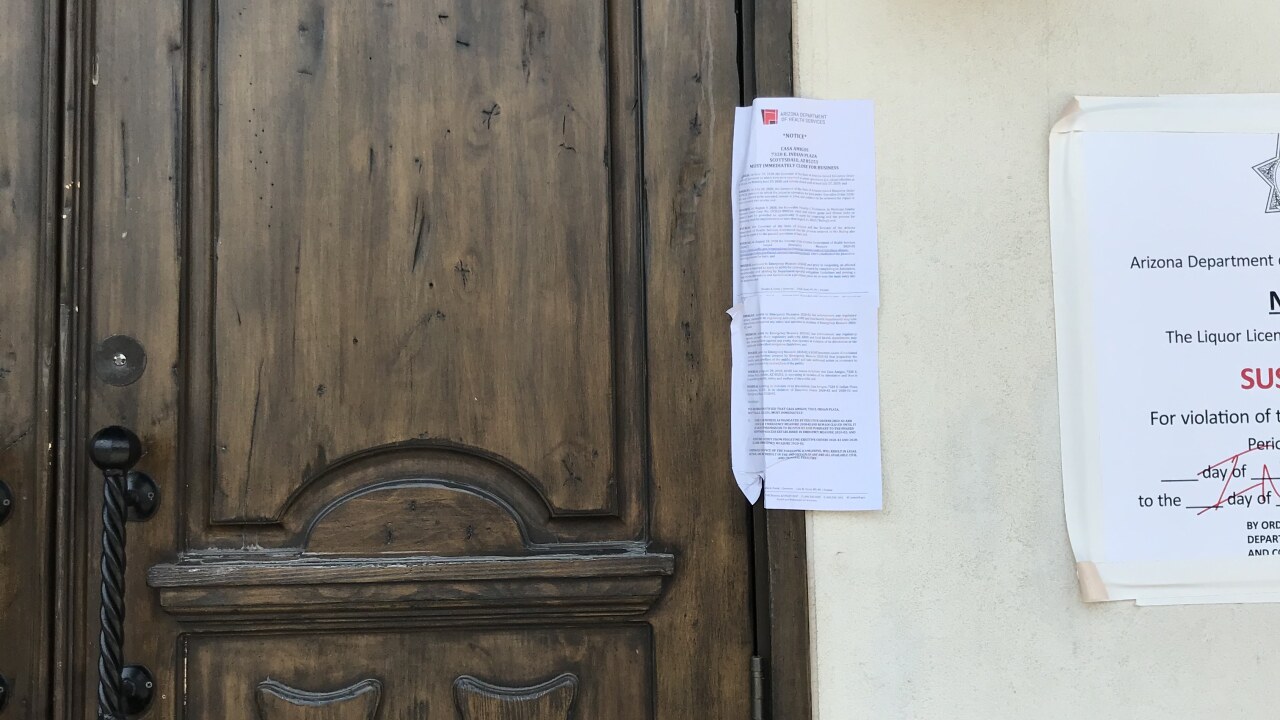 PHOENIX — Nearly four weeks after some bars and nightclubs were allowed to reopen in Arizona, at least seven have been ordered to close and had their liquor licenses indefinitely suspended for allegedly violating the state's reopening guidelines and safety measures.

All of the businesses closed have been located in the Phoenix metro or Tucson.

Bars in several of the state's counties, including Maricopa and Pima counties, were allowed to reopen as early as Aug. 27 as the community spread of COVID-19 reached the state's "moderate" level.

To open, bars had to operate as a restaurant and serve food and had to sign an attestation form through the Arizona Department of Health Services agreeing to strict guidelines and safety measures, such as requiring masks and reducing capacity to 50% or less.

Bars that do not serve food have to remain closed until their county's threshold for community spread is "minimal," and the percent of positivity is less than 3%.

To date, these bars and clubs have been ordered closed by the state:

In every case, ADHS issued a "notice of closure for non-compliance" to the business, posted that notice at the business, as well as a notice from the Arizona Department of Liquor License and Control suspending their liquor license.

Under the order, the business has to remain closed until ADHS gives it permission to reopen and must not further violate the executive and emergency orders.

"Continued defiance of the foregoing is unlawful, will result in legal action, and may result in the position of any and all available civil and criminal penalties," the noticed reads.

The businesses can request an informal settlement conference to discuss potential terms for reopening, according to ADHS Communications Director Steve Elliott. It is not known if any of the businesses have requested such a hearing nor if any have reached a settlement agreement to reopen.

ADHS has created a "COVID-19 Compliance" hotline and website where the public can report businesses for alleged violations. The number is 1-844-410-2157 and the website is www.azhealth.gov/ComplianceCOVID-19.

Movie theaters, indoor gyms and fitness centers, water parks, and tube operators were also allowed to reopen on Aug. 27 as the state's thresholds were met.

To date, 14 of the state's 15 counties have met the threshold for businesses to reopen. Graham County in southeastern Arizona remains in the "substantial" phase, which means bars, gyms, and movie theaters have to remain closed. Greenlee, a small county in southeastern Arizona, is the only county in the "minimal" phase, which allows bars, movie theaters, and gyms to open at greater capacity.

Those industries had been largely closed since June 29 after Gov. Doug Ducey signed an executive order closing those businesses in response to an increase in COVID-19 cases at the time.

Here are the specific opening benchmarks for each industry: