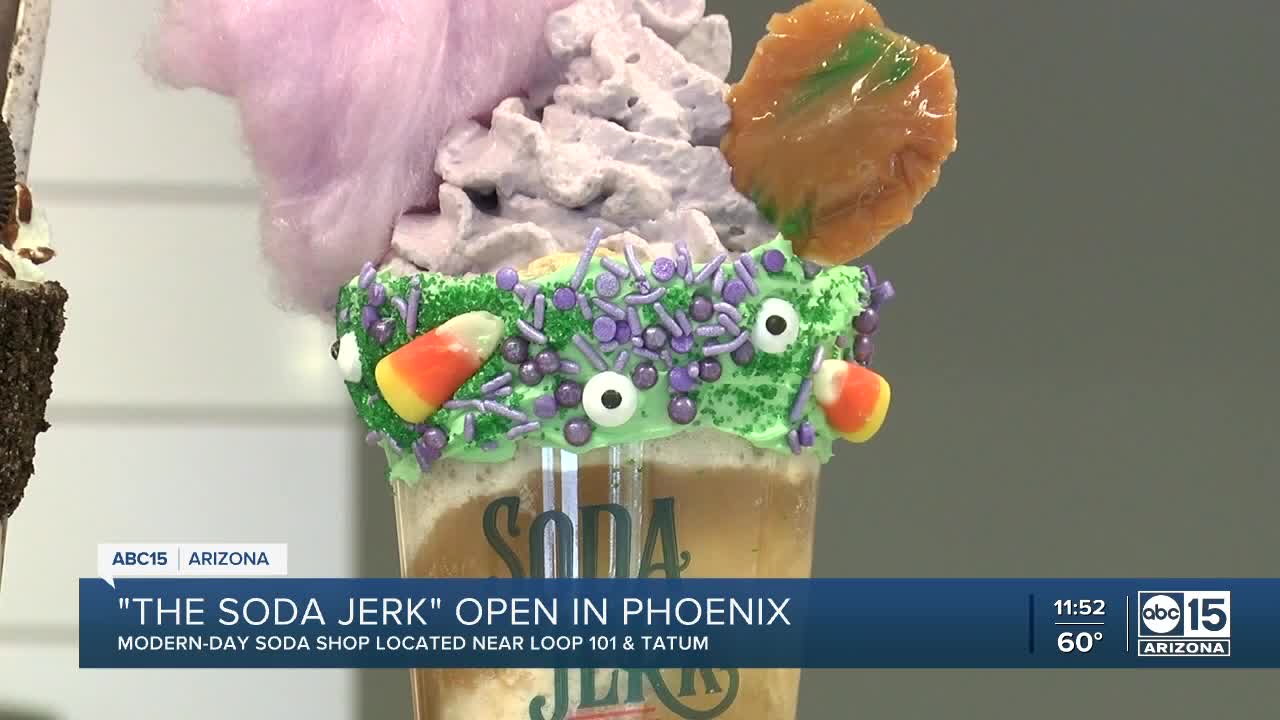 PHOENIX — What is better than a regular milkshake?

It is all on the menu at The Soda Jerk Co. Milkshake Bar -- a small, modern-day take on the old-fashioned soda fountain -- which recently opened at High Street in north Phoenix, near the Loop 101 and 56th Street.

But, don't worry, owners Kylee and Dustin Smith are the "nicest jerks in town," Kylee cheekily told ABC15 on Tuesday. (It turns out, back in the early 1900s when soda fountains were popular, "soda jerks" referred to the employees who helped dispense and make the sodas or ice cream floats.)

As for the milkshakes themselves: "they're huge, they're exciting, they're fun, and they're delicious," she said.

The menu is divided by shakes and floats, referred to as "killer shakes" and "killer floats." They have five regular shakes, eight signature shakes, as well as five classic floats and six signature floats.

They also have a specialty "Hocus Pocus" float for Halloween.

Here are a few of their signature shakes and floats:

A classic soda is $2, classic shakes and floats are $6, and their signature shakes are $12.

The husband-and-wife owners said while this type of concept is popular on the East Coast, they had not seen it in Arizona, which prompted them to create it themselves. Liking ice cream helps, too.

It is a small space. There are eight stools at the counter and two tables outside.

The Smiths are also opening an immersive escape room at High Street called "The Nemesis Club."

As the story goes, to get to the "secret" escape room, players have to find the "secret" entrance within The Soda Jerk Co. space.

Dustin said The Nemesis Club will have multiple immersive escape room experiences. Two of the games are expected to open by the end of the year, he said. More will open after that.

The premise behind The Nemesis Club is that the superheroes and villains have grown tired of fighting each other and decided to get together and have some fun. So, they created their own secret social club -- The Nemesis Club.

A handful of new concepts have opened at High Street since the beginning of the year.

The Stir, a coffee shop that serves regular and boozy coffee drinks, as well as boozy milkshakes, opened in February. Gin & Reel, a "secret" Hollywood-themed cocktail lounge also opened in February behind The Stir (hint: meet at the phone booth).

In August, The Boozy Breakfast, a breakfast and lunch restaurant, also opened at High Street.

Nori Sushi is moving from Desert Ridge Marketplace to High Street and is expected to open sometime during the fall or winter. An opening date has not yet been announced.