The Good Life Festival is moving to Schnepf Farms: See the lineup 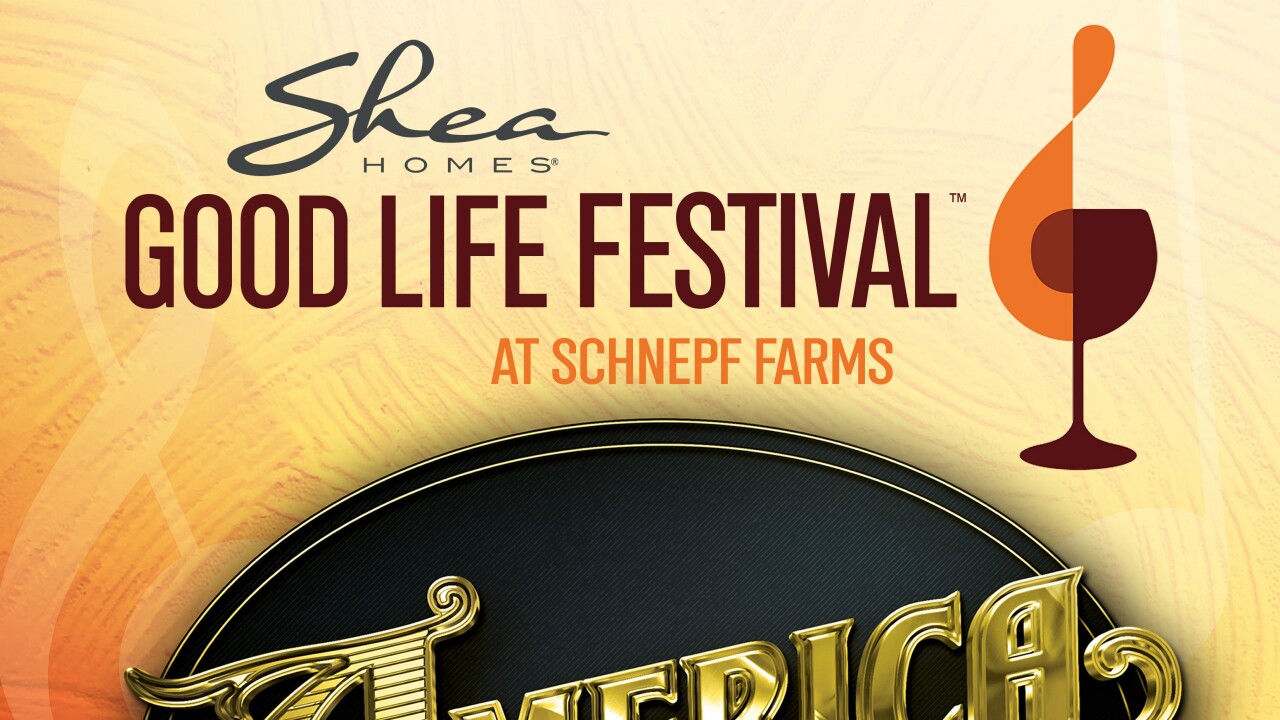 QUEEN CREEK, AZ — The Good Life Festival, a music festival that has featured The Beach Boys, The Band Perry, Joan Jett and the Blackhearts, and Creedance Clearwater Revisted in the past, has found a new home at Schnepf Farms in Queen Creek.

The music event will be held on Saturday, March 28, 2020 and will have performances by Nate Nathan and The MacDaddy O's, The Guess Who, Don Felder, and America. Tickets are expected to go on sale to the public on Thursday, Jan. 23, via www.thegoodlifefest.com.

For the last nine years, the festival was held at Encanterra in San Tan Valley, partly as an event for its homeowners, but also as a way to promote the resort-style community to potential home buyers, said Hal Looney, area president for Shea Homes, in an interview with ABC15.

As the festival grew and more homes were built, the community essentially ran out of spots to park vehicles for the 5,000-5,500 people who would attend, he said.

"We had no idea it was going to get this kind of popularity and when we first started, we first struggled to sell 1,000 to 2,000 tickets," said Looney. "Then over the years, I think people learned about it [and] referred their friends out to come see it, and ya know, a big percentage of the participants every year are first timers."

As a result, in December 2018, organizers announced that the large-scale festival would end with the 2019 event, which featured Creedence Clearwater Revisited and Three Dog Night as co-headliners. Instead, smaller events featuring cover bands were held at its communities.

"The great thing about this is we can have this really big festival and it's going to be even bigger because Schnepf Farms can handle a lot more people and the parking and everything," he said. "We're just really excited."

Carrie Schnepf said "we're really excited because back in the early 90s, one of the first festivals we ever hosted was Country Thunder USA when we took 250 acres of our farm and turned it into a big music festival. We did that for nine years and fell in love with hosting festivals. It's been a dry spell so we're very excited that The Good Life Festival has decided to continue to grow here on the farm."

"And I think it's going to be great to keep it in the community too. I mean, it's such a fun event. It really attracts all ages. It attracts those young kids like my daughter who's into the oldies and it attracts me who's old and likes the oldies," she said.

IF YOU GO:
The Good Life Festival (March 28, 2020)
Where: Schnepf Farms in Queen Creek
www.thegoodlifefest.com