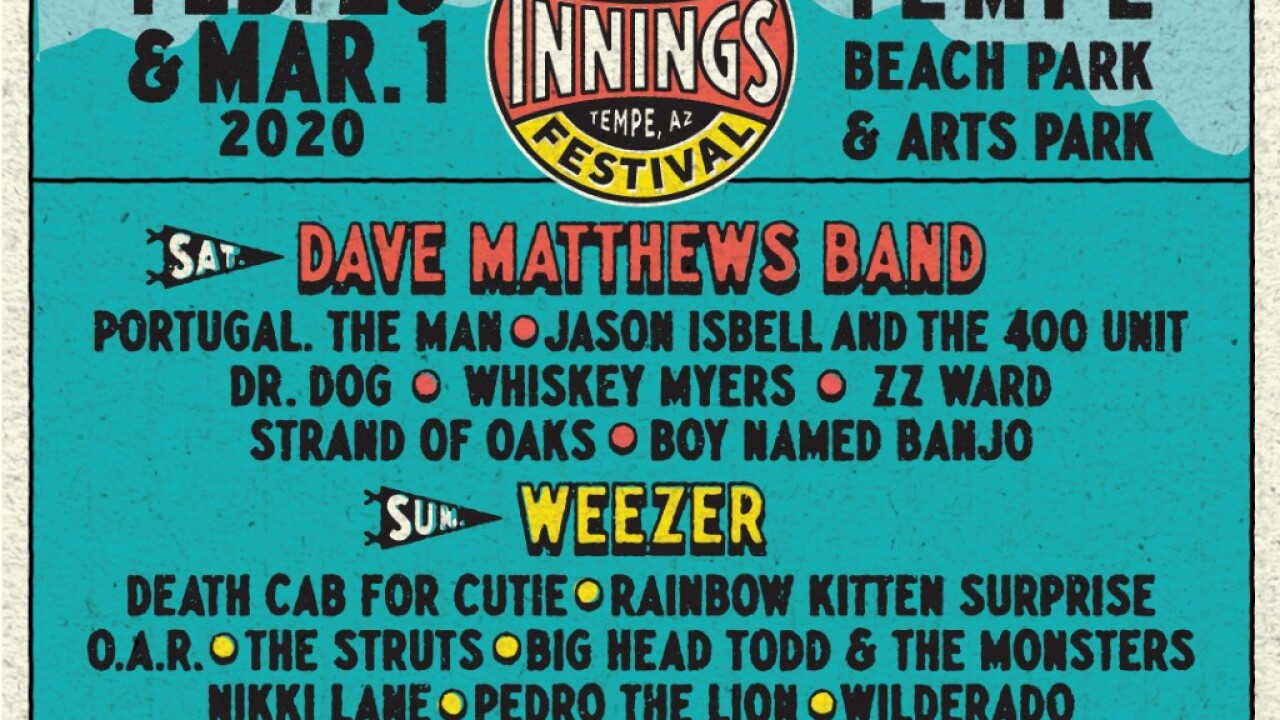 TEMPE, AZ — The lineup for the 2020 Innings Festival has been announced.

Dave Matthews Band and Weezer have been tapped to headline the two-day musical festival, which will return to Tempe Beach Park for its third year on Feb. 29 and March 1, 2020.

Here it is your 2020 #InningsFest Lineup! Grab your 1-Day or 2-Day tickets at 12pm TODAY to see Dave Matthews Band, Weezer, Death Cab for Cutie, Portugal. The Man, Jason Isbell & the 400 Unit, Rainbow Kitten Surprise and more, in Tempe this Spring. https://t.co/zUM3MLHN2O pic.twitter.com/qbRocxISRs

The festival, which routinely coincides with Spring Training, will also feature appearances from Off The Mound's Ryan Dempster and guests; Jake Peavy; Bret Saberhaden; Miguel Montero; Aaron Rowand, and others.

Dave Matthews Band is scheduled to perform on Saturday, Feb. 29, and Weezer will perform on Sunday, March 1.

Tickets are scheduled to go on sale at noon at InningsFestival.com. Single-day tickets start at $99 and two-day passes start at $139, according to the website. There are upgrades available for private restrooms, special viewing areas, VIP lounges, and complimentary beer. The highest ticket -- a two-day "platinum" pass -- starts at $950.

A spokesperson for the festival previously told ABC15 that 25,000 people attended the 2019 festival, which was headlined by Incubus, Eddie Vedder, Sheryl Crow and Jimmy Eat World.

During the festival's inaugural year, 2018, it spanned three days and was headlined by Queens of Stone Age, The Avett Brothers, and Chris Stapleton.

The festival is produced by C3 Presents, who also puts on Chicago's popular "Lollapalooza" festival and "Austin City Limits" in Austin, Texas.