Scottsdale bars and restaurants shutting down due to COVID-19; one charged with misdemeanor 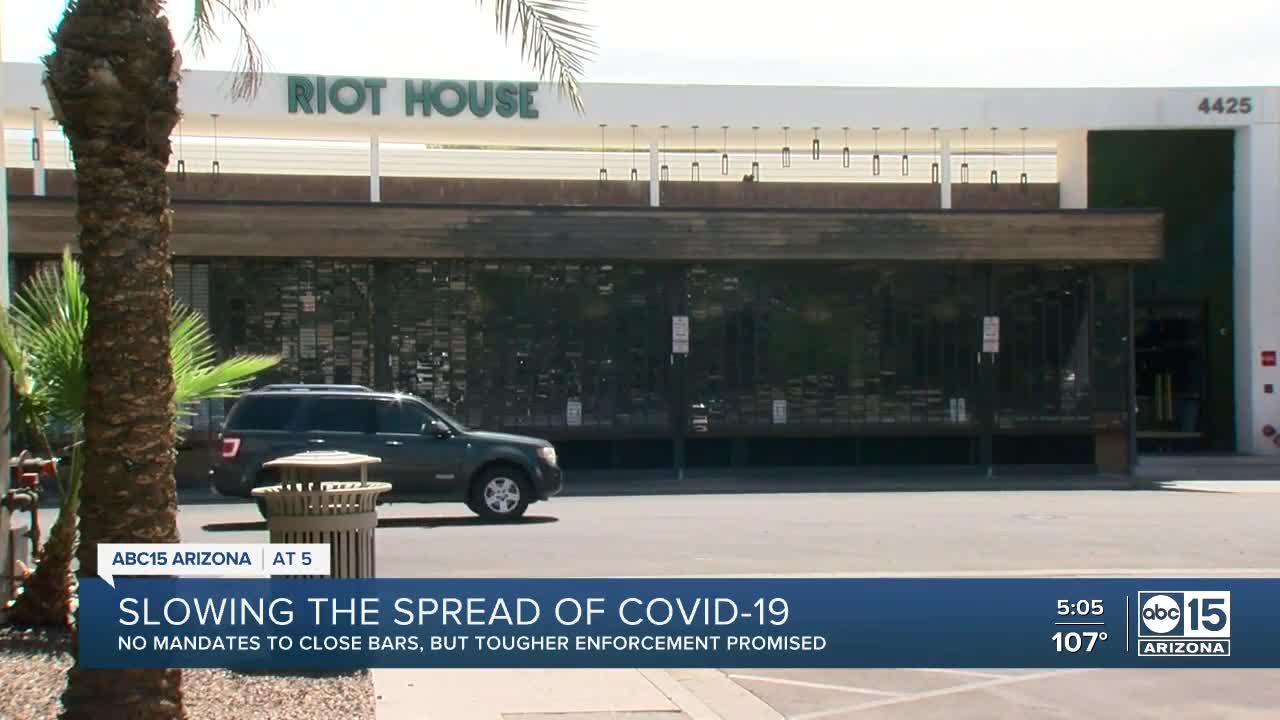 There have been no mandates to close the bars, but tougher enforcement has been promised. 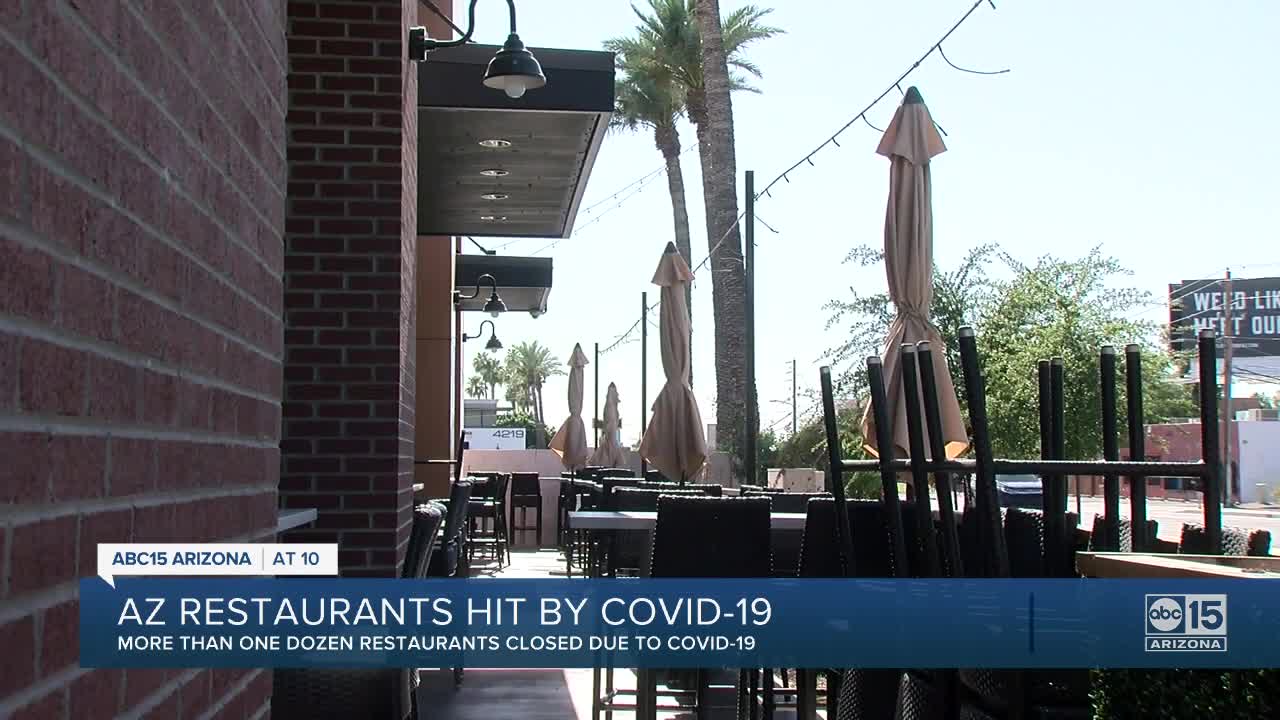 The charge, a class one misdemeanor, carries with it a maximum fine of $2,500 and three years probation, according to the City of Scottsdale.

Lissa Druss, a spokesperson for Riot Hospitality Group, told ABC15 Thursday evening that Riot House, along with El Hefe and Dierks Bentley's Whiskey Row, would close their Scottsdale locations through Sunday in an effort to "reduce congregation." El Hefe's restaurant in downtown Tempe and Dierks Bentley's Whiskey Row's locations in Gilbert and Tempe would remain open.

As to the charges, Druss said earlier in the day, "We have yet to see the evidence that supports this violation and will respond to this in due course."

Eight additional bars, restaurants, or nightclubs within Old Town Scottsdale were also given final notices to comply with the social distancing requirements, Arizona Gov. Doug Ducey said Thursday. If those bars do not comply, they could have their liquor licenses suspended or revoked.

"Bad actors will be held accountable," he said.

Late Thursday, Jeffery Trillo, assistant director of the Arizona Department of Liquor Licenses and Control's Licensing and Administration Division, said Wasted Grain in Scottsdale received a "final notice to comply" after the governor's press conference, bringing the total to nine.

.@dougducey points out that the city of Scottsdale has filed charges on Riot House. pic.twitter.com/LVZhZqVHj0

Trillo added that the liquor department has not filed any charges or sanctions of its own against any of the businesses. That would be determined after reviewing the Scottsdale Police Department's information or through its own investigation.

"The department will continue to lead with education for voluntary compliance, but does have the ability to suspend or revoke a license should it be necessary," the department said.

Scottsdale police said they observed both customers and employees at Riot House last weekend "not practicing physical distancing, not wearing face coverings, and not complying with their plan."

"Since COVID-19 re-opening processes were put into place, @ScottsdalePD have worked frequently and proactively with restaurants in the city to ensure an understanding of the rules and seek compliance. Most establishments are successfully navigating the new rules and required operating procedures. I hope the criminal charges filed here will further encourage these particular businesses to follow the law," said Scottsdale Mayor Jim Lane on Thursday.

Since COVID-19 re-opening processes were put into place, @ScottsdalePD have worked frequently and proactively with restaurants in the city to ensure an understanding of the rules and seek compliance. 1/

Evening Entertainment Group (EEG), which runs Bevvy, Casa Amigos, Hi-Fi Kitchen & Cocktails, and Bottled Blonde, said in a statement on Thursday that it has been "steadfast in our intentions to operate our restaurants responsibly, and within guidelines provided by city, state, and the CDC."

"We will continue to work as a team, together with our guests, to uphold the guidelines while operating our business," the statement read. "We're reviewing our approach on all levels and will work to provide a safe environment."

On Friday, EEG moved to close its Scottsdale bars, citing the uptick in COVID-19 cases.

"We made significant efforts to maintain a safe environment, but feel that temporarily closing is the best way to support our team and our guests during this current spike. We will continue to monitor the situation, maintain open lines of communications with city and state officials, and will share updates on our reopening schedule as they become available," owners Les & Diane Corieri said in a statement.

"The team at Maya Day & Night Club has been strenuously enforcing the protocols set by the CDC, the State of Arizona, and the City of Scottsdale for the operation of entertainment venues. Unfortunately, some of our patrons have aggressively refused to abide by our operational guidelines and we have no choice but to cease operations for this period of time - and possibly longer - in order to be responsible in support of State and City efforts to preclude the spread of COVID 19," said Jason Adler, director of operations at Spellbound, in a statement.

“We take what’s occurring very seriously and with an abundance of caution. Every measure in our action protocols is in accordance with Maricopa County Department of Heath's guidance, CDC protocols and the City of Scottsdale requirements during this Covid 19 period," he said in a statement. "Square One Concepts has been committed to adopting and implementing thorough measures to protect our staff and customers during these uncertain times. It was decided to close Wasted Grain through the end of July and possibly longer this summer. We care about our city; it’s where we are headquartered and we are assessing next steps forward during this rapidly changing environment.”

The status of Pattie's First Avenue Lounge is unknown.

Scottsdale's nightlife has been a focal point for an apparent lack of social distancing since Gov. Ducey lifted his stay-at-home order on May 15, prompting restaurants and other food establishments to reopen their dining rooms.

Over the last several weeks, people have posted videos to social media showing crowded bars and clubs in Scottsdale, as well as people congregating in the street.

Last week, faced with an uptick in positive COVID-19 cases in the state, Gov. Ducey issued a new executive order that now requires restaurants, bars, and businesses to implement plans for social distancing, including reducing capacity and installing six-foot markers and other signage.

Previously, Ducey's guidance, while similar, was more of a recommendation.

Ducey also allowed local cities and towns to decide whether or not to require masks. Most in the Phoenix metro, including Scottsdale, have mandated that masks be worn while at restaurants and businesses.

In recent weeks, several businesses and restaurants in the Phoenix area have temporarily closed, again, after self-reporting employees and others who have reportedly tested positive for COVID-19.

On Thursday, a spokesperson for Riot House Hospitality also confirmed to ABC15 that five employees at Dierks Bentley's Whiskey Row in downtown Gilbert have tested positive with coronavirus. That location will not be among those closing in the next few days.

In a message to employees, the restaurant said, "Arizona continues to be one of the states seeing the highest number of COVID-19 cases. Unfortunately, those cases are now touching our Whiskey Row Gilbert, and we now have a fifth employee who has tested positive."

"While we cannot control who comes in contact with it and when, we are reminding our staff to be extra vigilant, both at work and on personal time, to take necessary precautions to limit your possible exposure of COVID-19," the message said.