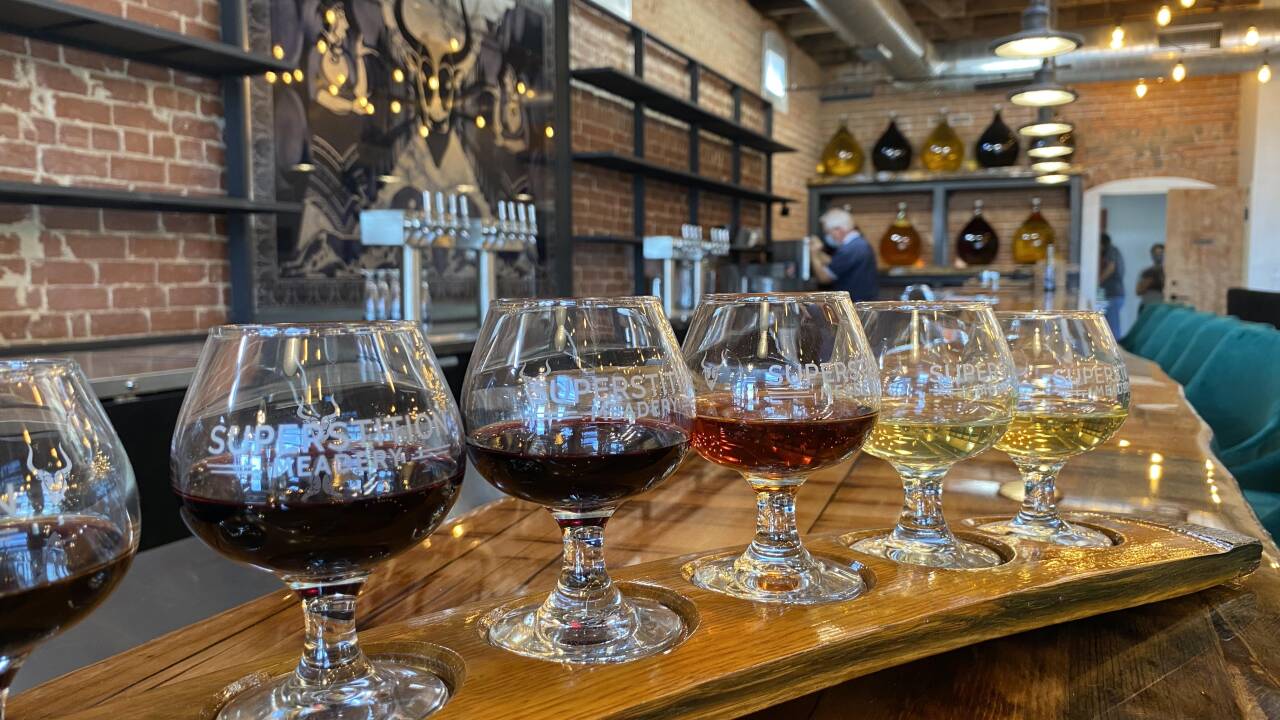 PHOENIX — Not far from Chase Field in downtown Phoenix and conveniently situated along the light rail tracks, construction is nearly complete on Superstition Meadery's expansion to downtown Phoenix.

No official opening date yet, but we're told the opening is not far off, possibly in early November.

Based in Prescott, Superstition Meadery makes and serves mead, an ancient alcoholic drink that is made from fermented honey and water, as well as ciders and wines.

Over the last eight years, they've gained a loyal following in downtown Prescott, expanded their taproom, built a separate production facility to increase supply and meet demand, and have begun to distribute their mead concoctions across the United States.

"Mead is -- it’s really hard to classify. It can just be like a wine, just like a beer, just like a cider. It can have its own sort of flavor profile you’ve never had before," Jeff Herbert told ABC15 in a recent interview.

It can be carbonated, petillant (semi-carbonated), or still, dry, semi-sweet, or sweet, and made with different fruits and herbs for added flavors and spices, Herbert said.

At the downtown taproom, Jeff and Jennifer hope to meet a new customer base and educate them on mead, what it is, how it's made, and what it tastes like.

"Our biggest challenge is no one knows what meads is and it's expensive to make it, which means it’s expensive to sell it. And so, we have to get people just to try, to change your mind, and say hey, maybe I’ll give this a shot," he said.

The Phoenix taproom is located in the historic "Jim Ong's Market" building, built in 1929, near Washington and 11th Street in Phoenix, and within walking distance of the Washington Street and 12th Street light rail station.

It will have 24 taps, serving mostly meads, as well as ciders and wines. They will not serve beer or liquor.

Through construction, they worked with the city's historic preservation department and Verde Building Corporation to restore and renovate the building, keeping a good amount of the building's original framing and work.

The main windows in the front, most of the doors, wood buttresses in the ceiling, skylight, and flooring are all original and were restored, Herbert said. They worked with Verde Building Corporation to handle construction and restoration.

The bar top is made out of wood from northern Arizona and its base is made out of old whiskey barrels used to ferment some of their meads, said Herbert.

There are more than a dozen seats along the bar and another set of barstools on the other side of the room that overlooks the kitchen and prep areas. In the middle, people will find lounge-style seats and chairs.

There is an outdoor patio where people will be able to sit and eat beneath suspended garden lights, and a store with branded shirts, hats, and glasses in the back.

In terms of food, the kitchen will offer a mix of small plates and favorite dishes that Herbert and his wife tried and tasted during their international travels.

Each menu item will have a recommend mead or cider that it can be paired with, said Herbert, declaring that it also makes them the "world's first mead and food-pairing restaurant."

The parking lot is the smallest part of the restaurant with 11 spots in total, though there could be street parking nearby.

So, no opening date yet, but one is brewing -- or fermenting.