Amid spike in COVID-19 cases in Arizona, Medieval Times delays reopening of its Scottsdale castle 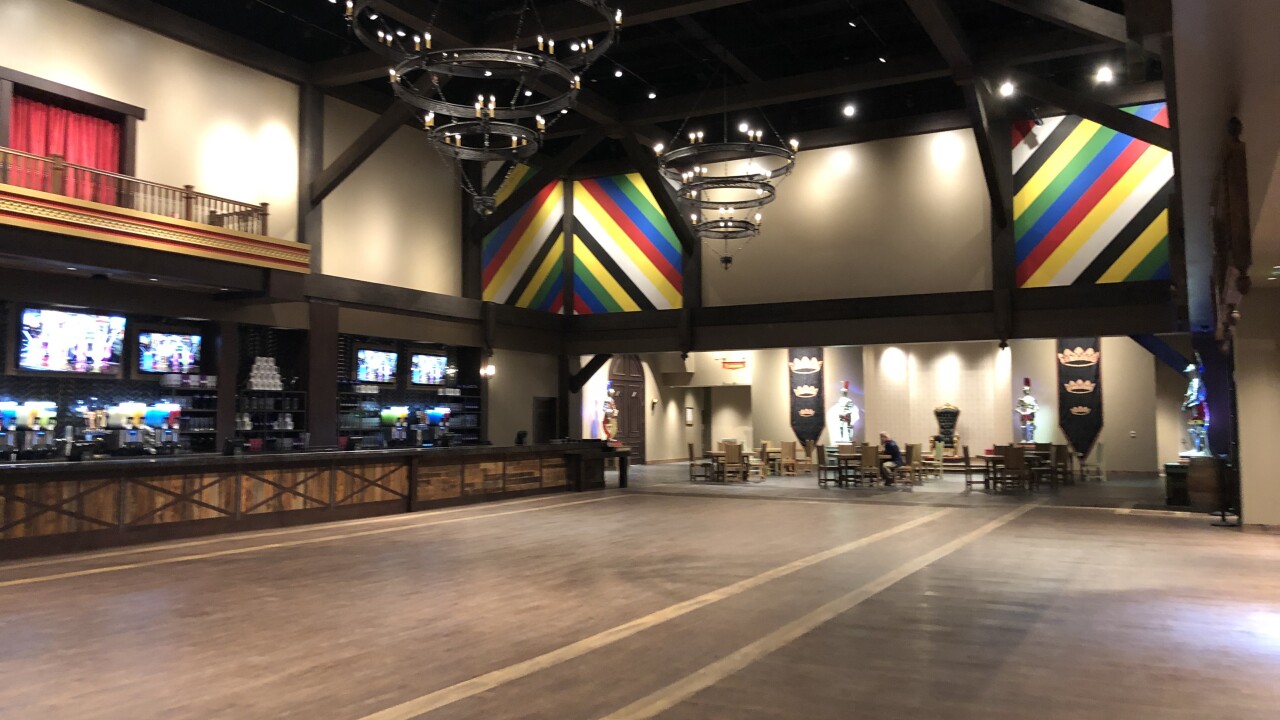 Josh Frigerio, ABC15 News
Hear ye! Hear ye! Medieval Times invited members of the press to see inside its new castle in Arizona. It was built near the Loop 101 and Via de Ventura on the Salt River Pima-Maricopa Indian Community, near Scottsdale. It will hold its first public show on Friday, Aug. 2, 2019. Guests can enjoy a 2 1/2 hour show with knights, jousting, and horsemanship, a four-course meal, and a &quot;Hall of Arms.&quot; There is also a torture museum ($2) where people can see replica torture devices from the era. Tickets are $36-$46 per person.

PHOENIX — Update (June 30): In a statement, Medieval Times said it would no longer reopen as initially planned on July 5. Though located on the Salt River Pima-Maricopa Indian Community, Medieval Times said it would remain closed until July 27, which coincides with Arizona Gov. Doug Ducey's executive order that banned gatherings of over 50 people and forced gyms, movie theaters, and water parks to close.

“Our guests’ and team members’ safety will always take precedence over profits,” said Perico Montaner, president and CEO of Medieval Times, in a statement. "Our sincerest apologies to our guests and fans who were ready to join us in reopening the castle. As much as we would love to reignite the magic of Medieval Times for Valley residents, it is our duty as a member of the Arizona community to follow Governor Ducey’s advice and encourage guests to stay safe and to stay home."

Medieval Times, the dinner theater known for its jousting tournaments and utensil-less meal, will reopen its Arizona castle on Sunday, July 5.

"We are excited to welcome you back to our Castles," read a message on the dinner theater's website. "We've created an extensive reopening plan with direction from health experts and government officials."

The Arizona castle, located within the Salt River's Talking Stick Entertainment District, near Loop 101 and Via da Ventura, near Scottsdale, has been closed since March 16 because of the coronavirus pandemic.

When shows resume, those six years and older will be required to undergo temperature checks and to wear a mask or face covering, according to the website. Employees will also wear masks and gloves.

If someone has a temperature of 100.4 degrees or higher, the entire group they are part of will be asked to reschedule, according to the website.

Medieval Times will also reduce the number of people allowed inside its 1,000-seat arena to half of that and tables will be limited to a max of 10 people.

Guests will also walk on "sanitation floor mats" to clean their shoes.

Once inside the arena, groups will be separated by at least six feet. Disposable silverware and paper straws will be available by request. They will also use one-time paper menus and digital menus.

The Museum of Torture will remain closed. The cast will also not do pre-show meet and greets or post-show autographs for the time being.

According to an online calendar, shows are available every day beginning July 5 with multiple shows on Saturday and Sunday.

However, after the week of July 5, there are no shows currently scheduled on Mondays or Tuesdays.

For more information on their reopening plan and to purchase tickets, visit www.medievaltimes.com.