LIST: What grocery stores, restaurants, and businesses are open and not open around Phoenix? 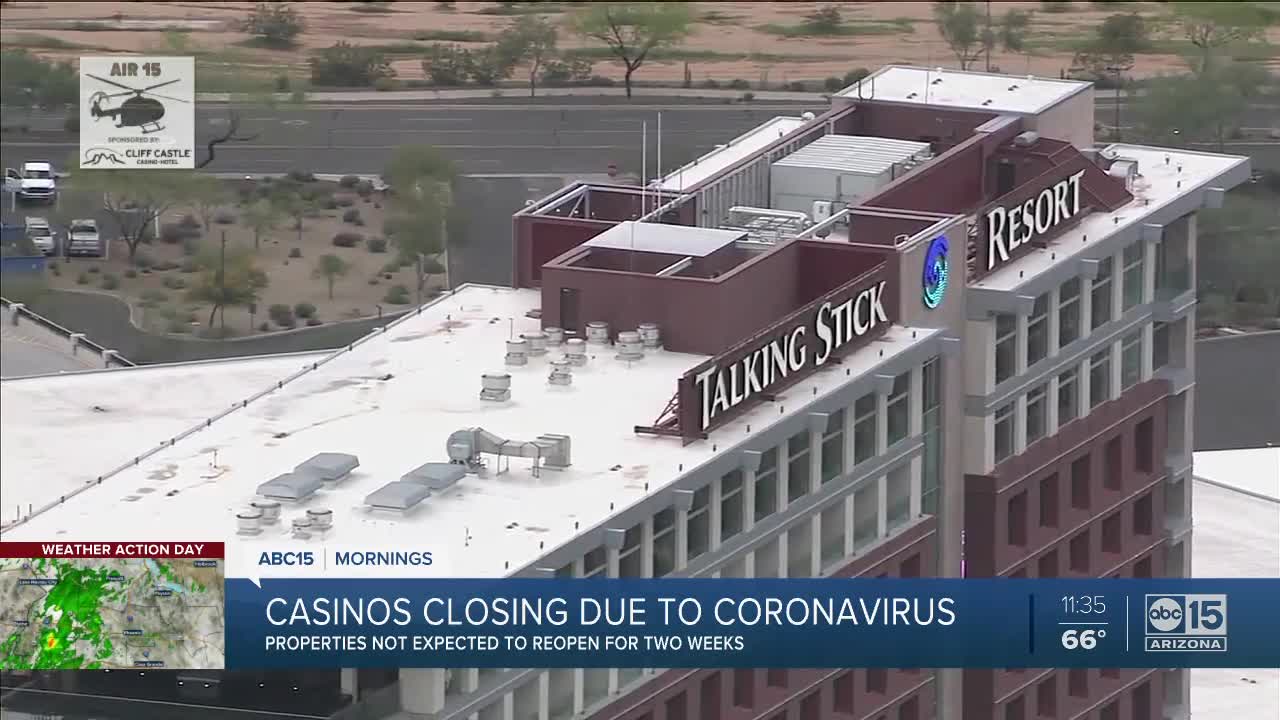 Casinos around the Valley are closing their doors. 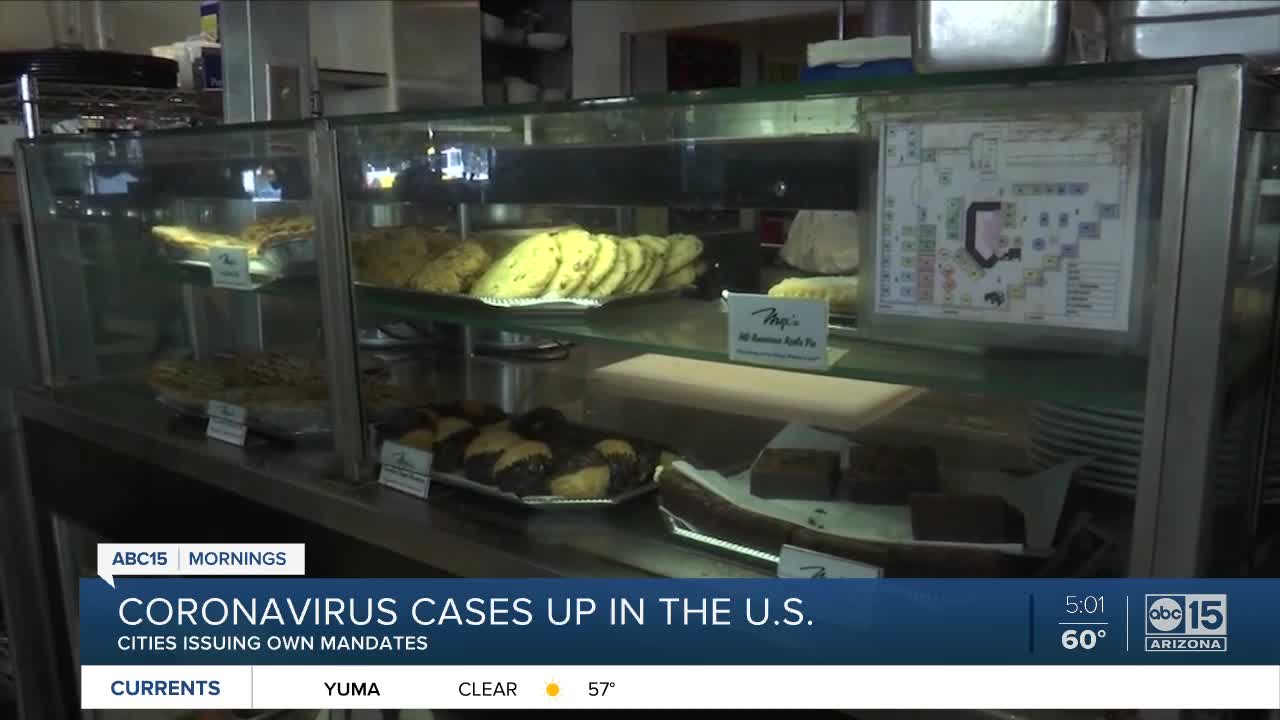 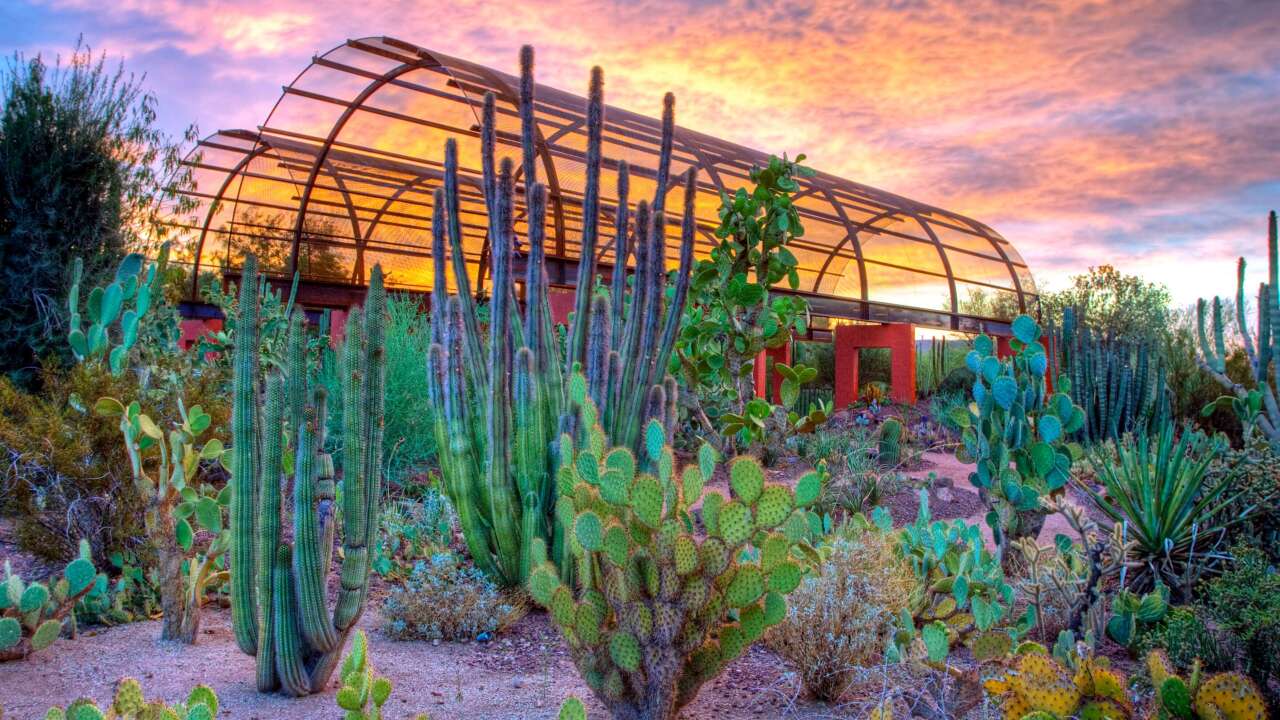 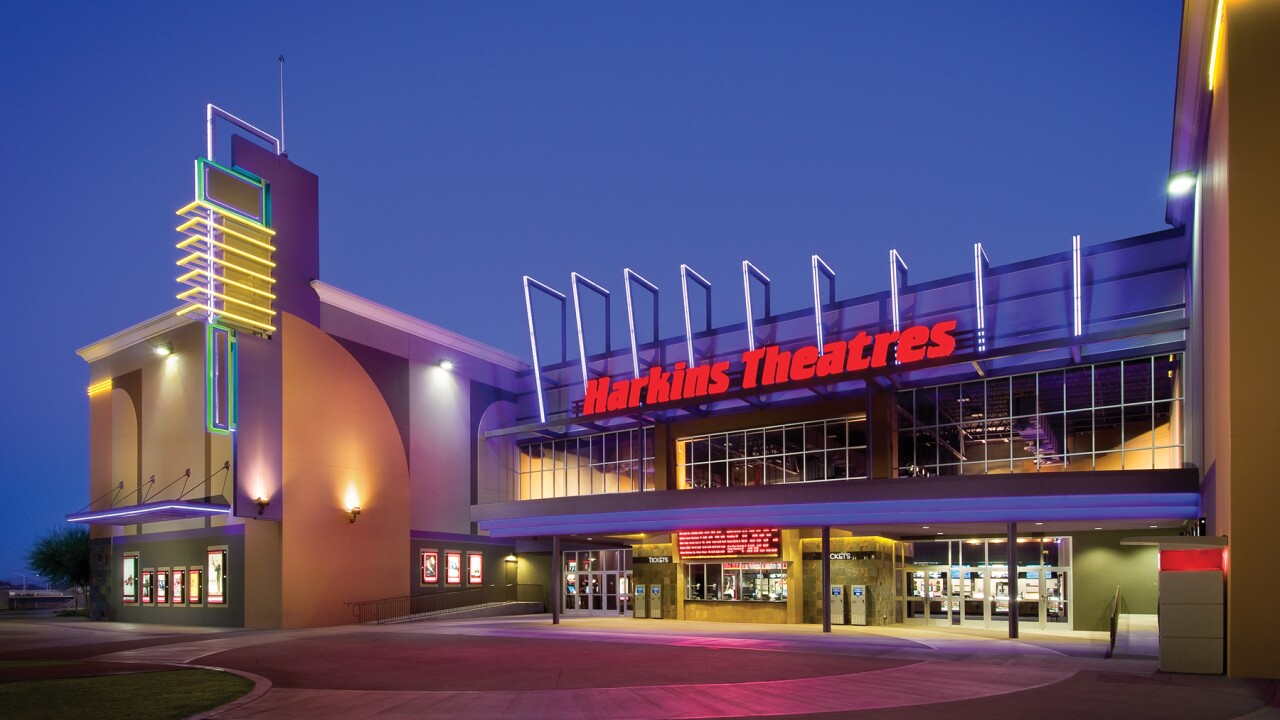 PHOENIX — Editor's note: This article was last updated on Thursday, April 9, 2020. Since this article was first posted, several restaurants, museums, and attractions have closed indefinitely to follow the CDC's social distancing guidelines and to follow Arizona Gov. Doug Ducey's stay-at-home executive orders, all efforts to help prevent the spread of COVID-19. Restaurants are allowed to remain open for carry-out, pickup, and delivery orders. View our database of restaurants currently open around the Valley.

A lot has been canceled, postponed, suspended or closed over the last few weeks, especially in recent days. Now, some attractions and restaurants around town have either closed or modified their hours and/or operations, like opening only for takeout, carry-out, or delivery orders.

To help you out, we're compiling our lists and information into one easy-to-read story. We will continue to update our list as information comes into the newsroom. Did we miss one? Send an email to Josh.Frigerio@abc15.com and let him know.

Related: The latest on the COVID-19 pandemic in Arizona - How many cases? What our health officials saying and recommending
Related: LIST: Daycare, learning, food resources for Arizona families amid school closures

All the major grocery stores in the Phoenix metro are open. Some have slightly shortened their hours to allow staff more time to restock the shelves and clean the store because of the recent spike in demand related to concerns surrounding COVID-19.

Search the database below for a regularly updated list of open restaurants across the Valley.

Linger Longer Lounge: Late Sunday night, March 15, the Phoenix bar announced in a Facebook post that it would be closed for the remainder of the week "or until we fill it is safe to open to the public again." "We want to do what is best for our community and while we are saddened to close our doors for any period of time we have everyone’s safety in mind. Be careful out there and we will see you again soon. Please wash your hands.

Illegal Pete's: Beginning on Monday, March 16, all restaurants will be closed for a "minimum" of four weeks. Ilegal Pete's has two restaurants in Arizona: Mill Avenue in Tempe and another in Tucson. "With the spread of COVID-19, we want to do what’s right to protect our crew, customers, and community. All research points to social distancing as being the key to controlling the spread of the virus, and we will be taking this advice as gospel," the restaurant wrote on its website.

Barrio Cafe and Barrio Cafe Gran Reserva: Chef Silvana Salcido Esparza announced on Instagram on Monday that both of her restaurants were closed and would remain closed until further notice.

Evening Entertainment Group: The company behind several bars, restaurants and nightclubs in the Valley has decided to temporarily close all of its concepts. Their concepts include: Bottled Blonde, Sandbar Mexican Grill, Hi-Fi Kitchen, Casa Amigos, Chauncey Social, Skylanes, Bevvy, RnR Gastropub, Stock and Stable, Honor Amongst Thieves, and The Mint.

Hash Kitchen: All restaurants are closed and are not doing to-go orders.

Tomaso's Italian Kitchen: The restaurant is closed and is not going to-go, pickup, or mobile orders.

Durant's: The famous Phoenix steakhouse said in an email to guests that it will remain closed "until the situation changes."

Cobra Arcade: In a Facebook post, Cobra Arcade said it has closed both of its locations in Phoenix and Tucson. “For the foreseeable future, we are closing our doors. Not to keep people from having fun or to keep our employees from making a living…but to make sure we are doing our part to keep all of us healthy and safe for the future," a note said.

Little Miss BBQ: In a heartfelt statement on its Facebook page late Tuesday, Little Migg BBQ wrote that it would temporarily close its restaurants after business on Wednesday, March 18. "Doing takeout as a restaurant not made for takeout or with an incredible labor intensive menu doesn't work. I know it sounds great for politicians to think takeout is the saving grace, but the numbers don't lie. Unless you are built for that, it's hard to make work," the statement said.

Cien Agaves Taco & Tequila: In a statement on its Facebook page, Cien Agaves said it would close its restaurants. "We hope to be back within a couple weeks," the statement said.

OBON Sushi: All restaurants are closed.

Pat's Run: Pat’s Run 2020 is going virtual. On April 18, instead of gathering together in Tempe, we encourage you to run 4.2 miles individually, wherever you are. Let’s show our strength in a challenging time and also support Tillman Scholars. The mission will go on.

Chandler Chamber Ostrich Festival: After insisting that the event would go on as planned, organizers with the Chandler Ostrich Festival reversed course minutes before the festival was scheduled to begin. The festival has been postponed and will be rescheduled, organizers said in a news release. "This was not an easy decision and certainly not one we took lightly,” said Terri Kimble, President and CEO of the Chandler Chamber of Commerce. "The Chamber and our partner, SLE have taken extraordinary efforts to ensure the safety of the public, however in wake of the President's Declaration of National Emergency, and the state’s Declaration of Public Health Emergency we feel it is in the best interests of our attendees, staff, vendors and all people involved that the festival is postponed. We urge everyone to follow the guidelines and protocols put forth by public health officials and the CDC.”

Luke Days: Luke Air Force Base announced Friday that "Luke Days 2020 Airshow scheduled for March 21-22, 2020 is canceled due to growing COVID-19 concerns and to mitigate health risks to attendees."

Phoenix Pride Parade and Festival: Organizers behind Phoenix Pride announced Friday that they have canceled their April events and will reschedule them for sometime in the fall.

Scottsdale Arts Fest: On Thursday afternoon, organizers announced that the Scottsdale Arts Fest had been canceled. Earlier in the week, organizers were hopeful that the festival would go on as previously scheduled. "Unprecedented cancellations across the nation in the areas of sports, culture, entertainment, and education have filled our newsfeeds in the last 24 hours. At this time, we feel compelled to act decisively and out of an abundance of caution to do our part in quelling this pandemic before it is allowed to take hold in our communities," a statement said.

Cirque Du Soliel's Axel: Cirque Du Soleil's upcoming performances of "Axel" in Arizona have been canceled, the show announced in a news release. The show was scheduled to be at the Findlay Toyota Center in Prescott Valley, Arizona on March 19-21 and at Tucson Arena in April 17-19, 2020. Tickets purchased through Ticketmaster would be automatically funded. "The touring division of Cirque du Soleil will be working to reschedule these dates in the upcoming weeks," the statement said.

Nirvana Food and Wine Festival: Organizers announced Thursday that the Nirvana Food and Wine Festival would be postponed. It was initially scheduled for April 16-19, 2020 at the Sanctuary Camelback Mountain Resort & Spa in Paradise Valley. In a statement, the festival said: "Ultimately, there is nothing more important to the Nirvana Food & Wine team than ensuring the health and safety of all who attend, and we trust that you will agree with our decision to delay. We are working diligently to find a new date for the event, which we expect to have shortly." All tickets already purchased will be honored at the new date, the statement said.

Gilbert Pizza Festival: The inaugural Gilbert Pizza Fest will be rescheduled, according to David Tyda, the founder of the festival. In a statement posted to the festival,s website, Tyda said: "Your safety and well being is always our top priority. In relation to COVID-19 and festivals/events, we are closely monitoring news updates and recommendations from federal and state public health authorities. We are in the process of rescheduling the festival and will post an update and notify all ticket holders of the new date within 24 hours."

Celine Dion Courage World Tour: Celine Dion postponed the remainder of her North American tour on Thursday, which included a scheduled March 29 stop at Gila River Arena in Glendale. According to a statement sent out via her Twitter account, her tour would be rescheduled. A new date for the Glendale show was not immediately available.

Rage Against The Machine: Those looking forward to Rage Against The Machine's upcoming reunion will have to wait a bit longer. Late Thursday, the band posted a message on its Instagram page that it was postponing its tour due to concerns surrounding COVID-19: "Due to the current outbreak and ban on public gatherings, we are postponing the first part of our tour (March 26-May 20)." The band's tour was scheduled to perform at Gila River Arena on March 30 & April 1. Rescheduled dates have not been released yet.

Pride Run Phoenix: The Pride Run was supposed to happen on Saturday, March 20. However, on their website, they said: "Our top priority is taking the correct actions to protect everyone’s well-being and safety. For this reason, with the rapid spread and uncertainty surrounding the Coronavirus, and careful review of the CDC and World Health Organization (WHO) directives, we have made the difficult decision to cancel the 2020 pride run and walk."

Arizona Game Fair: "After some long conversations with our friends, family, staff, and the gaming community, we have made the decision to postpone this year’s Arizona Game Fair until later in the year" the group posted on its website. "We are working with the Mesa Convention Center to identify a future date for the event. We will contact all attendees and exhibitors with options once we work out the details."

The City of Buckeye has postponed a handful of events related to COVID-19, including the Ultra Man 50K, Buckeye Melodrama, Verrado's Founders Day, and all youth sports leagues. The March 13 concert in the park and stargazing event at Skyline park have been canceled.

Anthem Days: In a statement on its website, Anthem City Council said, "With the uncertainty surrounding the COVID-19 pandemic, we have made the responsible decision to cancel Anthem Days (and carnival)." The two-day event was scheduled to take place March 28-29.

Arab American Festival: The Arab American Festival has been postponed due to concerns surrounding COVID-19, according to a statement on its website. "Out of an abundance of caution and to protect the citizens from coronavirus, we have decided to postpone the festival! Rescheduled date will be announced soon," the statement said.

My Nana's Best Tasting Salsa Challenge: Salsa lovers will have to wait a bit longer. In a tweet on Saturday, officials said the festival, which was scheduled for April 18, would be postponed.

FuelFest: Organizers announced that FuelFest has been rescheduled for Saturday, Sept. 19, 2020. It will take place at Wild Horse Pass Motorsports Park.