LIVE RADAR: Pop-up storms around the Valley
EntertainmentThings To Do

MAP: Holiday light displays you have to see around the Valley

When it comes to winter in Phoenix, we may not have to shovel snow, but we still enjoy the tradition of driving around looking at incredible light displays.

Valley cities, businesses, and resorts go all out with their decorations, sporting thousands (even millions) of lights, nightly snowfalls, ice skating rinks and holiday songs. We gathered some of the top displays to check out if you haven't before.

Do you have a spectacular at-home light display you want to share with everyone? Send an email to Josh.Frigerio@abc15.com with a photo of your display and address so we can add it to our map! 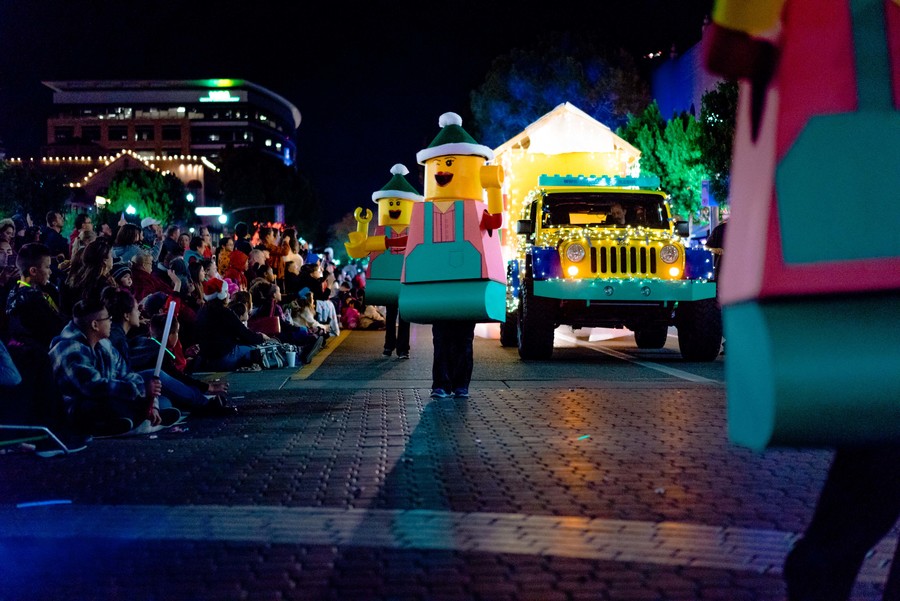 Head to downtown Tempe's Mill Avenue to watch dozens of trucks, vehicles, and floats outfitted with hundreds of lights make their way down the street. The city's official holiday tree at Centerpoint Plaza (near Pedal Haus Brewery) will be turned on for the season. Santa will also make a visit.

The parade starts at 6 p.m. There are metered parking spots and parking structures nearby. It is recommended to get there early to park and find a spot along the street. Event details. 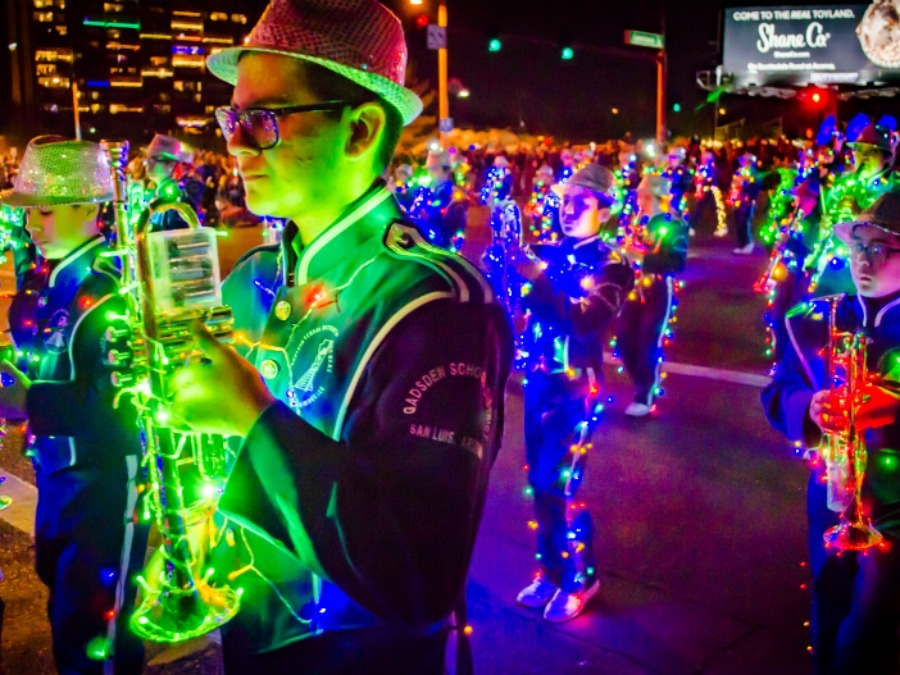 Get into the holiday spirit with the 31st annual APS Electric Light Parade. More than 100,000 people are expected to line the streets of central Phoenix on Dec. 2 to watch dozens of marching bands, trucks and floats glowing with lights make their way down the street.

The parade starts at 7 p.m. near 7th Street and Indian School Road. ABC15's Danielle Lerner and Nick Ciletti will be down there to host the parade. Be sure to get there early enough to park and find a good spot along the parade route. Event details.

Fifty boats illuminated in lights will float around Tempe Town Lake for the annual Fantasy of Lights Boat Parade. It's a Tempe tradition that started in 1999. It's also the only time that motorized boats are allowed on the lake. The event starts at 4 p.m. and the parade will start once it gets dark.

Local bands will provide festive music and concessions will be sold near the waterfront. The event will end with a fireworks show over the lake. Event details.

"Illumination: Symphony of Light" is a new light show in the Valley. It has 1.5 million lights and was designed as a drive-through experience. Vehicles drive under semi-sized tunnels covered in lights while lighted figurines flicker to holiday tunes from the radio.

The Lights of the World Lantern Festival is back this year and at a new location. It is now at the Arizona State Fairgrounds near 19th Avenue and McDowell Road. The festival is made up of 11 exhibits and 75 displays including the Eiffel Tower, London Bridge, a Chinese Temple and a dragon made of 100,000 China plates. This year the display added a 3-D projection show. It also has carnival rides and an acrobat show (additional cost).

The festival runs nightly from 5 p.m. to 10 p.m. (closed Christmas Day.). Admission is $15 to $18 per person. Parking at the Fairgrounds is $10 per vehicle. The acrobat show is an additional $8 per person. Event details.

More than a million lights adorn light displays of butterflies, monkeys, ants and a lion around the Phoenix Zoo for its annual ZooLights display. This year, the zoo also added 3-D displays. It will show "Rudolph the Red-Nosed Reindeer" in its 4-D theater and have its annual "Music in Motion" light show around the lake. Also new this year is the "Dinosaurs in the Desert" exhibit which has than 20 animatronic and roaring dinosaurs.

RELATED: ZooLights: Everything to know before you go Christmas at the Princess

The Fairmont Scottsdale Princess Resort is putting on its mega Christmas festival this year. It has more than 4.5 million lights around its lagoons, an ice rink, a four-lane ice slide, and a winter-themed Ferris Wheel. A five-minute show is projected nightly onto the resort's facade and a four-story Christmas tree twinkles with 70,000 lights. There is an area to roast marshmallows and make s'mores.

Admission is $55 to $85 per vehicle and includes six wristbands. The wristbands include many of the activities listed above. Ice skating, photos with Santa and Build-A-Bear pop-up workshop are additional costs. Event details.

The Old West-themed attraction in Chandler is decked out for the holidays. The town has been covered in lights, including a 100-foot tree. Throughout November and December weekends, Rawhide will have visits from Santa Claus, a tree-lighting ceremony and snow flurries.

There is no cost to walk through the town and to park. On nights of a special event, there may be a $5 parking fee, we're told. You'll want to call the venue before visiting to confirm. Event details. 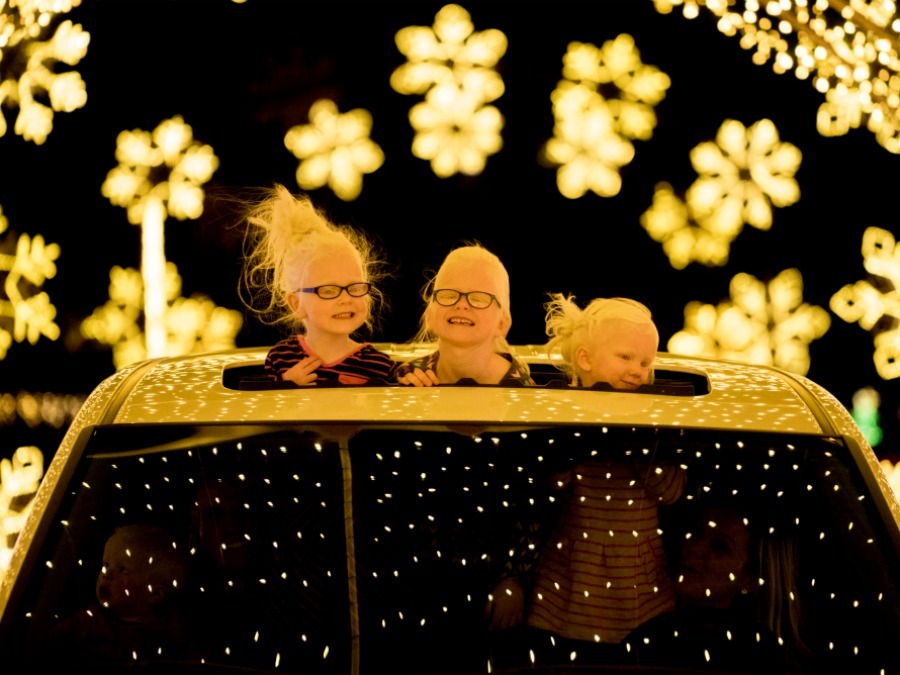 "Christmas in Color" is another new drive-through light display for the Valley. The Utah-based light show has 1.5 million lights and has set up its show at Goodyear Ballpark. All of its lights are synchronized to music that plays on the car radio.

More than 1.6 million LED lights illuminate downtown Glendale and Murphy Park. This year multi-colored lights will be at Murphy Park while the rest of downtown is covered in white lights. Glendale Glitters' kick-off weekend will be Nov. 24 and 25. The lights will be officially turned on Nov. 24 at 5:30 p.m. That weekend there will be snow, photos with Santa, and a petting zoo.

After that, the lights will be turned on nightly from 5 p.m. to 11 p.m. On some weekends there may be live music in the Amphitheatre. The lights and festival are free. Event details. Every year, The Church of Jesus Christ of Latter Day Saints decorates the grounds of its Mesa temple with hundreds of thousands of twinkling lights. The display is free and open to the everyone. As you walk around the grounds, Christmas music plays. There is a nativity scene and statues of Mary and Joseph.

Scottsdale's McCormick-Stillman Railroad Park will have five weeks of holiday lights and train rides this year. Train rides through the light show are $5 per person. The carousel will also be running.

Do you go all out with holiday lights? We want to see it! Please fill out the form below.