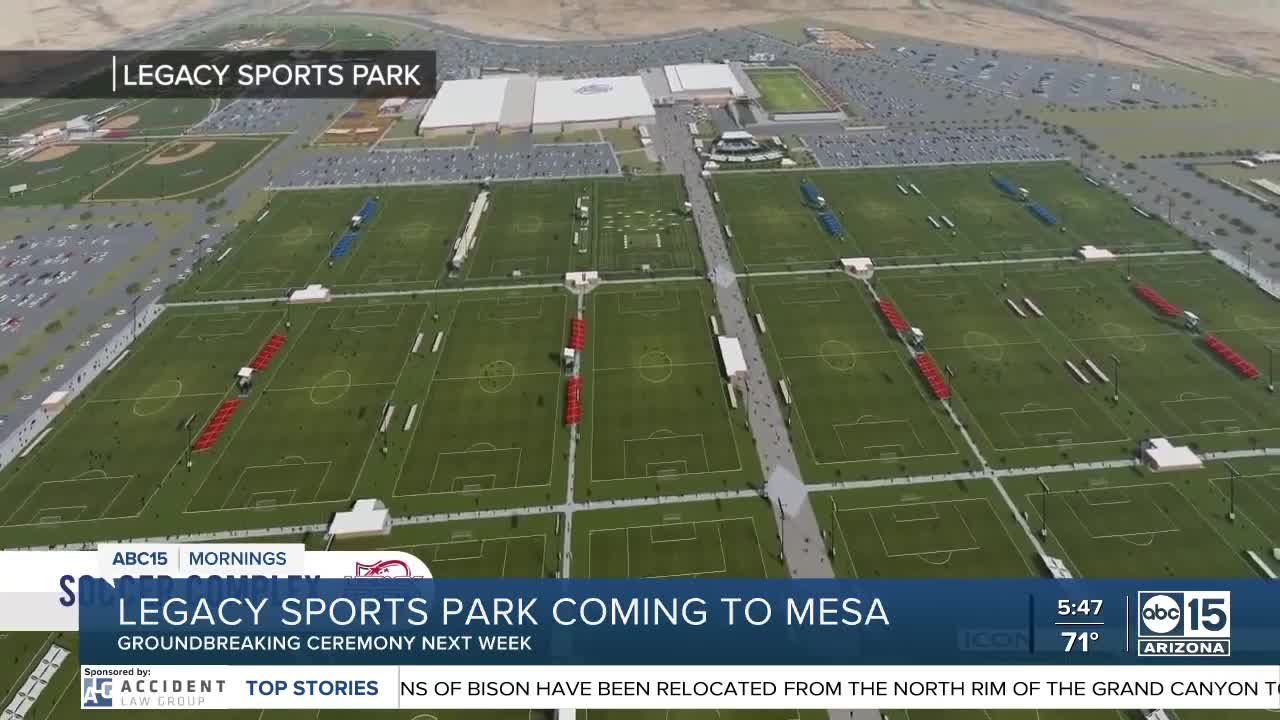 Officials are set to begin construction on Legacy Sports Park, a 320-acre sports and entertainment complex in Mesa. It will have soccer fields, volleyball courts, sand soccer courts, an outdoor stadium, amphitheater, e-sports arena, and a gymnastics venue. It is expected to open in early 2022. 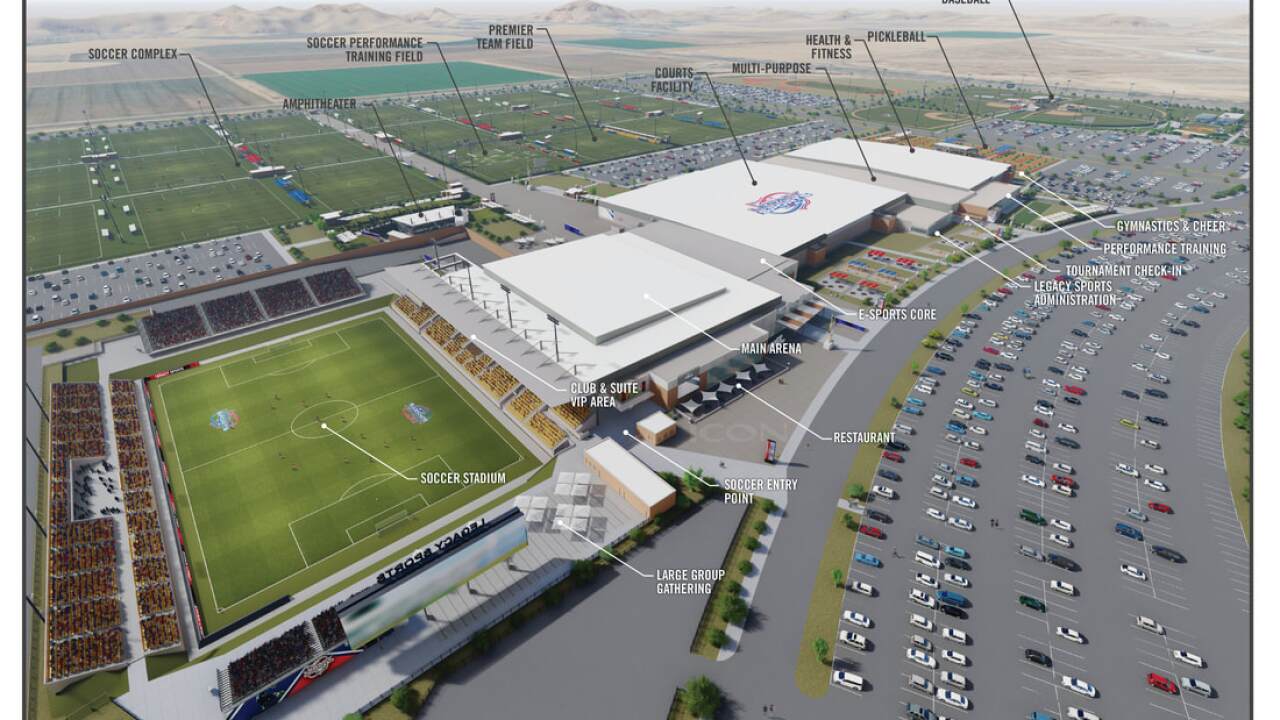 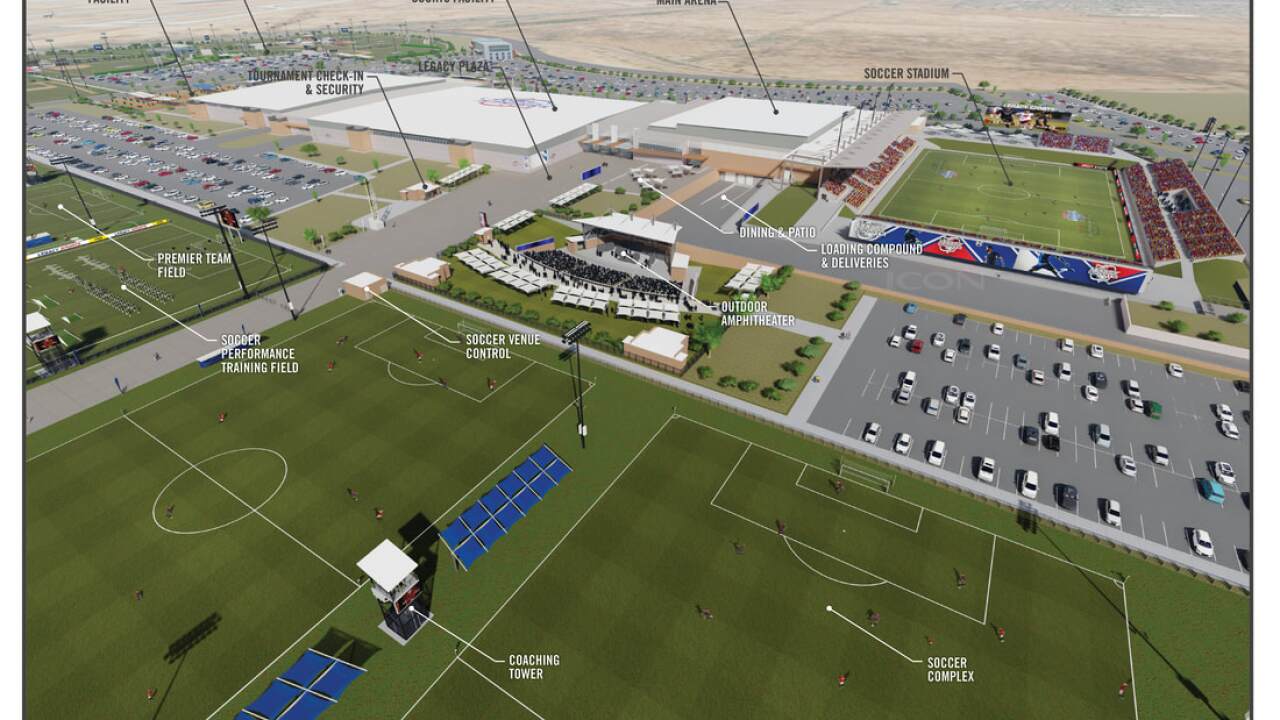 MESA, AZ — A massive sports and entertainment complex with soccer fields, volleyball courts, baseball and softball fields, an outdoor stadium, an e-sports arena, and a fitness center will soon begin development in Mesa.

Project are expected to hold a groundbreaking ceremony on Friday, Sept. 18 to mark the beginning of construction of Legacy Sports Park, a $250 million, 320-acre privately owned sports and entertainment facility that will be built near Ellsworth and Pecos roads, just east of Phoenix-Mesa Gateway Airport, part of the old General Motors Proving Grounds.

When completed, the park will boast:

"This is something that's long overdue for the Western United States. For so long, we've had to have our travel clubs and teams and tournaments have to go out of state because we just don't have the necessary venues to host those types of events in the state of Arizona," said Chad Miller, CEO and president of Arizona-based Legacy Sports USA, in a Zoom interview with ABC15. "So to be able to provide a home to these organizations and these types of clubs and events and say, now you can stay here in the state, now tourism can come here, now everybody can leave their states and come to Arizona and participate in these type of events, it's an exciting time to be able to bring this to the Valley."

Miller said the project is fully funded and would be completed in a single phase. Some initial facilities could open as early as late 2021, based on current timelines, but the entire complex is projected to be completed and open in January or February 2022.

Even though the opening is still years away, Miller said additional expansions could include a hockey arena and an on-site hotel.

"This is anything and everything a sports or entertainment fan could want," he said.

Miller said the project's designs and permits would be submitted to the City of Mesa within the next month, and that clearing out the land and grading it would begin soon.

Legacy Sports has partnered with Dan O’Brien, who won a gold medal at the 1996 Olympics, to oversee the park's fitness facilities and Oak View Group, a Los Angeles, California-based sports and entertainment company, to oversee and manage the complex, as well as to secure additional funding and naming rights to the complex, a news release said.