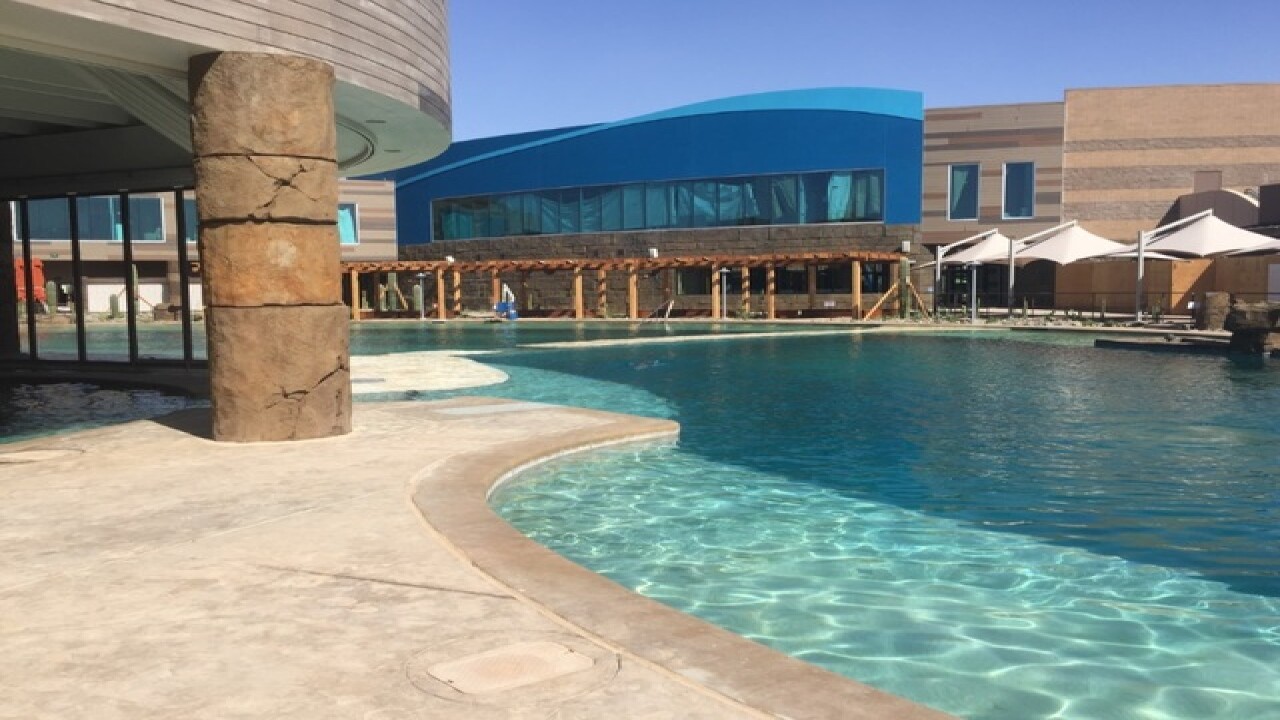 Dolphinaris Arizona , a new entertainment attraction that will let people interact with dolphins, has officially opened its doors and pools.

Many people have questions about the facility, especially the care of the dolphins.

Its debut in Arizona has been controversial to say the least. Activists have expressed deep concern over the animals' care and their treatment as "human entertainment."

ABC15 was recently given a behind-the-scenes tour, where we spoke with General Manager Dr. Grey Stafford, on-staff veterinarian Dr. Molly Martony, and the animal trainers. We also got to meet each of the Atlantic bottlenose dolphins that now call Dolphinaris home .

HOW MANY DOLPHINS WILL BE LIVING AT DOLPHINARIS?

During our behind-the-scenes tour, there were five dolphins at Dolphinaris Arizona. There were 3 females – Ping, Alia and Khloe – and two males -- Bodie and Sonny.

Stafford said the facility will likely have between eight and 12 dolphins total.

GET TO KNOW THE DOLPHINS:

These are the details regarding the five dolphins we met during our tour. Information for the additional three dolphins was not available. WHERE DID THE DOLPHINS COME FROM?

All of the dolphins were born and raised in U.S. licensed facilities in human care, said Stafford. He did not specify which facilities housed the animals.

Martony said each of the five dolphins lived together at their previous facility. “You could basically consider them as one pod – they get along very well,” she said.

WHAT CAN YOU DO AT DOLPHINARIS ARIZONA?

People will be able to reserve and purchase one of four different dolphin experiences, each with a different level of interaction with the dolphins.

There will also be wading pools where people will be able to hangout in lawn chairs and watch the dolphins after their interaction is over. This is available to the “deluxe” and “trainer” package participants.

Modern Grove Eatery , which currently has locations in Phoenix and Mesa, is opening a third location at Odysea in the Desert, the 35-acre food-and-retail concept off the Loop 101 and via de Venture. It will also be the official food vendor for Dolphinaris.

Modern Grove will have two concepts at Dolphinaris Arizona. Modern Grove Views will be located on the second floor of the facility and have panoramic views of the dolphins in their lagoons. The restaurant will be open and available to the public, not just Dolphinaris patrons.

The Docktails Beach Cafe will be located within Dolphinaris near the wading pools.

Both concepts are still under construction and are expected to open by November 1, according to a spokesperson.

HOW BIG IS THE DOLPHINS’ HABITATS?

Dolphinaris Arizona is made up of indoor and outdoor pools that total 900,000 gallons of water. The pools are 10 feet at their deepest point and about 3 ½ feet at their most shallow, said Martony.

Here are the USDA’s full regulations on swim-with-the-dolphins programs . [Correction: In Feb. 2016, the USDA indicated that it was looking to update its regulations regarding marine mammal care and swim-with-the-dolphin programs. It sent out a proposal and requested public comment. A spokesperson said over 5,000 comments were received and the agency is reviewing them. As a result, the specific swim-with-the-dolphin regulations listed in a previous version of this article were currently not enforced, however, facilities are required to follow the regulations under Subpart E (page 110).]

“What I wish they [the activists] knew was that the federal government sets the standards – the minimum standards of care – for all zoo animals on public display, particularly cetaceans like bottlenose dolphins, so we have to not only abide by them, but as a company, we want to excel and exceed those [standards],” said Stafford.

WHAT DO WE KNOW ABOUT THE DOLPHINS’ CARE AND SAFETY?

Dr. Molly Martony is the full-time staff veterinarian at Dolphinaris Arizona . Next to the indoor habitat is her office, which has various medications and testing equipment to monitor the dolphins' care. A lot of the same equipment found in human doctor’s offices.

She has a portable ultrasound machine, an electrocardiogram (or EKG), bronchoscopes and endoscopes.

Martony said the dolphins receive regular check-ups and can also participate in their own healthcare, volunteering blood and gastric samples.

She is passionate about dolphins and their care.

"The first time I went to SeaWorld California as a young child, I interacted with a dolphin and fell in love and knew that I wanted to work with these amazing animals," she said.

In terms of training, Stafford and Martony reinforced that the dolphins lead the interactions and trainers only use positive reinforcement.

“Everything we do is based on positive reinforcement. If an animal says 'I want to come and meet you today,' great, we reinforce that. We provide toys, enrichment and fun, and variety. If an animals says ya know, 'I’d rather go swim with my buddy over there,' that’s OK, too,” said Stafford. “It doesn’t impact us in terms of the guests that we see. It doesn’t impact in terms of what the animal will eat for that day. They’re going to get their diet no matter what.” WHAT HAPPENS TO THE WATER WHEN THERE IS A STORM OR A DUST CLOUD?

Arizona is prone to dust storms, or haboobs, during the monsoon, and during that season, dust and debris get blown into the air, across our driveways and into the pool.

Dolphinaris has multiple open-air pools, as well as an indoor pool. Dr. Martony told us that when weather moves in, the dolphins will be brought to the indoor pool which can be completely protected by plexiglass.

Dr. Stafford told us that all 900,000 gallons at Dolphinaris are filtered roughly 16 times a day.

“Anyone who has experience with a salt water aquarium understands what we do here on a much larger scale. We have drum filters to take out particulates and kind of the larger macro-particles you might expect from an aquarium,” he said. “We have a variety of mechanisms, not just one method. We also have divers that dive to clean up algae and so forth.”

The dolphins' pools are heated in the cooler months and chilled during the summer months so they stay between 75 and 80 degrees year-round.

Dolphinaris Arizona is owned by Ventura Entertainment, a Mexican-based company, which operates five facilities in Mexico. This is the company’s first facility in the United States.

HOW DOES THE SALT RIVER PIMA-MARICOPA INDIAN COMMUNITY FEEL ABOUT DOLPHINARIS?

We reached out to the Salt River Pima-Maricopa Indian Community, but they declined to speak to us for this story.

“We have no comment at this time,” spokesperson Blessing McAnlis-Vasquez said in an email to ABC15.

Yes. Dolphinaris Arizona is properly licensed with the United States Department of Agriculture, according to a spokesperson.

The facility received a pre-license inspection on July 6, 2016 and passed the inspection  with zero concerns.

Dolphinaris is also a member of the Mexican Association of Habitats for Interaction and Protection of Marine Mammals and the European Association for Aquatic Mammals.

HOW IS DOLPHINARIS HELPING WITH CONSERVATION?

"Absolutely No Dolphins in the Arizona Desert" is a Facebook page run by animal activists against Dolphinaris Arizona. According to their online postings, one issue they have is that the dolphins will be used to perform tricks for human entertainment.

On its website , Dolphinaris says its mission is to "amaze, educate and empower" its guests. "We want to inspire a new generation of people who know and respect dolphins and our oceans and who want to become stewards of the sea and its life."

Dr. Stafford and Dr. Martony echoed that sentiment during our interviews.

"We want to educate people. We want to inspire them. We want to motivate them," said Stafford. "I want to teach young people to stop throwing plastic  in the ocean, to stop over-fishing certain populations of fish so all animals can enjoy a good healthy food chain and ecosystem. The decisions we make now will impact this planet for decades."

Martony spoke to us about smaller conversation efforts like eliminating the use of plastic straws.

The company is also part of the Dolphinaris Foundation .