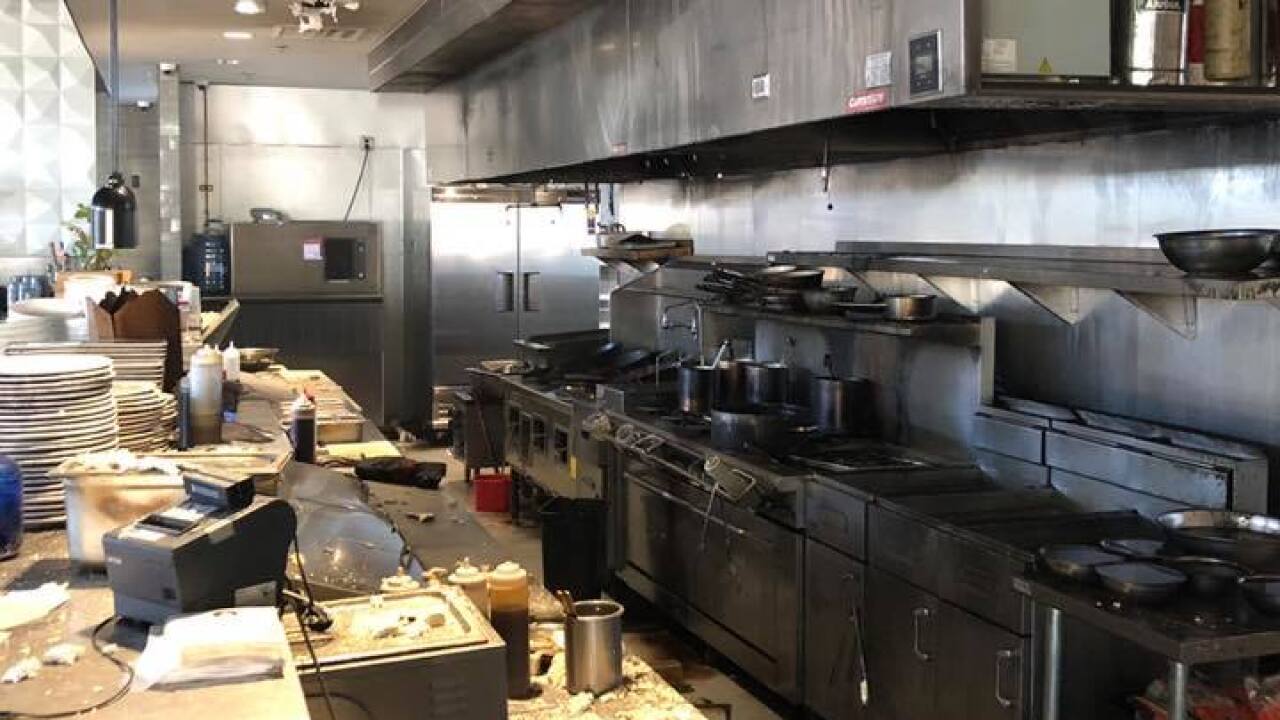 GILBERT, AZ — Clever Koi has been forced to close its restaurant-- hopefully just temporarily -- in downtown Gilbert after a kitchen fire on Wednesday.

"We’re very sad to report our Gilbert location suffered a severe fire this afternoon, but by the grace of God, no one was injured," the restaurant said in a post on its Facebook page Wednesday evening. "We will keep you all posted on the next steps."

The post included a photo of the kitchen which showed a large hole in the ceiling, debris on the ground, and what appeared to be black burn marks on much of the cooking equipment.

Late Thursday, owners Nick Campisano and Joshua James, said in a statement that the fire started while its staff was prepping dinner, but that everyone was able to make it out of the restaurant safely.

"However, the kitchen was severely damaged and there was also extensive smoke and water damage in the dining room," the statement said.

"We are still in the process of accessing the damage, but rest assured that reopening Clever Koi in Gilbert is our top priority. We look forward serving you again soon. Until then, please visit our awesome staff at Clever Koi and Across the Pond in Phoenix, and Fellow Osteria in Scottsdale."

Reached via direct message on Twitter, Mark Justus, public information officer for the Gilbert Fire Department, said the fire started in the kitchen and spread to the restaurant's ventilation system. He said the restaurant's sprinklers and fire suppression systems helped to contain most of the fire before the crew arrived.

Firefighters were then able to extinguish the rest of the flames, he said.

The cause of the fire is under investigation and no one inside the restaurant was hurt. The restaurant has closed to make repairs, he said.

When news of the fire was posted on social media, chefs and local restaurants shared dozens of messages of support for the restaurant's owners and staff, thankful that no one was hurt, and best wishes moving forward.

"So bummed to hear this. Anything we can do to help, let us know," wrote Arizona Wilderness Brewing Company, which is based in Gilbert. "We'd be happy to buy a beer or two for your crew."

"We are so sorry for this difficulty! Reach out to us if you need anything," wrote Saddle Mountain Brewing Co, a brewery based in Goodyear.

Grubstak, which until a few months ago was practically neighbors with Clever Koi, said, "So sorry to hear. Wishing you guys the best thoughts for a quick recovery."

Clever Koi has two locations in the Valley. The first opened in 2013 in Phoenix near Central and Glenrosa avenue, across from Steele Indian School Park. The Gilbert location opened in 2016.

Campisano and James also are the team behind Across The Pond, an Asian-inspired cocktail and sushi bar next door to Clever Koi's Phoenix restaurant. In December, they opened Fellow, an Italian restaurant, near Arizona State University's SkySong complex in Scottsdale.

Editor's note: This story has been updated to include a statement from Nick Campisano and Joshua James, the owners of Clever Koi.