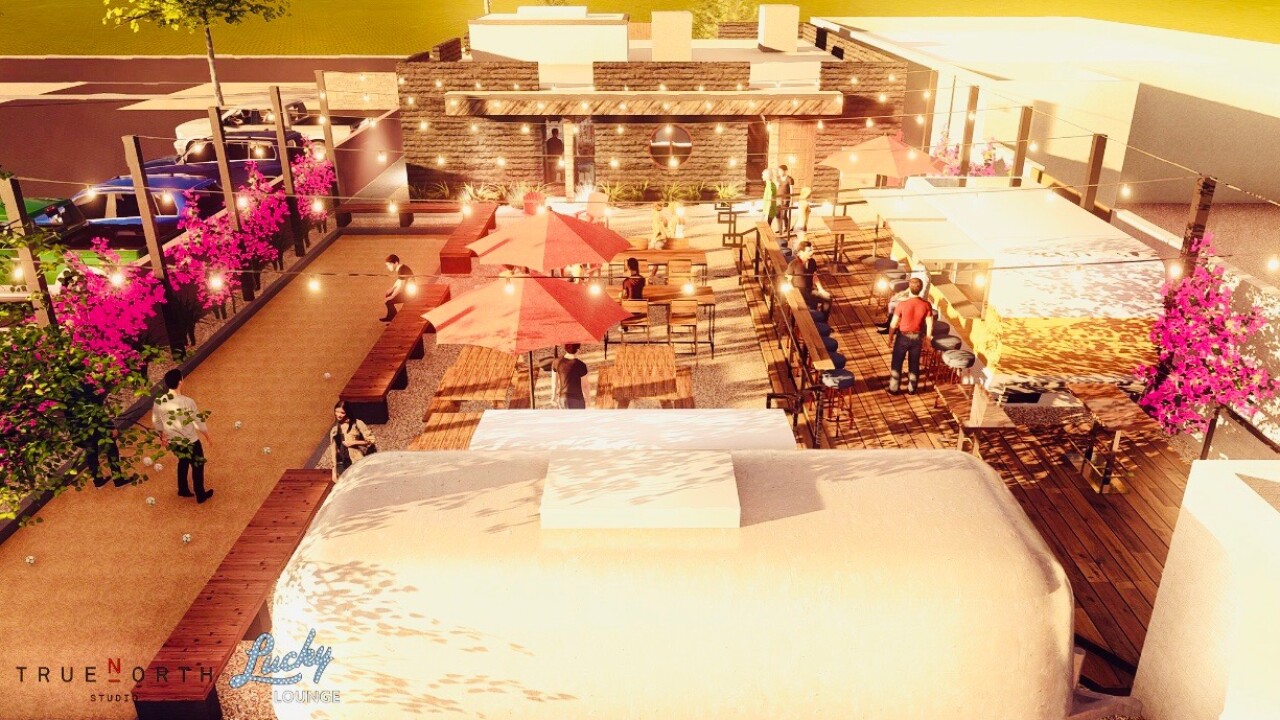 PHOENIX — The area around Roosevelt Row in downtown Phoenix has welcomed a host of new restaurants, bars, and breweries for people to eat, drink, and hang out in recent months and years.

Greenwood Brewing.
Arizona Wilderness Brewing.
Taco Chelo.
Trapp Haus BBQ.
Josephine.
Poppy.
Sazerac.
Plus, a handful of other businesses down the street at The Churchill.

More places are on the way.

Despite the constraints that COVID-19 has put on the hospitality industry, many new projects have remained in the works in the Phoenix area and development is moving forward.

Restaurateur Julian Wright, the CEO of Fork and Dagger Hospitality, who has opened a number of concepts in downtown Tempe, including Pedal Haus Brewery and Ted's Refreshments, will eventually add a handful of concepts -- a mix of restaurants, bars, and lounges -- to his portfolio in downtown Phoenix.

Nearby, the owners behind The Whining Pig will open an upscale cocktail bar and restaurant in the basement of the Ten-O-One building, which is located on the corner of Roosevelt Street and Central Avenue.

And David Tyda, the producer of several food festivals in town, has partnered with Ryan Oberholtzer, who owns Provecho - Comida de mi Tierra, to open a mezcal and tequila bar in Phoenix.

Here is what we know about each project.

As we first reported back in December, Wright is opening a satellite location of Pedal Haus on the north end of the MonOrchid building, which sits along Roosevelt Street.

It will mark Pedal Haus' third location in the Valley. In addition to the main brewery in Tempe, Wright opened a second location in downtown Chandler in February where his previous concept, Las Palmas Cantina, used to be.

The downtown Phoenix location will be 9,000 square feet, which includes a 3,000-square-foot outdoor patio, he said. It will feature Pedal Haus' signature silo, as well as some new elements. One of those would be the hostess stand, which will have tap handles where people can sample some of Pedal Haus' beers while they wait for a table.

Wright said site plans for the location have been submitted to the city, but construction has not yet begun. He anticipates opening in March 2021.

Wright described Lucky's as a neighborhood bar with a "retro, hip vibe," subtly comparing it to some of the independent bars found in Portland, Oregon. It will be located near Second and Garfield streets in a building between Sazerac and FilmBar, not far from where Punch Bowl Social is reportedly under construction.

It will have a vintage feel, pool tables, a ski ball machine and TVs. "Just kind of that classic neighborhood bar feel with a little bit of hip, vintage layer to it," he said.

Lucky's will also have a back outdoor area with picnic tables, fire pits, an area for live music, and a bocce ball court, he said.

People will order drinks from a 1970s camper that has a wrap-around deck attached to it. Food will be served from an Airstream trailer.

Depending on the COVID-19 environment and what restrictions, if any, will remain in place for bars, Wright said he could potentially open anytime after October 1.

Sake Haus will replace The Dressing Room, which was located within the MonOrchid building along Roosevelt Row.

Previously owned by Conceptually Social, the owners sold The Dressing Room and their other concept, BeCoffee, to developer True North Studio in 2019 (more on BeCoffee's transformation in the next entry).

Wright said Sake Haus would be a small Japanese bar and restaurant focused on sake, Japanese whiskey, fish, and sushi. He described it as a dark, "cluttered Tokyo alley vibe."

It will also have a sushi bar with six seats, and another bar in the back with 12 seats and seven tables.

"I've always loved sushi and the last couple of years have really gotten into sake," he said.

He said the floor plan has been designed and that they are about to begin the construction plans. His projected opening for Sake Haus is December 2020 or January 2021.

Kahvi Coffee will replace BeCoffee in the MonOrchid building and the gallery space will be redesigned, Wright said.

The coffee shop would have a mix of a European, Scandanavian and Bohemian vibes. It will have different coffee blends, cold brews, and botanical teas, as well as beer and booze. It will also offer grab-and-go items and a small breakfast menu, he said.

He said the entire space, including the gallery, would be gutted and built from the ground up. However, there would still be an area for traveling exhibitions, local artists, and shows.

A smaller version of Kahvi Coffee will also be located in the Ten-O-One Building.

During an interview last week, Wright said he would be taking over the operations of some of True North's bar and restaurant concepts, including Josephine, Coup de Grace, and the Cambria Hotel's Poppy and From The Rooftop Bar. However, in a follow-up interview, he said that is no longer happening.

The team behind The Whining Pig, a neighborhood beer and wine bar with seven locations around the Valley, is opening an upscale, "1920s fancy" cocktail lounge and restaurant in the basement of the Ten-O-One Building, which is located on the corner of Roosevelt Street and Central Avenue.

To get to the bar, people will take an elevator down to the basement, which reportedly used to be a mailroom, said Dan Caprario, who owns The Whining Pig alongside Matt and Katy Fulton.

"As we walked in, as soon as you walk off the elevator, you see these mailboxes, and we just started coming up with these ideas as we walked the grounds…and it all started to fall together," he said.

The name plays a slight homage to Teddy Roosevelt and the Rough Riders, the 1st U.S. Volunteer Calvary that Roosevelt formed in 1898 during the Spanish-American War. Not to mention, there is a massive mosaic of Roosevelt on the side of the building, which also happens to be located along Roosevelt Street.

While there may be some cocktails and menu items named after Mr. Roosevelt or things associated with him, it is not a Roosevelt-themed bar, he said. The focus is on pre- and post-Prohibition-style cocktails, whiskeys, bourbons, and rums in an early 1900s setting.

Different from The Whining Pig, Rough Rider will have a full kitchen and raw bar, which will allow them to offer more substantial dishes, in addition to shareable dishes like meat and cheese boards.

Those mailboxes will be used as private lockers where guests can store their personal bottles. There will also be a private seating area in an old riser room that might be used for special tastings or events, he said.

Caprario said construction has been underway for a few months now, but due to the uncertainty of what the environment will be with COVID-19 in the future, an opening timeframe is hard to determine right now.

On the west side of Central Avenue and Roosevelt Street -- and still within walking distance of Roosevelt's main stretch -- will be BARCOA Agaveria, a bar and tasting room dedicated to tequila, mezcal, and other agave-distilled spirits.

David Tyda -- the producer behind Phoenix Pizza Festival, Downtown Donut Festival, and FRIED, a music and fry festival -- and Ryan Oberholtzer -- who owns Provecho -- a Mexican restaurant at The Churchill, have partnered to open the new bar.

It will be located within the historic "Hardware Store" building near First Avenue and Roosevelt Street, just south of the KOOL/KMLE radio station and GenuWine, and will share the building with Xico, an organization that promotes Latinx and indigenous artists and artworks, Tyda said.

The bar, which combines the words "bar" and "coa," a tool that farmers use to harvest the agave plant in Mexico, also combines two of Tyda's passions: his love for Mexican culture and downtown Phoenix.

"How can I do two things, sort of deepen my relationship with my love of Mexican culture, and how can I pay great respect to the culture that I've fallen in love with," Tyda said he asked himself after his 2019 split with the Arizona Taco Festival.

He envisions BARCOA as a place where people can hang out and enjoy a drink, while also learning about different tequilas, mezcals, and their flavors. When it comes to food, Tyda plans to invite local food trucks over and to potentially create a delivery system with Provecho, Oberholtzer's restaurant.

Tyda planned to announce the project earlier this year and open during the summer, but COVID-19 slowed the process, he said. The team is still securing permits and has submitted plans to the city, but an opening date depends on when those permits and plans get approved.

Construction could start within 30 days of those approvals, he said.

Tyda said there is a basement in the building where he hopes to expand to host special tequila tastings and classes, but with COVID-19 and social distancing concerns, that part of the project has been put on hold.