Aldi opens two stores in the Valley on Thursday 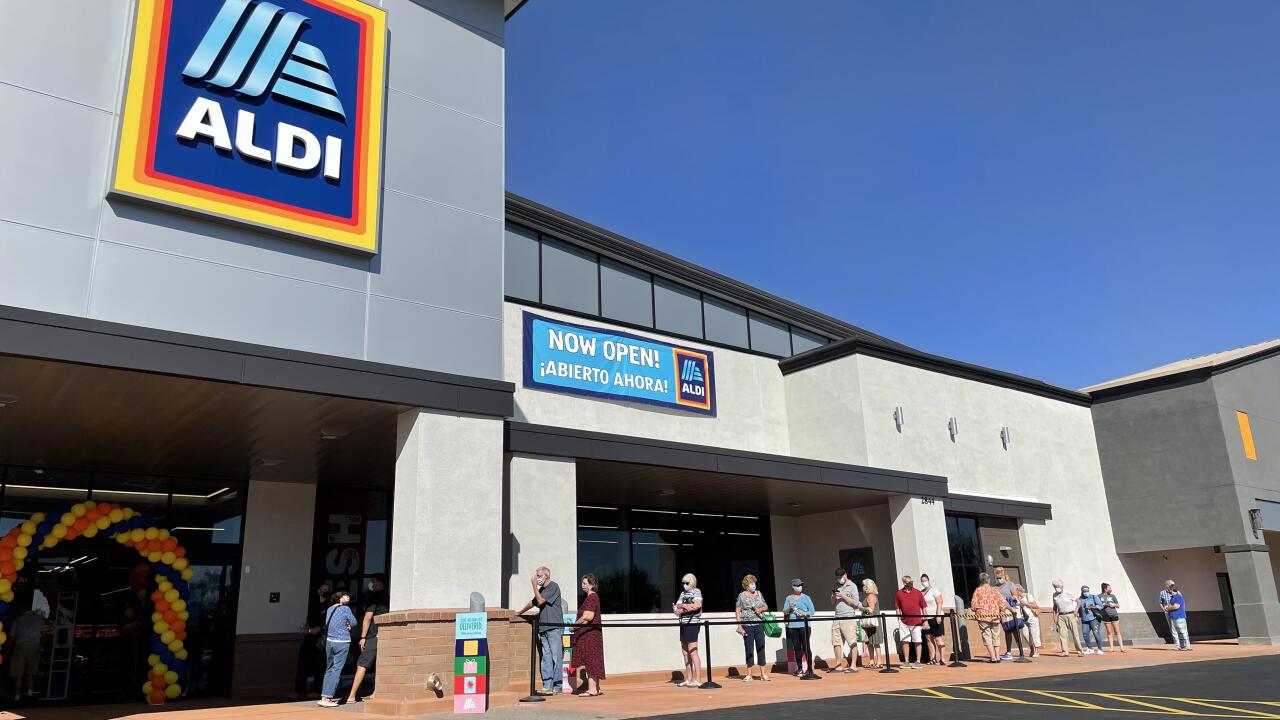 Josh Frigerio, ABC15
Aldi, a discount grocery chain primarily in the Midwest, opened two locations in Chandler and Goodyear, its first stores in Arizona. Two more are opening on Gilbert and Peoria. Aldi carries a lot of the grocery essentials, from fresh fruits and vegetables to meat, cheese, milk, and eggs, as well as breads and pastries, canned goods, and snacks. Most of its products are private labels -- Benton's, Millville, Family Orchard, Simply Nature -- but it does carry some name brands, like Coke, Capri Sun, Gatorade, and General Mills. Also, customers pay to use grocery bags and it costs a quarter to rent a shopping cart.

The wait is over. Aldi has officially made its debut in Arizona.

On Tuesday, the discount grocery chain opened its first stores in Chandler, near Alma School and Queen Creek roads, and in Goodyear, near Interstate 10 and Estrella Parkway.

Two more stores are currently under construction in Gilbert and Peoria, and are expected to open by the end of the year. Opening dates for those locations have not been announced, however.

More locations are expected to be built across the Valley. While Aldi has not confirmed any additional locations, the grocery chain has submitted plans to open stores in Buckeye, Glendale, Phoenix, Mesa, and Scottsdale, all of which are in various stages of the development process in those cities.

PHOTOS: Take a look inside the Aldi store in Chandler

TAKE A LOOK INSIDE

Compared to other grocery stores, Aldi's stores are smaller, similar to that of a Walmart Neighborhood Market, and do not have some of those extra luxuries, such as in-store coffee shops, pharmacies, florists, or a meat counter.

But, it does have the standard grocery essentials, such as fresh fruits and vegetables, meats, cheeses, and milk, as well as breads, canned goods, cereals and snack foods.
It also carries beer and wine, some grab-and-go foods, like pizza and flatbreads, and an assortment of frozen foods.

Most of Aldi's labels are private labels -- Benton's, Millville, Family Orchard, Simply Nature -- with products that appear to mirror their name-brand counterparts, but they do carry some recognizable brands, including Coke, Gatorade, Capri Sun, and some General Mills cereals.

Shoppers have to purchase their own grocery bags, which vary between $0.95 for a standard reusable bag and $1.99 for a larger reusable bag, and have to use a quarter to rent a shopping cart (you get the quarter back when the cart is returned). Aldi said these measures help the company reduce operating costs, which allows them to discount their products.

Here is what we know about Aldi's future plans.

Scottsdale: Aldi has also signed on to open a grocery store at Papago Plaza, which is being reimagined and rebuilt, the developer told reporters at a groundbreaking ceremony last year. It is not known, however, when that location is expected to open.

Editor's note: A previous version of this story mistakenly listed the location of the Goodyear store. That store is located near Interstate 10 and Estrella Parkway, not Loop 101.