10 things to see and do at the Phoenix Police Museum

You'll never guess what the first jail cell in Phoenix looked like!

Did you know across from the Maricopa County courthouse in downtown Phoenix sits a museum dedicated to preserving the history of the Phoenix Police Department?

The Phoenix Police Museum started as a small exhibit in October 1993 and moved to the Barrister Place Building before moving again in 2012 to its current location at the historic old City Hall building (near Jefferson and Second avenues).

It also marks the initial home (and jail) of the Phoenix Police Department -- then referred to as city marshals -- and the place where Ernestro Miranda, the suspect and case behind Miranda rights, wrote his noteworthy confession.

And it's free! (The museum is funded by donations.)

Here are 10 things you can see and do at the museum: 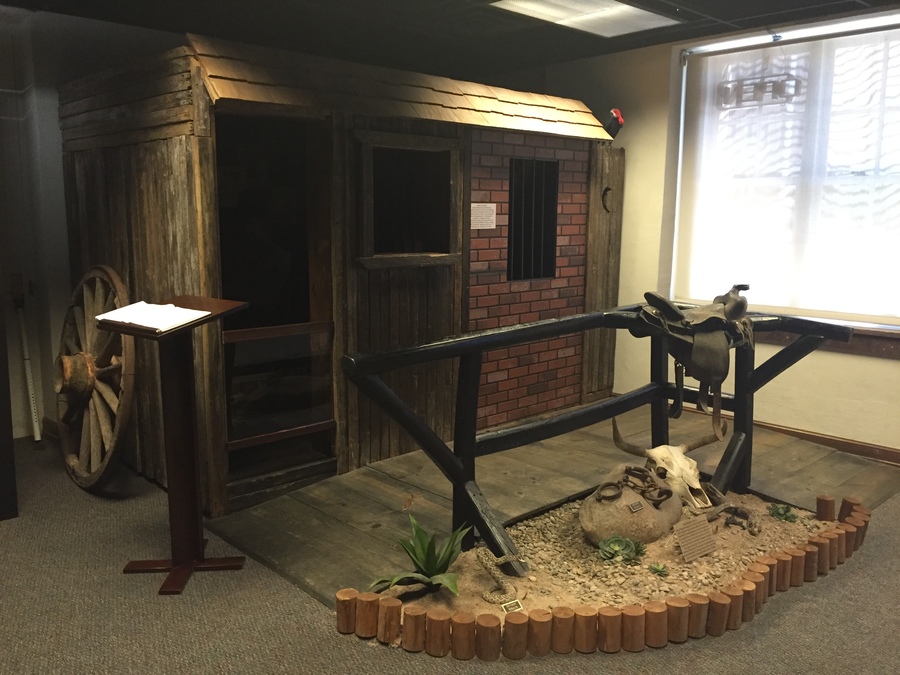 Before it was known as the Phoenix Police Department, officers were known as city marshals. The first Sheriff Marshal was Henry Garfias. There is a replica version of Garfias' office and jail. Inside the jail is inmate, Ottis.

The jail is located where the holding room once was when the Phoenix Police Department was located at the old City Hall building.

View police badges and patches from around the world

The Phoenix Police Department's logo has changed and developed over time. Today's version looks a lot different from the the star-shaped badges from 1890.

They also have patches from police departments around the world. See if you can find your town, city or state represented. 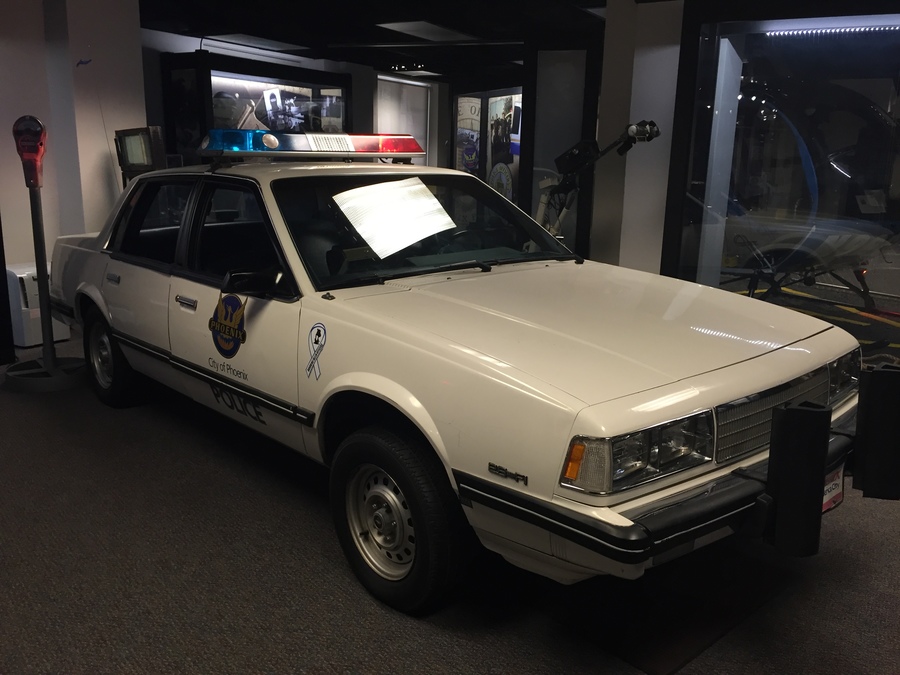 Be sworn in as a police officer

This is a great activity for the aspiring police officers out there. The little ones can put on the Phoenix police uniform and get "sworn in." You can even hop inside a now-retired police cruiser. Make sure to have the police lights turned on (they still work!). 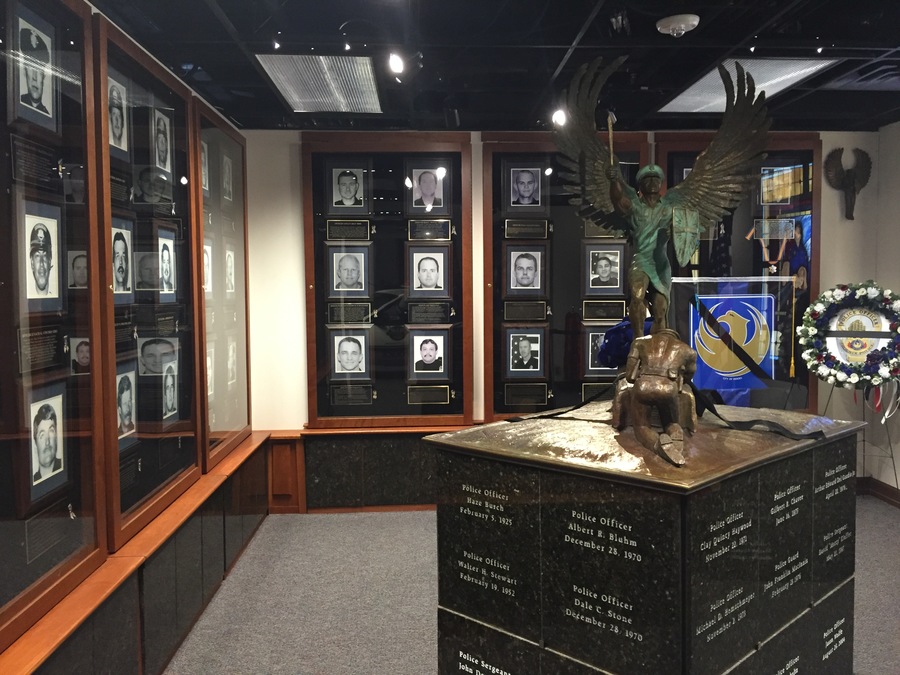 Remember and honor the fallen

This is the toughest and most emotional exhibit at the museum. The Memorial Room shows the names and faces of the 38 police officers and four K-9 officers who have been killed in the line of duty.

Officer Haze Burch was the first Phoenix police officer killed in the line of duty. He was shot on Feb. 5, 1925 by two men who were attempting to siphon gas from a car. 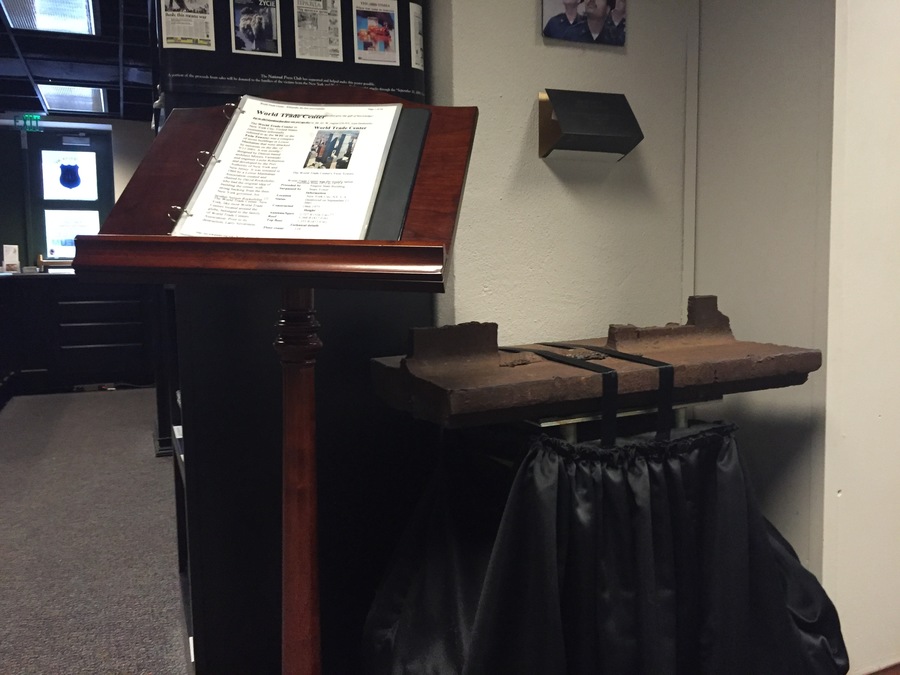 The Phoenix Police Museum has a 300-pound cross-section I-beam from one of the towers that collapsed during the terrorist attacks on September 11, 2001 in New York City. There are also patches, uniforms and pins from NYPD and NYFD. 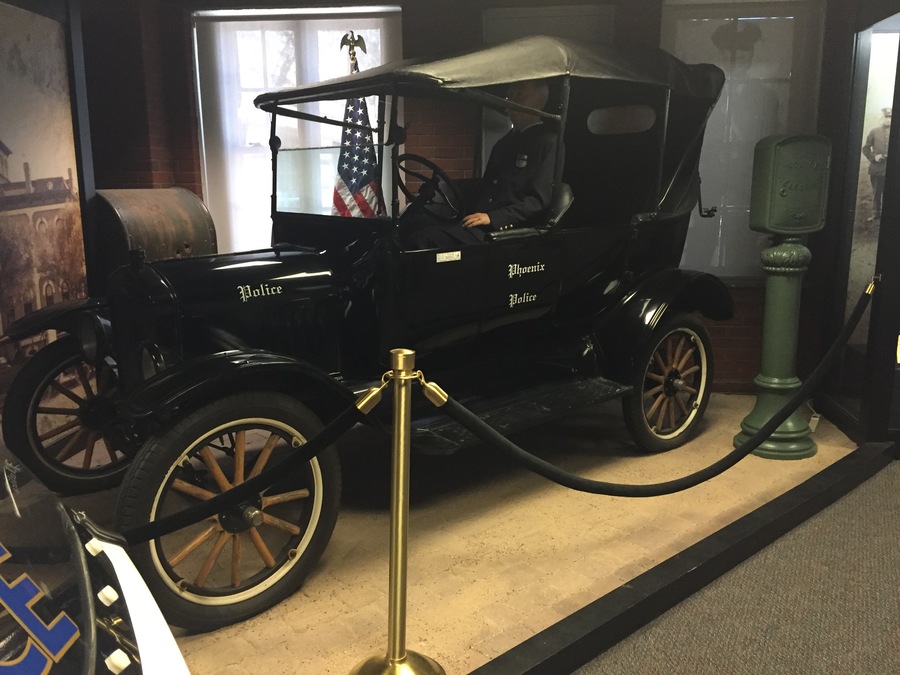 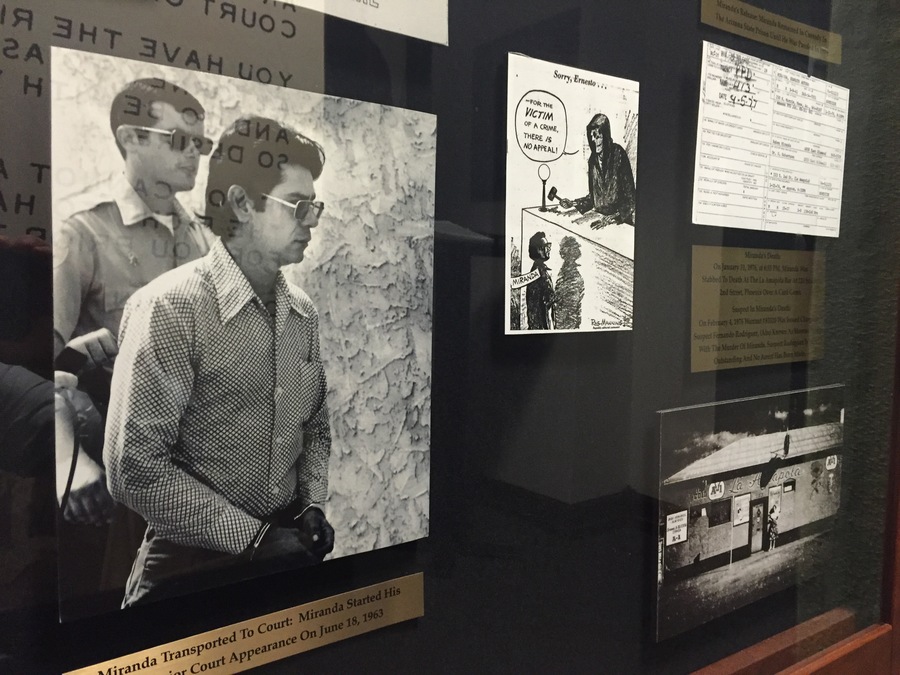 Ernesto Miranda was arrested, accused and subsequently convicted of robbing, kidnapping and raping an 18-year-old woman in 1963. His case went up to the Supreme Court and the ruling changed the way police departments across the country interrogated suspects. You can view Miranda's official police report, his booking photo and his now-famous confession. 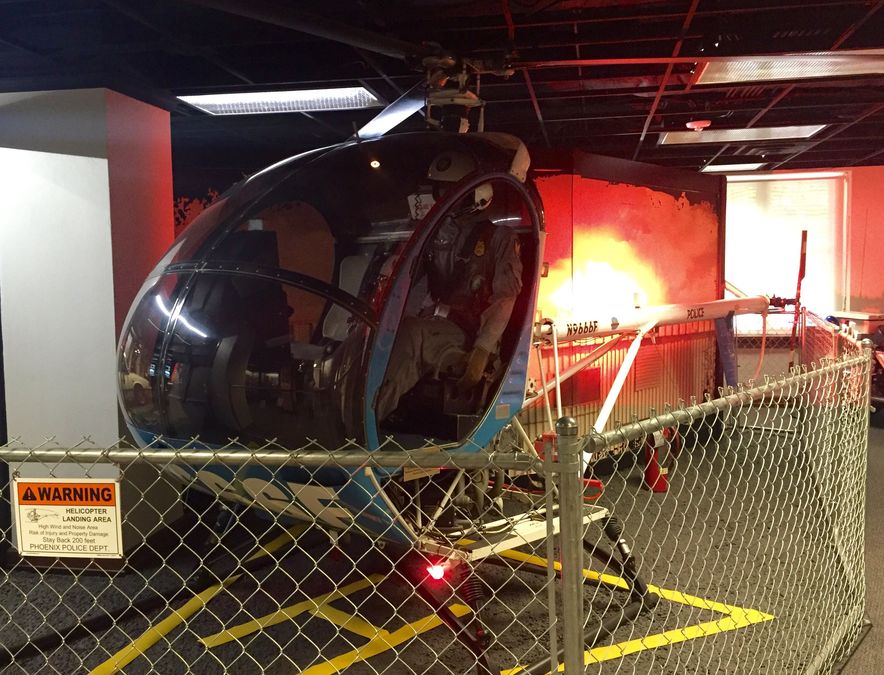 The museum is not a small place. There is a full-size police helicopter on display. You can't go inside, but the lights do work. There are also a three-wheel and a two-wheel motorcycle to look at. 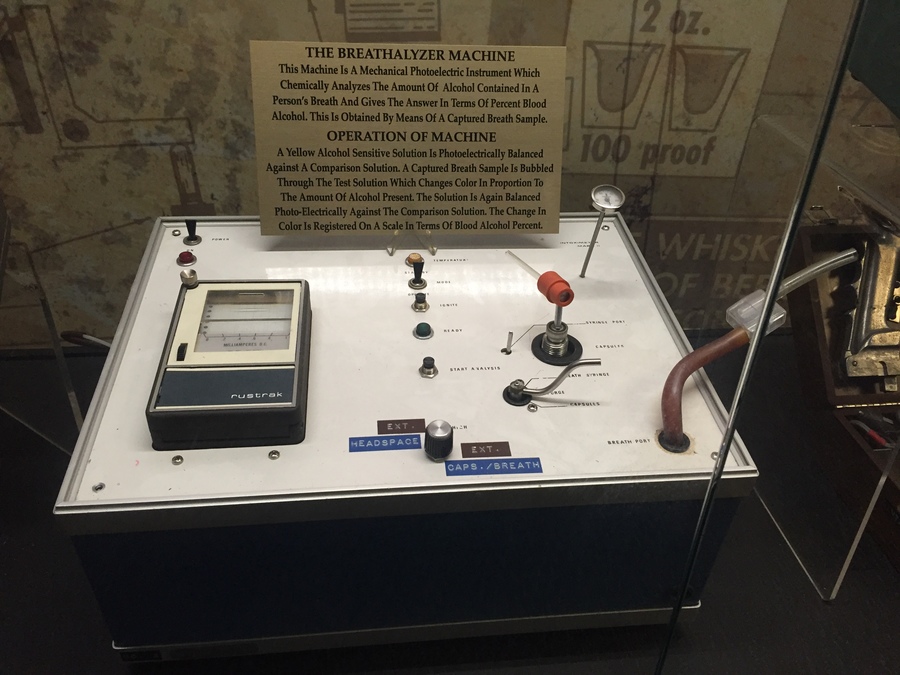 How did police test how drunk people were back in the day? Technology has evolved since then. This display shows some of the equipment used and how it was used to test peoples' blood alcohol levels. 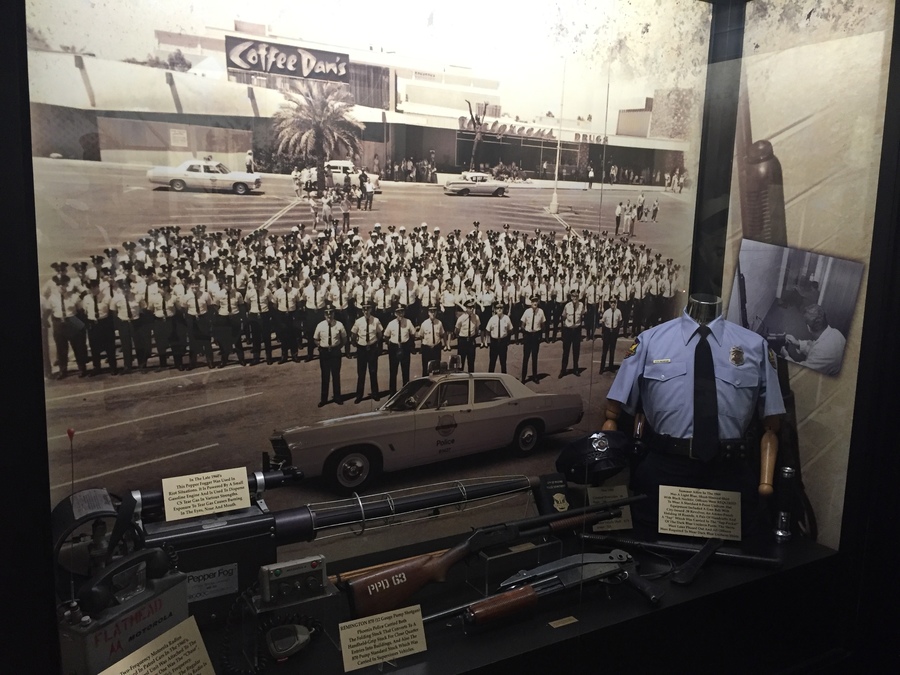 Weapons through the years

Museum secrets: The fifth floor of the Historic City Hall building is where the original jail cells used to be. They're still there. It's not fully open to the public because of ADA and fire codes, but a replica jail cell is in the gallery.

Another secret is that behind a wall in the employee breakroom is the original elevator that was used to take inmates to and from their jail cells. The elevator does not currently work, but the museum is hoping to raise enough money to have it restored and running again. You can donate here.

The museum is located at the old City Hall building at Second Avenue and Jefferson. It is open weekdays from 9 a.m. to 3 p.m. and is closed on all City of Phoenix holidays.

AROUND TOWN: Scottsdale police and Glendale police have museums of their own. The Scottsdale Police Museum is located at their headquarters, 8401 E. Indian School Road, and is open weekdays from 9 a.m. - 5 p.m.