Where does Trump stand on pot? Advocates want to know 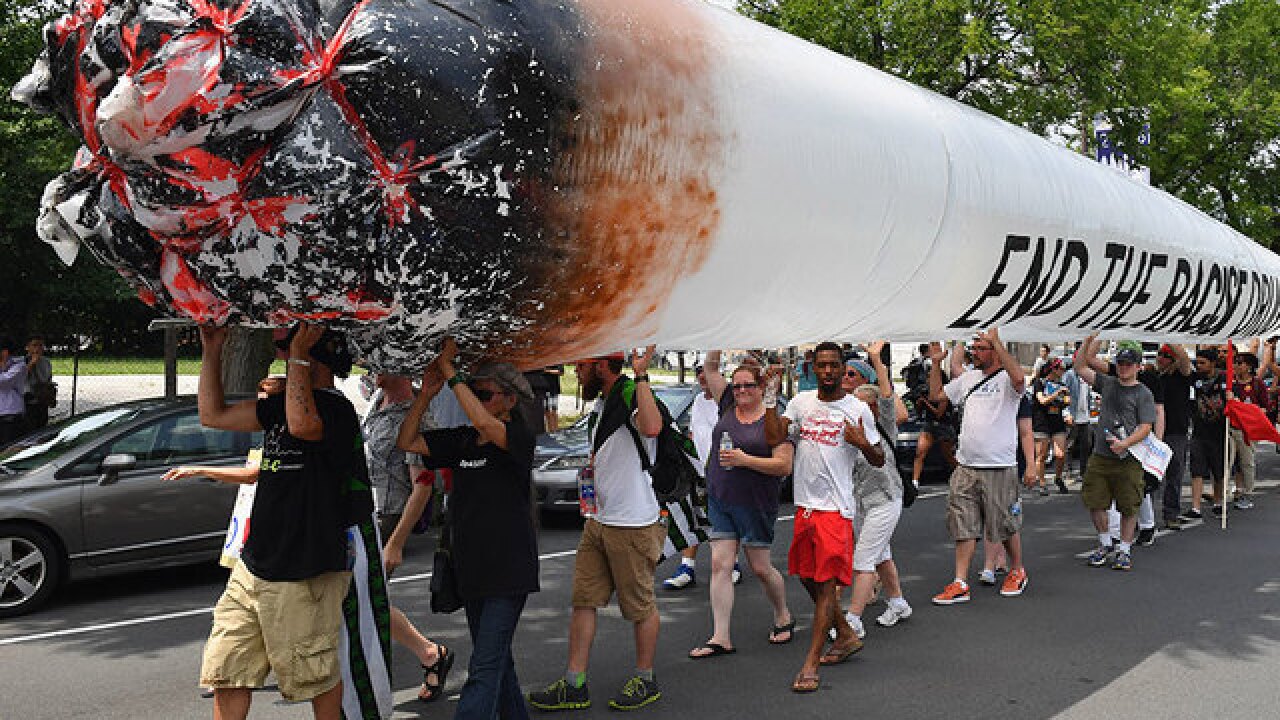 <p>Marijuana activists carry an inflatable joint as they march through downtown on the first day of the Democratic National Convention on July 25, 2016, in Philadelphia, Pa. (Photo by Jeff J Mitchell/Getty Images)</p>

A group of the top political supporters of legalizing marijuana gathered in July at a cocktail reception to toast what they were certain was upcoming national recognition of their cause that would lead to success on Capitol Hill.

“This is the year that this issue crests,” Rep. Earl Blumenauer, D-Ore., a long-time proponent of marijuana reform, said at the time — a time when national polls showed Hillary Clinton leading the race for the White House and Democrats in a position to retake the Senate. “We’ve had six pro-cannabis votes on the floor of the Republican-controlled House of Representatives [this year], so I’m optimistic.”

The occasion was the Democratic National Convention, which in a few days would adopt marijuana law reform on its official platform. The Philadelphia branch of the National Organization for the Reform of Marijuana Laws [NORML] marked the moment by marching a 51-foot marijuana joint from City Hall to the site of the DNC and lit it up at precisely 4:20, a number synonymous with cannabis, for a “celebratory toke.”

The Republican National Convention, held only a week prior in Cleveland, lacked the same amount of fanfare from legalization supporters. In fact, it received none.

“If you wanted to eat steak, you go to Ruth’s Chris, you wouldn’t go to the Hungry Fisher. There would be no one there who would be too interested,” Rep. Steve Cohen, D- Tenn., said of the decision to skip the RNC.

Things didn’t exactly turn out on Election Day the way marijuana advocates expected, and they’re now peering into a new year where emboldened Republicans — some of them far-right Republicans — will not only control the House and the Senate but also the White House. It’s the Trump administration that really has the activists guessing and trying to figure out the right strategy.

“We’re working on this from multiple angles,” said Erik Altieri, executive director of NORML. “We’re having our supporters generate emails to their senators. We’re having them sign a petition to President-elect Trump, attempting to get him to clarify his position on marijuana policy.”

Trump, to put it mildly, was not most marijuana advocate’s first choice for president. The Marijuana Policy Project, a legalization lobby, gave the former reality TV Star a C+ for his smoky positions on cannabis, behind Hillary Clinton who got a B+, and Gary Johnson and Jill Stein who both got As.

But Trump is what they’ve got. And their first step — and perhaps greatest challenge —is determining exactly where the incoming president stands on marijuana law reform.

In the 1990s, when he was a registered Democrat, Trump spoke about the need to legalize all drugs in order to take profits away from drug czars. More recently, in the few times he’s mentioned the cannabis debate, his position has been more passive.

"In terms of marijuana and legalization, I think that should be a state issue, state-by-state,” Trump told the Washington Post in the fall of 2015. “Marijuana is such a big thing. I think medical should happen — right?”

Trump again seemed to support legalizing medical marijuana in a February interview with Fox News’ Bill O’Reilly when he said he’s “in favor of medical marijuana 100 percent” but seemed to backtrack on recreational use and said that in Colorado, where the drug is legal for adult use, it’s “causing a lot of problems.”

Although the president-elect hasn’t made any public statements about marijuana laws since he won the election, one of his Cabinet nominations and other names being mentioned for appointments might not bode well for legalization.

How to handle Sessions?

Sen. Jeff Sessions, R-Ala., whom Trump appointed to be attorney general, has made some strong — if not controversial — comments about marijuana.

As a U.S. Attorney in Alabama in the 1980s, Sessions said he thought KKK members "were OK until I found out they smoked pot.” And then this past April, he said, “Good people don't smoke marijuana,” and that marijuana was a "very real danger" that is “not the kind of thing that ought to be legalized.”

“Well certainly Sessions’ nomination gives us pause,” Altieri said. “On the campaign trail Donald Trump had promised to treat it as a states rights issue. Then when you put someone like a Jeff Sessions up for the top law enforcement post in the land, that gives us concern.”

Then there’s Rep. Andy Harris, R-Md., a physician whom Trump reportedly is considering for director of the National Institute of Health. He was largely responsible for blocking Washington, D.C.’s right to tax marijuana sales in the district despite the city’s residents voting overwhelmingly to pass the law.

Trump also is said to be considering Florida Attorney General Pam Bondi for a high level post. Bondi focused the majority of her attention in the Sunshine State on clamping down on drug use and sales, including marijuana.

Recreational marijuana for adult-use is legal in eight states and medical marijuana is legal in 28, plus Washington, D.C. Statistically more than half of the population lives in a state with some sort of legal access to the drug. Public opinion regarding marijuana use has changed drastically over the years. An October Gallup poll found that 60 percent of Americans believe cannabis should be legal, but it’s unclear whether public sentiment will influence Trump, Sessions, other members of his team or Republicans in Congress.

A crack-down by federal authorities on cannabis use in states that have legalized it could be disastrous for cannabis-based businesses operating in the open. Although state law can make cannabis legal within a state’s borders, federal law still considers cannabis a Schedule I drug, which puts it in the same category as heroin, and therefore illegal, regardless of what states laws say. Previously Obama directed U.S. attorneys in all 50 states to only focus on the most “significant threats” involving the drug, but the new Trump administration could change that policy.

It’s a reality that cannabis lobbyists such as NORML and the Marijuana Policy Project are trying to downplay.

“It’s too early to develop that level of concern,” said Mason Tvert of the Marijuana Policy Project. “Don’t get me wrong, what Sessions has said, his comments are concerning, but so have been comments from people like [Vice President Joe Biden] and others who have been involved in past administrations who had to go along with what the president wanted to do. They will serve at the pleasure of the president elect.”

Altieri said that NORML is trying to be as proactive about Session’s nomination as possible.

“We’re reaching out to our allies in the Senate and to see what the appetite is for opposing a Sessions’ nomination — working to see if there’s any possibilities to protest his nomination,” he said.

And some members of Congress do plan to hammer Sessions on his views.

“I will be unrelenting on issues of medical marijuana [at the hearing] and just continue to keep pushing it because it’s an issue of justice and fairness and our current state of affairs to me is outrageous and tinged with hypocrisy,” Sen. Corey Booker, D-N.J., told DecodeDC.

Booker, along with Sens. Kirsten Gillibrand, D-N.Y., and Rand Paul, R-Ky., introduced federal legislation in the Senate in 2015 that would legalize access to medical marijuana.

“We’re getting a lot of momentum on picking up Republicans and Democrats in our CARERS Bill, so I’m encouraged on the progress that we are making. I’m not sure what that means under a Trump White House, but I’m encouraged,” Booker said.

Blumenauer, along with Rep. Dana Rohrabacher, R-Calif., plans to launch a bipartisan Cannabis Caucus at the start of 2017 to bring together members of Congress who support marijuana reform.

“There needs to be more strategy between us, those of us who are engaged in this. More of a long term strategy,” Rohrabacher told DecodeDC. “[And] we need to have a vehicle in which people on the outside will be able to work through and sort of have a team effort from the inside and the outside.”

Many advocates are now admitting that pushing through federal marijuana legislation will be an up-hill battle in 2017. They still hold out hope public sentiment will be enough to drive a policy change regardless of who has control of Congress and the presidency. And if all fails in Washington — as it has so far — there’s always the option of focusing on the states.

“There will be a lot of state-level activity involving legislatures, specifically this year, when it comes to regulating adult use,” Tvert said.

“It’s full steam ahead. Support for making marijuana legal is at an all time high,” he said, perhaps pun intended.