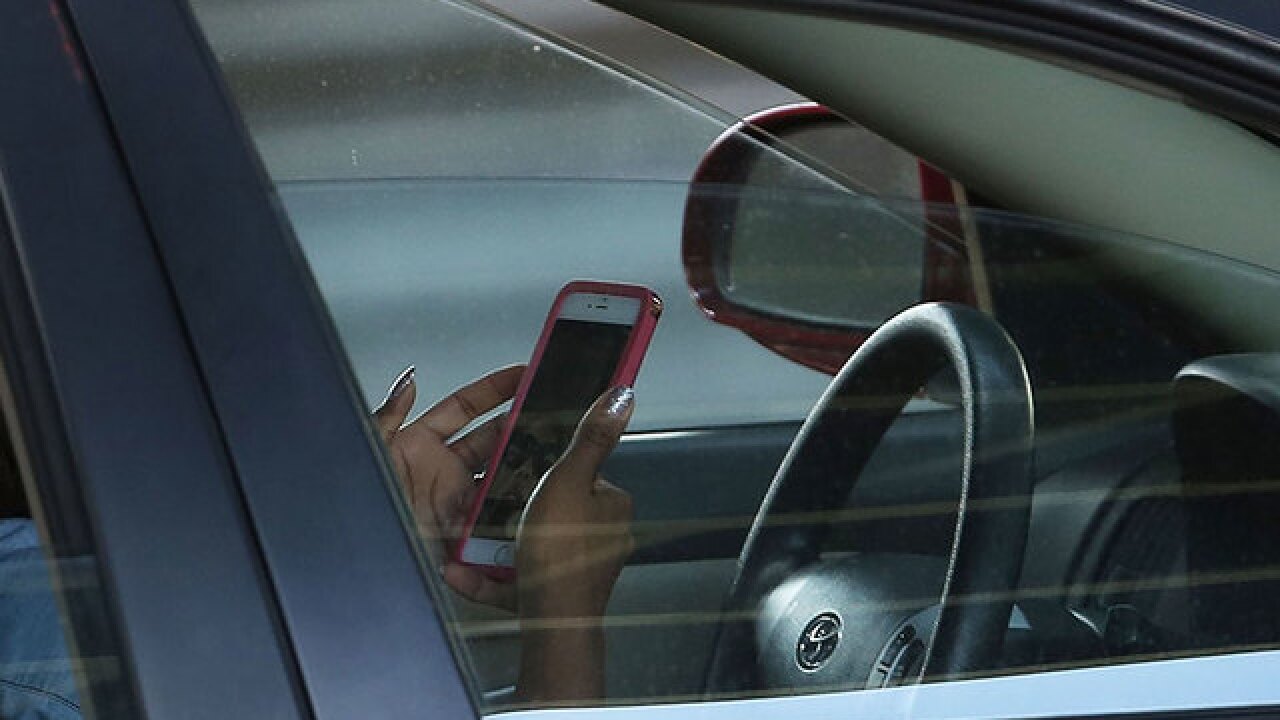 Copyright Getty Images
<p>A driver uses a phone while behind the wheel of a car on April 30, 2016, in New York City. (Photo by Spencer Platt/Getty Images)</p>

(To the readers: I’m taking a break this week from writing about politics to share a rant I can’t resist. My guess is that many of you can relate — unless you’re one of the ones captivated by your smartphone.)

Driving a car is one of the basic activities of everyday life that is unquestionably getting more and more unpleasant. There is no argument about it. There’s no blaming Obama, Clinton, Trump or Kanye West. The fault is in ourselves. We have allowed our addiction to devices and little screens to turn us into incompetent and dangerous navigators of the physical world.

A modern, high-tech version of Prohibition is what we need, though maybe more draconian.

We featherless bipeds evolved over time, for example, to walk without colliding with a cactus. Humans could reliably remember how to travel from home shelter to water source to hunting ground and back. Humans long had the ability to do one thing at a time. For instance, a hunter could carve a spear over many hours without needing tom-tom music to prevent boredom.

These abilities have atrophied at a catastrophic rate during the digital “revolution” (I prefer the word “apocalypse, which some scolds find hyperbolic). State of the art neuroscience informs us that cognitive functions and the brain parts that control them can waste away when under used.

My concern is that the suites of cognitive tools humans need to drive and ambulate safely are on the endangered list, like jousting or harpooning whales.

There is no doubt driving is getting more dangerous.

The National Highway Traffic Safety Administration reports traffic fatalities increased 7.2 per cent from 2014 to 2015, when 35,092 Americans died in car accidents. This comes despite improvements in car safety, air bags, seat belts and other fancy stuff.

Sure, you say, but there are obviously more people on the road so more of them are going to go bye-bye. Wrong. Vehicle Miles Traveled (VMT for the junkies) went up 3.5 per cent from 2014 to 2015, less than half the increase in the fatality rate.

Pedestrian deaths by motor vehicle increased an estimated 10 per cent in 2015. In the first six months of the year, 2,368 pedestrians were killed.

Then there are bicyclists who increasingly pedal on country roads, suburban strips and city streets. The Insurance Institute for Highway Safety says 817 cyclists were killed in car crashes in 2015, a whopping 13 per cent increase from 2014. About 54 percent of bicycle casualties were not wearing helmets. What can you say about that?

There is a sophisticated debate about these dreadful statistics, conducted primarily by experts with vested interests. But every mildly observant and competent driver who is not — repeat, not — addicted to little screens and ear-invading modules knows exactly what is causing the growth of road kill. It’s the devices and their diabolical capacity to turn a physically competent specimen into an impervious, selfish menace. And it is the fast erosion of the ability to uni-task.

How many times have you seen someone walk off a curb into traffic in full stride staring at his or her little iPhone screen? I live in Washington, D.C., have a short commute, and see this at least five times a day.  Usually these sidewalk zombies also have their ears plugged, deaf to all noise but what their pods inject.

It is said that Native Americans in the olden days navigated great distances by remembering landmarks, understanding how flora changed as it neared water or higher elevations, reading cloud patterns and so forth.  When the white men came, they couldn’t do that.  They had to make maps. And when Native Americans came to use these maps, their ability to navigate by nature disappeared.

In the olden days when I took a road trip, I studied paper maps and memorized the route, distances and milestones. The mental map was stored and I could do it all again.  Now, I plug info into my GPS.  I mostly get where I want, but I don’t feel independent and I forget the route and terrain instantly. Young people don’t bother with analog maps.

Young and old, now we drive around suckling on some device to get us to our destinations or just to amuse, mildly distracted from driving skillfully enough to avoid the texting hipster stepping off the curb deafened by ear buds.

Short of that, we might need self-driving cars sooner rather than later. I suppose computer-controlled pedestrians are next.