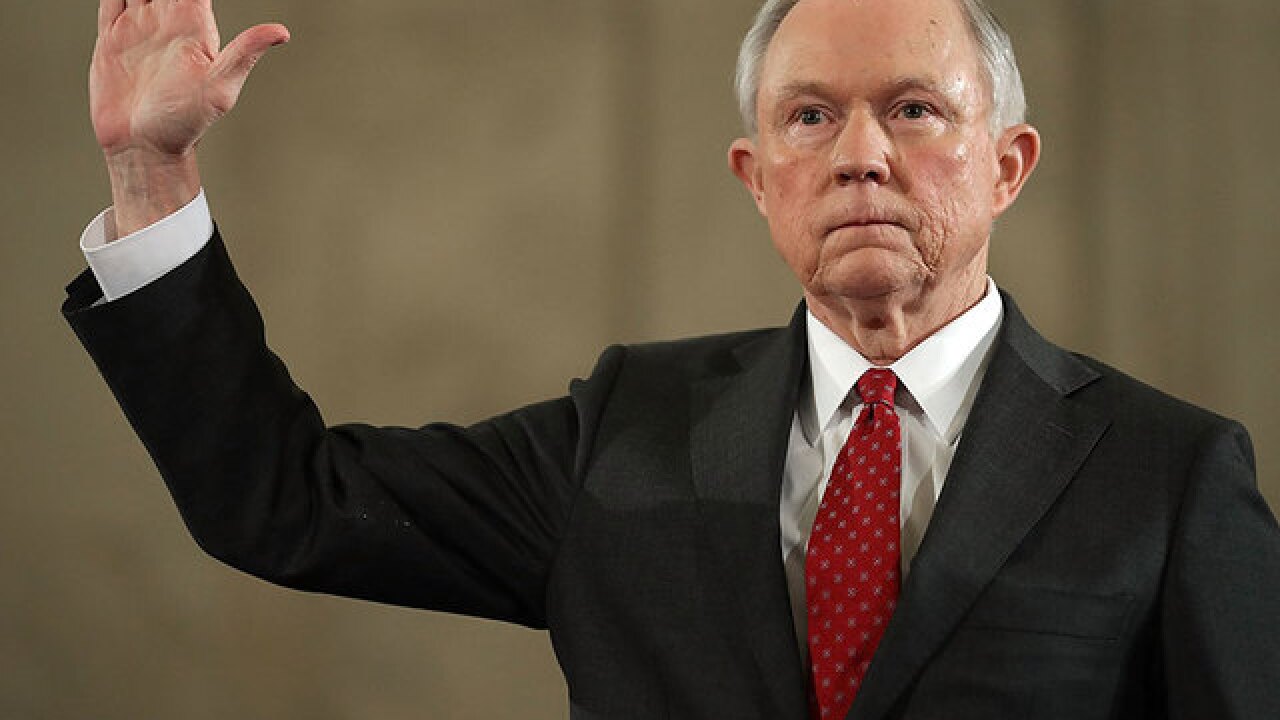 Image copyright 2017 Getty Images. All rights reserved. This material may not be published, broadcast, rewritten, or redistributed.
<p>Sen. Jeff Sessions (R-AL) is sworn in before the Senate Judiciary Committee during his confirmation hearing to be the U.S. attorney general Jan. 10, 2017, in Washington, D.C. (Photo by Chip Somodevilla/Getty Images)</p>

Reports that Attorney General Jeff Sessions met twice with the Russian ambassador to the United States last year — meetings that Sessions did not disclose during his confirmation hearings — already are affecting investigations into Russia’s operations during the campaign and could lead to new inquiries.

Sessions recused himself from such investigations Thursday afternoon. The attorney general said top ethics officials at the Justice Department had recommended recusal and that he agreed with their recommendation. He told reporters at a press conference that he would not participate in investigations "related in any way to the campaigns for president of the United States."

But some top Democrats already are demanding Sessions resign.

“After lying under oath to Congress about his own communications with the Russians, the Attorney General must resign,” House Minority Leader Nancy Pelosi said in a statement released late Wednesday night, adding that “Sessions is not fit to serve as the top law enforcement officer of our country.”

Sessions’ recusal from any FBI investigations related to Russia’s alleged efforts to influence or disrupt American elections and the Trump campaign’s contacts with Russia do not preclude an entirely separate investigation into whether Sessions perjured himself before the Senate Judiciary Committee.

Importantly, the House and Senate intelligence committees already are investigating Russia’s “active influence” campaign, the phrase used by the intelligence world. Sessions’ new problems won’t affect these inquests directly, though they do up the pressure on Republican-controlled committees. In any event, congressional committees cannot investigate or bring charges in a criminal case.

The Russia investigation can now proceed in two directions. The acting deputy attorney general could take over supervision of the case or appoint a special counsel.

The first path is fraught. Right now  Dana Boente , the U.S. Attorney for the Eastern District of Virginia, is the unconfirmed, acting deputy attorney general. His predecessor, Sally Yates, was a holdover from the Obama administration, and she was fired after she refused to defend President Trump’s original travel ban. Attorney General Sessions’ chosen deputy, Rod Rosenstein, now U.S. Attorney for Baltimore, hasn’t been confirmed.

The prospect of either a temporary official or a new appointee beholden to Sessions and Trump steering such a high-profile investigation would not be tolerable to Democrats for sure and probably many Republicans as well.

The second path would entail the appointment of an independent, special counsel by the Justice Department. A chorus of Democrats and a few Republicans had been calling for a special counsel long before the current reports about Sessions. But Congress cannot trigger or order such an appointment.

According to Washington University Law School professor Kathleen Clark, the current situation demands a special counsel. “We need someone completely independent of the control of the Justice Department and the current Republican administration.” Clark added that the Justice Department’s internal regulations make it clear that Attorney General Sessions should recuse himself.

The process now is guided by Justice Department  regulations :

(a) That investigation or prosecution of that person or matter by a United States Attorney’s Office or litigating Division of the Department of Justice would present a conflict of interest for the Department or other extraordinary circumstances; and

(b) That under the circumstances, it would be in the public interest to appoint an outside Special Counsel to assume responsibility for the matter.

Clark points out, however, that the attorney general has the authority to appoint special counsels apart from these regulations. For example, in 2003, Attorney General John Ashcroft recused himself from the investigation of an executive branch leak that revealed the name of a covert CIA employee, Valerie Plame, and then the Deputy Attorney General, James Comey, appointed a special counsel, Patrick Fitzgerald. Comey, of course, now heads the FBI.

A special counsel was appointed under these regulations in 1999 when former Missouri Senator John Danforth was appointed to investigate the federal raid on the Branch Davidian Church in Waco, Texas.

However, the attorney general or designee has an even broader authority to appoint independent investigations. According to the Congressional Research Service:

In addition to the specific special counsel regulations promulgated in 1999, the Attorney General of the United States, under the general statutory authority of the Attorney General to hire staff and oversee the conduct of federal criminal investigations and prosecutions, may appoint staff to the Department of Justice on a part-time or intermittent basis, or may re-assign current prosecutorial personnel already employed by the Department, to conduct and coordinate particular criminal investigations and possible criminal prosecutions.

The bottom line is that a special counsel in any form can only be appointed at the discretion the Justice Department. Congress can petition and pressure, but not appoint.

But it is politics, not law, that will determine whether Russia’s “active influence” campaign will be investigated by an authority independent of the Justice Department.