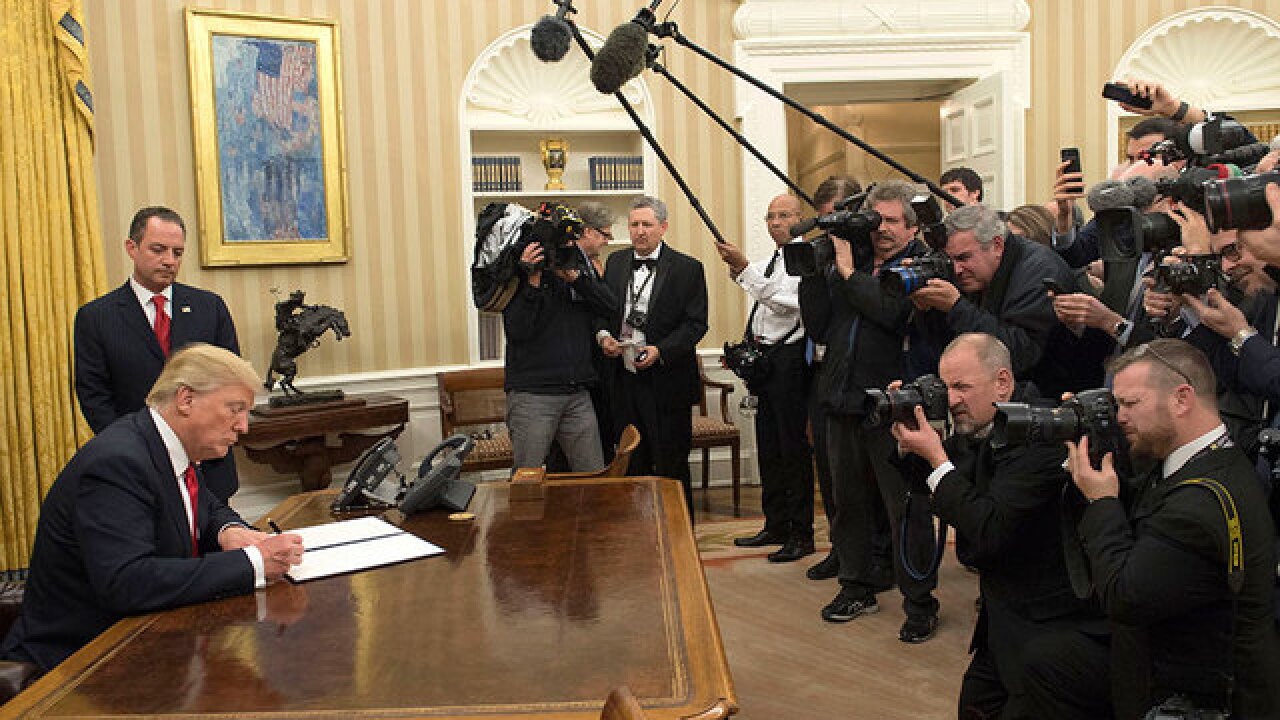 Using the unofficial new White House platform of record, Twitter, President Donald Trump embraced the health care plan unveiled Monday by House Republicans as “our” package. This seemingly gets the Trump White House off the hook for criticism that it has not led on the issue and proposed a solution to the Obamacare “disaster,” as Trump calls it.

Our wonderful new Healthcare Bill is now out for review and negotiation. ObamaCare is a complete and total disaster - is imploding fast!

Now Trump and the House GOP have a plan to call their own.  Apart from unknowns about the details of the plan (including basic ones such as exactly how many people will gain or lose coverage and what are the costs) and its prospects of actually passing, there are two fundamental questions that are being widely posed about the American Health Care Act (AHCA), which is already tagged as TrumpCare: What problems is the plan trying to solve?  Who will like the plan?

“In general, it's not clear what problems this particular bill would actually solve,” writes Peter Suderman on Reason.com , a leading libertarian and pro-free market site.

Trump’s famous and frequent claim that the Affordable Care Act was a “disaster” did not come with a companion guide to specific problems and solutions. Different complaining constituencies focused on different problems or, importantly, perceived problems.

For example, some who have received health coverage thanks to the ACA still complained that premiums and/or deductibles were too high, the system was hard to navigate and their choices were too limited. Some who had coverage from other sources believed the ACA made their own health insurance costs go up or thought they were unfairly subsidizing “Obamacare” with higher taxes.

Then there are the more philosophic or ideological criticisms from the right:

The ACA wrongly established a right to health care; the mandate that individuals get health insurance or be penalized is anti-free market and compromises individual liberty.

Another early criticism of the ACA was that it was drafted in secrecy. Republicans are now saying the same thing about the Trump-House GOP bill. Indeed, Sen. Rand Paul, R-Ky., held a mini-protest outside one of the committee rooms last week. More important, Congress relies on a “scoring” report from the Congressional Budget Office to determine details of what a bill will cost, whom exactly it will cover and how will the systems operate. But there is no CBO scoring report yet.

However, none of the early reviews indicates how or if the Trump-House GOP plan would cut premiums overall; some changes would lower premiums for young people but raise them for older Americans.

Though the official CBO score isn’t in, most of the early analyses conclude the plan would leave more Americans without coverage. That means taking away a valuable, basic benefit people now receive.

The new proposal would keep most of the ACA infrastructure, like exchanges, intact so there would be no great bureaucratic shrinkage.  Contrary to what conservative and libertarian Republicans on the right want most, the Republican proposal essentially reaffirms the right to health insurance and the government role in providing it.

The Trump-House GOP plan does get rid of the so-called “individual mandate” but only nominally.

People without insurance now may have to pay a tax penalty to the government (that’s the “mandate”).  The new plan abolishes that tax penalty, but it gives insurance companies permission to hit customers who let insurance lapse for more than 63 days with a 30 percent surcharge. This could weaken the incentive to obtain insurance and that in turn shrinks the pool of insured Americans and weakens the system.

The Republican bill does keep the two most popular elements of the ACA: Parents can still keep children on their plans until they are 26 and individuals cannot be denied coverage because of their pre-existing conditions.

Contrary to what many Republicans have been demanding, the new GOP plan will not completely eliminate the expansion of Medicaid coverage that many states now utilize, but it will scale it back substantially. The expansion will be “frozen” on Jan. 1, 2020 — no new enrollees after that — and there will be new per capita limits on Medicaid funding.  Critics say that will drastically cut coverage for poorer people; Republicans say it will deliver the cost cuts in Medicaid they want.

On the positive side from the Republican perspective, the GOP proposal repeals the 3.8 percent tax on investment income and a 0.9 percent tax on wages imposed by the ACA, unfair subsidies in the eyes of conservatives. These taxes were paid by the top 2.5 percent of taxpayers and yielded almost $29 billion in 2015, according to recent IRS statistics.

How will the revenue gap be filled? Republicans did not propose ending the tax deduction for employer provided health insurance. They did, however, keep the ACA’s “Cadillac” tax on expensive plans but delayed it to 2025.

The GOP also would allow insurance companies to charge older people much more than the ACA allows — not a great recipe for popularity.

In sum, the Republican plan can credibly claim to reduce the amount of total dollars the federal government will spend on health coverage, reduce taxes on high-income taxpayers and  increase benefits of Health Savings Accounts.

How it will benefit ordinary consumers, avoid a large increase in the numbers of the uninsured and meet the philosophic mandates of conservatives is unclear.

That all leads back to the question of what are the big problems this bill solves?

“The GOP's real problem, in terms of passing legislation, isn't that the party can't agree on specifics, or that legislators need to bargain their way toward a compromise that gives everyone something they want,” say Reason.com’s Suderman. “It's that they don't agree on, or in some cases even have, basic goals when it comes to health policy. This bill, and the aura of secrecy surrounding it, seems more like a wish and a hope that this essential problem goes away rather than an attempt to truly solve it.”

It is easiest to answer this question in the negative.

Democrats already have said with near unanimity that they hate the Trump-House GOP bill. Predicable? Yes, but still a problem. Remember, Republicans can’t lose more than two of their own votes in the Senate and 22 in the House to pass any bills if no Democrats join their cause.

Congressional Republicans in both chambers aligned with the Freedom Caucus ideology already have condemned the new bill as ObamacareLite or Obamacare 2.0.  A squadron of conservative think tanks bombed the AHCA within hours of release.

Their top priorities always have been fundamental and long-term; they want to get the government out of providing health care and they do not want health insurance to be established as a new right or permanent entitlement.  This bill gives them nothing.

Less conservative Republicans, called “moderates” in the olden days of the late 20th century, are worried about the disruption the GOP plan could cause and the political rebellion that seems likely if millions of people with health coverage now under the ACA lose it. Four Republican senators wrote a letter to their leadership this week warning of the consequences of rolling back Medicaid coverage, a point Republican governors led by Ohio’s John Kasich made to President Trump last month.

Finally, Republicans may have stirred up a new nest of enemies — people in their 50s and early 60s who are retired, juggling part-time jobs or unemployed.  The Trump-House GOP plan would increase their costs and possibly obstruct their access to insurance.

So who loves the plan?

The answer would seem to be: President Trump and congressional Republicans who promised to replace “Obamacare” with something — anything — and who are not constrained by political philosophy or policy details.

“It's not clear what constituency this bill is designed to satisfy, aside from Republican congressional leadership,” write Reason.com’s Suderman. “It doesn't go far enough for conservatives, but may not be generous enough to appease more moderate Republicans either…. [It’s] a muddled vision of what a political compromise might look like, in some hypothetical world where Republicans actually agreed about health policy."