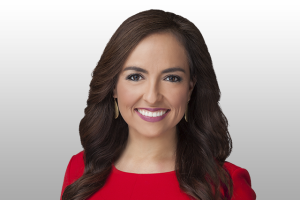 Iris Hermosillo is the weekday meteorologist on ABC15 Mornings.

She joined the ABC15 Forecasters team in December 2012 after spending several years covering severe weather in the Midwest.

She’s a proud Sun Devil who graduated from ASU's Walter Cronkite School of Journalism and Mass Communications, where she majored in broadcast journalism.

She later received a certification in Broadcast Meteorology from Mississippi State University.

Iris has been in the broadcast industry for more than 10 years, starting her professional career in Joplin, Missouri. She also spent a few years forecasting in Kansas City, Missouri.

Iris has experience forecasting all types of weather; everything from severe storms and tornadoes to snow and ice storms. Now, she focuses her efforts on tracking our dangerous monsoon storms and forecasting the excessive heat we often feel in the Valley.

Iris is passionate about keeping people safe and informed about the weather, especially when it becomes threatening. While working in Kansas City, Iris was one of the first Kansas City reporters to arrive in Joplin after the 2011 tornado that tore through the center of the town. It was one of the toughest stories she's ever covered and she calls the experience a reminder that a meteorologist's number one priority is to make sure viewers are safe and prepared ahead of the storm.

Television meteorologists are often the scientists people turn to for weather information, and Iris knows that makes her role a critical one. She uses her platform to deliver accurate forecasts that prepare people for day to day changes.

When she’s not busy providing the Most Accurate Forecast, you can find Iris spending time with her husband and their cat. They enjoy working on house projects, traveling around the state, eating at new Valley restaurants and cheering on various sports teams.

Iris grew up an Arizona Cardinals, Diamondbacks, and Phoenix Suns fan, but you’ll also hear her rooting for the Kansas City Chiefs and Royals, her husband’s home teams.