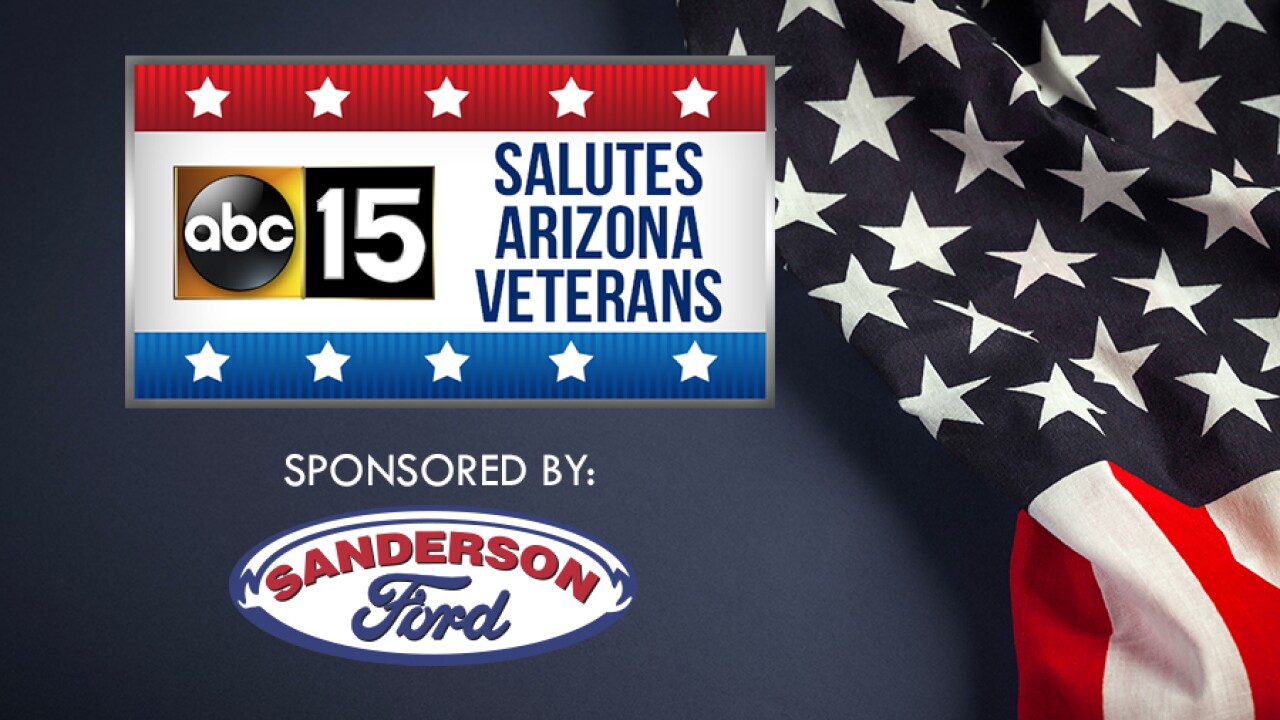 NO PURCHASE NECESSARY TO ENTER OR WIN. A PURCHASE WILL NOT INCREASE YOUR CHANCES OF WINNING.

The ABC15 Salutes Arizona Veterans Contest (“Contest”) begins on April 28, 2019 at 12:01 AM Mountain Time (“MT”) and ends on May 12, 2019 at 11:59 PM MT (“Promotion Period”). The time will be determined by Sponsor’s timekeeping systems. Sponsor will have the sole discretion in determining the timeliness of any action or inaction related to this Contest. All times mentioned in these Official Rules are Mountain Time unless expressly noted otherwise. To participate, a nominator (“Entrant”) will submit a nomination (“Nomination”) nominating a veteran (“Veteran”) in the Contest.

TO ENTER: During the Promotion Period, an Entrant can nominate a Veteran for the Contest by going to http://www.abc15.com/veteran and following the on-screen instructions to complete the online Nomination form. Entrants will also be required to submit an essay describing how the Nominee has gone above and beyond the call of duty and why he or she deserves to be chosen to be the winner of the Contest (the “Essay”). The Essay must be in English and no more than 500 words. All information provided must be truthful, accurate and complete.

Incomplete Nominations will be disqualified. Entrants may not enter the Contest more than once, which means that an Entrant cannot nominate more than one Veteran, and a Veteran cannot be nominated more than once. If a Veteran is nominated more than once, only the first Nomination received will be eligible. Illegible and incomplete Nominations are void. Sponsor is not responsible for interrupted, distorted, or incorrect broadcast information; lost, late, misdirected Nominations; or Nominations not received for any reason. If there is a dispute over who submitted a Nomination, the Nomination will be deemed to have been submitted by the authorized account holder of the email account identified on the Nomination form. The authorized account holder of an email account is deemed to be the natural person who is assigned

to an email address by an Internet access provider, service provider, or online organization responsible for assigning email addresses for the domain associated with the submitted email address. Received Nominations (but not the Essays) become the property of Sponsor and will not be returned.

Submitted Materials: Each Essay must satisfy all of the following submission requirements (the “Submission Requirements”:

· The Essay must be the original creation of Entrant.

· The Essay must not portray any recognizable individual without their prior consent, including consent from the Veteran.

· Entrant must either own all rights to the Essay or otherwise have the right to submit the Essay in the Contest and to provide the rights to Sponsor as set forth herein.

· The Essay must not portray any dangerous activity.

· The Essay must not infringe any third party’s intellectual property right.

· The Essay must not contain illegal, indecent, obscene, pornographic, or sexually explicit content, or otherwise offensive material or inappropriate content such as aberrational behavior, graphic violence, drug abuse, or nudity.

· The Essay must not promote bigotry, racism, hatred or harm against any group or individual or discrimination based on race, gender, religion, nationality, disability, sexual orientation or age.

· The Essay must be non-defamatory and must not invade any third party’s right of privacy or publicity.

· The Essay must otherwise be appropriate for publication or broadcast or display on a general interest website.

By submitting an Essay, Entrant grants to Sponsor (and to those acting on its behalf) a non-exclusive, perpetual, world-wide, royalty-free license (and waives all moral rights in and to the Essay) to display or otherwise use the Essay in connection with this Promotion and as set forth herein.

If Sponsor determines, in its sole discretion and at any time during the Promotion Period, that any Nomination violates the Submission Requirements, is otherwise unsuitable, offensive, or in poor taste, or violates these Official Rules, Sponsor reserves the right to remove and disqualify the Nomination. Sponsor retains sole discretion as to whether any Nomination satisfies the Submission Requirements and the Official Rules.

WINNER SELECTION: A panel of judges will select five (5) potential winners based on the compelling nature of the Essay based on the criteria set forth above. Decisions of Sponsor are final on all matters. If there is a tie for the fifth position, Sponsor in its sole discretion will make the tie-breaking decision. Limit one prize per person and per household address.

WINNER NOTIFICATION AND RELEASES: On or around May 15, 2019, Sponsor will attempt to notify potential winners via phone. If a potential winner: (a) does not respond within 2 business days of initial notification attempt; (b) is not in compliance with these Official Rules, (c) does not meet the eligibility requirements, (d) declines the prize, or (e) does not sign and return required documents or provide required identification by deadlines established by

Sponsor, he or she will be disqualified and an alternate winner will be selected by applying the criteria set forth above. Each potential winner may be required, in Sponsor’s sole discretion, to complete and return an Affidavit of Eligibility & Liability/Publicity Release and a scan or photo of legal ID and also to have any companion(s) who will participate in the prize activities, if applicable, return the same documentation before claiming the prize or being allowed to participate in any prize activities. If any of the potential companion(s), if applicable, is under the age of majority in his or her state of residence, then the parent or legal guardian of the minor potential companion(s) must sign and return all required forms. All forms must be postmarked within 10 days of the date on notification materials if return is requested via mail or forms must be completed before receipt of any prize if prizes are picked up in person. Decisions of Sponsor are final on all matters.

Federal, state, and local taxes on prizes, if any, and any other costs, fees and expenses not listed above as specifically included as part of the prize are the sole responsibility of winner. An IRS form 1099 and other tax-related forms and documents may be issued by Sponsor if required by law.

PUBLICITY AND MARKETING: Submission of a Nomination in the Contest constitutes permission to the Sponsor to use Entrant’s name, identity, title, likeness, distinctive appearance, physical likeness, image, portrait, picture, photograph (whether still or moving), screen persona, voice, vocal style, statements, gesture, mannerism, personality, performance characteristic, biographical data, signature, social media handles and identities, and any other indicia or imitation of identity or likeness for purposes of advertising and trade in connection with the Contest, in any medium, without further notice, approval, or compensation, unless prohibited by law.

LIABILITY RELEASE & INDEMNIFICATION: By entering this Contest, Entrants agree to release, discharge and hold harmless Sponsor, Sponsor Affiliates and their respective parents, affiliates, and subsidiaries and all of their directors, officers, employees, agents and assigns (the “Released Parties”) from any claims, losses, and damages arising out of, or relating to, Entrant’s participation in this Contest or any Contest-related activities (including, without limitation, any event attended as part of a prize) and the acceptance and use, misuse, or possession of any prize awarded hereunder (including, without limitation, any misrepresentation made by the Entrant in connection with the Contest; any non-compliance by the Entrant with these Official Rules; claims brought by persons or entities other than the parties to these Official Rules arising from or related to the Entrant’s involvement with the Contest; acceptance, possession, misuse or use of any prize or participation in any Contest-related activity or participation in this Contest; any malfunction, error or other problem arising in connection with the collection, processing, or retention of entry information; or any typographical or other error in the printing, offering or announcement of any prize or winner). The foregoing includes, without limitation, any claim for personal injury, property loss or damage, or death arising in any way in connection with the Contest.

OTHER TERMS: Sponsor not responsible for any typographical or other error in the printing, the offering or the announcement of any prize or in the administration of the Contest, whether caused by computer, technical or human error. Sponsor is not responsible for late, lost, damaged, incomplete, illegible, faulty, or incorrect transmissions, incorrect announcements of any kind, technical hardware or software failures of any kind, any damage to any person’s computer related to or resulting from participating in the online portion of the promotion, lost or unavailable network connections, or failed, incomplete, garbled or delayed computer transmission that may limit a user’s ability to participate in the Contest whether caused by computer, technical or human error. Sponsor reserves the right to terminate or modify the Contest or any portion of it for any reason, including but not limited to, if fraud, misconduct or technical failures destroy the integrity of the Contest; or if a computer virus, bug, wireless failure, or other technical problem corrupts the administration, security, or proper administration of the Contest as determined by Sponsor, in its sole discretion. If Sponsor terminates the Contest, Sponsor will determine the winners for all remaining prizes by applying the criteria set forth above to all eligible, non-suspect Nominations received as of the termination date and will post notice of its action on the Contest website. Sponsor reserves the right to disqualify any individual from further participation in the Contest if Sponsor concludes, in its sole discretion, that such person: (a) has attempted to tamper with the Nomination process or other operation of the Contest; (b) has disregarded or has attempted to circumvent these Official Rules; (c) has committed fraud or attempted to undermine the legitimate operation of the Contest; or (d) has acted toward Sponsor, any Sponsor Affiliates, or any other Entrant or Veteran in an unfair,

GOVERNING LAW & JURISDICTION: EXCEPT WHERE PROHIBITED, ENTRANTS AGREE THAT ANY AND ALL DISPUTES, CLAIMS AND CAUSES OF ACTION ARISING OUT OF OR CONNECTED WITH THIS CONTEST, OR PRIZE AWARDED, WILL BE RESOLVED INDIVIDUALLY WITHOUT RESORT TO ANY FORM OF CLASS ACTION, AND ANY AND ALL CLAIMS, JUDGMENTS AND AWARDS WILL BE LIMITED TO ACTUAL OUT-OF-POCKET COSTS INCURRED BY ENTRANT WITH REGARD TO THIS CONTEST, BUT IN NO EVENT ATTORNEYS’ FEES, PUNITIVE, INCIDENTAL, CONSEQUENTIAL OR OTHER DAMAGES. All issues and questions concerning the construction, validity, interpretation and enforceability of these Official Rules, or the rights and obligations of Entrants and Sponsor in connection with the Contest will be governed by and construed in accordance with the laws of the State of Ohio, without giving effect to any choice of law or conflict of law rules or provisions (whether of Ohio or any other jurisdiction) that would cause the application of the laws of any jurisdiction other than Ohio. The state and federal courts located in Hamilton County, Ohio will be the exclusive forum for any dispute relating to these Official Rules and/or this Contest. All participants and winners agree, by their participation in the Contest, to submit to the personal jurisdiction of the state and federal courts in Hamilton County, Ohio and waive the right to contest jurisdiction.

SEVERABILITY: If any provision(s) of these Official Rules are held to be invalid or unenforceable, all remaining provisions hereof will remain in full force and effect.

VISA® is a registered trademark of Visa, Inc. Visa, Inc. is not a sponsor of or affiliated with this promotion.