MLS deputy commissioner: Trip to Valley 'has given us a lot to think about' 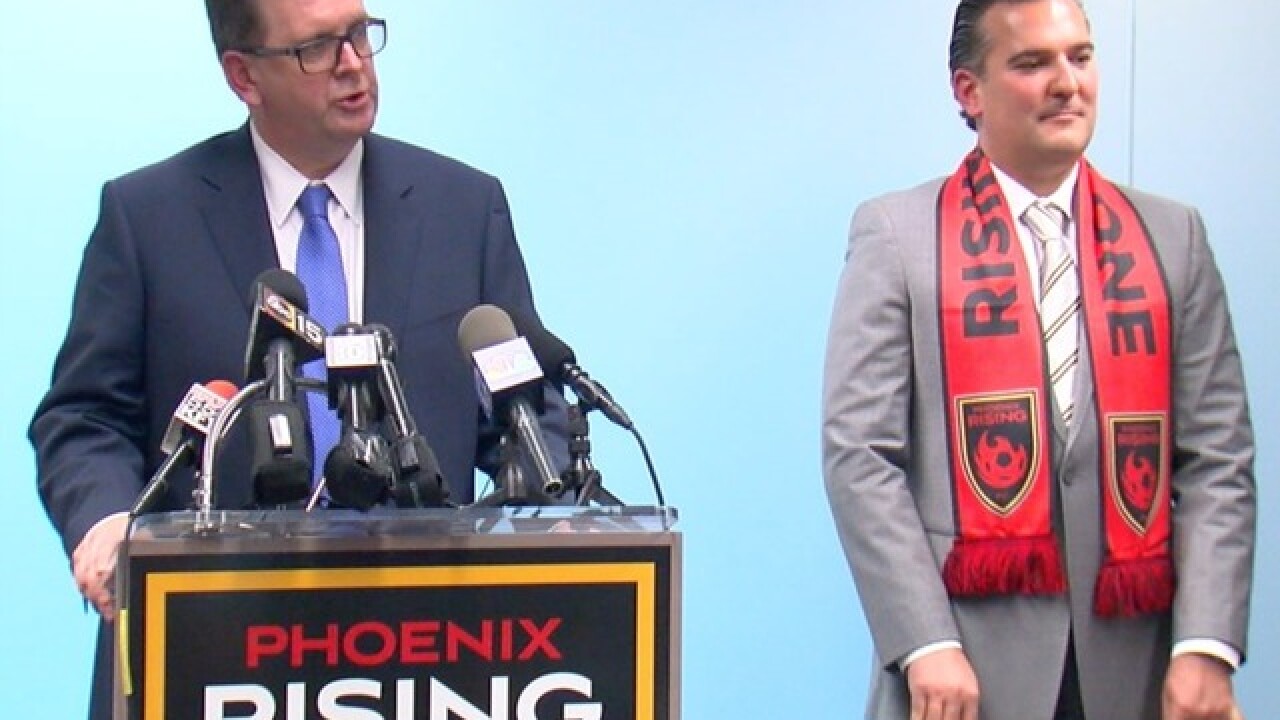 After listening to Major League Soccer president and deputy commissioner Mark Abbott on Tuesday, one can't help but think that Phoenix Rising FC may have inched a bit closer to bringing an MLS franchise to the Valley.

Abbott and other MLS executives met with officials from Phoenix Rising Football Club and local Valley leaders to tour Phoenix Rising's stadium in Scottsdale and discuss the team's bid to bring an expansion MLS team to Arizona.

"There's no substitute for coming out and really seeing the passion in a community, and I felt that very greatly, from the first meeting I had this morning to the outpouring of support that we have here this afternoon," Abbott said following his visit Tuesday. "It's really been a wonderful day and one that has given us to lot to think about."

Some solid numbers presented by @PHXRisingFC to help bolster their bid for an expansion @MLS club. pic.twitter.com/UWdACvRhck

But Abbott said numbers only tell part of the story, which is why his visit to the Valley was crucial as MLS continues to gather information before deciding which clubs will be awarded expansion franchises.

"You can read statistics, you can look at articles and all that, and that gives you a sense of a market, but when you meet with people here, particularly people in positions of leadership, and you hear how excited they are about what's happening with Phoenix Rising, how interested they are to see what they can do to support an effort to bring an MLS team, that's only something you can do in person," he said.

"I came away with that strong feeling today, and I came away with a deeper understanding of the ownership group to what they're trying to do, not just with Major League Soccer but with their team that's here now."

In August, the soccer club formerly known as AZ United was sold to an investment group led by Kona Grill CEO Berke Bakay. Several weeks later, the team was rebranded as Phoenix Rising FC, and the franchise announced its intention to move its home games from Peoria to the East Valley.

Abbott said he was impressed with Phoenix Rising's ability to sell out each of its first four home games at its new 6,200-seat venue off McClintock Road and Loop 202 in Scottsdale. He's also encouraged by the proposed location of what would be a privately-funded 20,000-plus-seat MLS-sized stadium on a 45-acre piece of land at the Salt River Pima-Maricopa Indian Community.

Phoenix Rising says it can begin construction on the stadium as soon as it gets the green light to do so.

"Given its proximity to the 101 and the 202, proximity to ASU, some discussions about what's happening with public transportation -- maybe not directly to that site, but other ideas -- it strikes me as an excellent site," Abbott said.

"That's something that we're going to dig in more and learn more about as we go through the process, but on an initial take, it seems well served by a variety of transportation hubs, and I think that makes a lot of sense to me."

Abbott said MLS is early in the process of evaluating all 12 expansion applications. MLS wants to add six teams by 2022, starting with a pair of teams in 2020.

Abbott said MLS expects to announce the recipients of both 2020 franchises by the end of this year.

"I'm not here to compare it to any other bid; I'm here to say that it is a bid that I take seriously, that we take seriously, and that we continue to want to work with this group on," he said.

Along with the stadium, Phoenix Rising has demonstrated its seriousness in adding an MLS team with some major signings, including Mexican soccer star Omar Bravo, and former Chelsea FC standouts Shaun Wright-Phillips and Didier Drogba -- the latter of whom has also become a co-owner of the team.

"I have to say that Phoenix won my heart."@PHXRisingFC's @didierdrogba explains his passion for bringing an @MLS club to the Valley. pic.twitter.com/JJdj7oCagA

"The idea of bringing the (MLS) level of soccer to Phoenix is why I made the decision to join the club, to join Phoenix Rising," Drogba said Tuesday. "After looking at all the possibilities I had, all the offers I had all around the world, I have to say that Phoenix won my heart, the project won my heart, and I'm very interested in the expansion of this sport in North America and the world."

"To see him and his commitment to what he wants to do and help in Phoenix is really heartening and I think should be a great vote of confidence for people in this community, that he has chosen to spend his time and energy and focus here," he said.

When all was said and done, Abbott came away from his visit with a better picture of what Major League Soccer would look like in the Valley -- and by all accounts, Phoenix Rising only helped its chances of making that picture a reality.

"One of the really strong takeaways I had from today was the unbelievable progress that has been made by Phoenix Rising in building a fan base in a short period of time," Abbott said. "This is a very committed group who is pursuing this with seriousness and energy and sense of purpose, and a real grounded view of what needs to be done."