Captain Coyote finally got his due 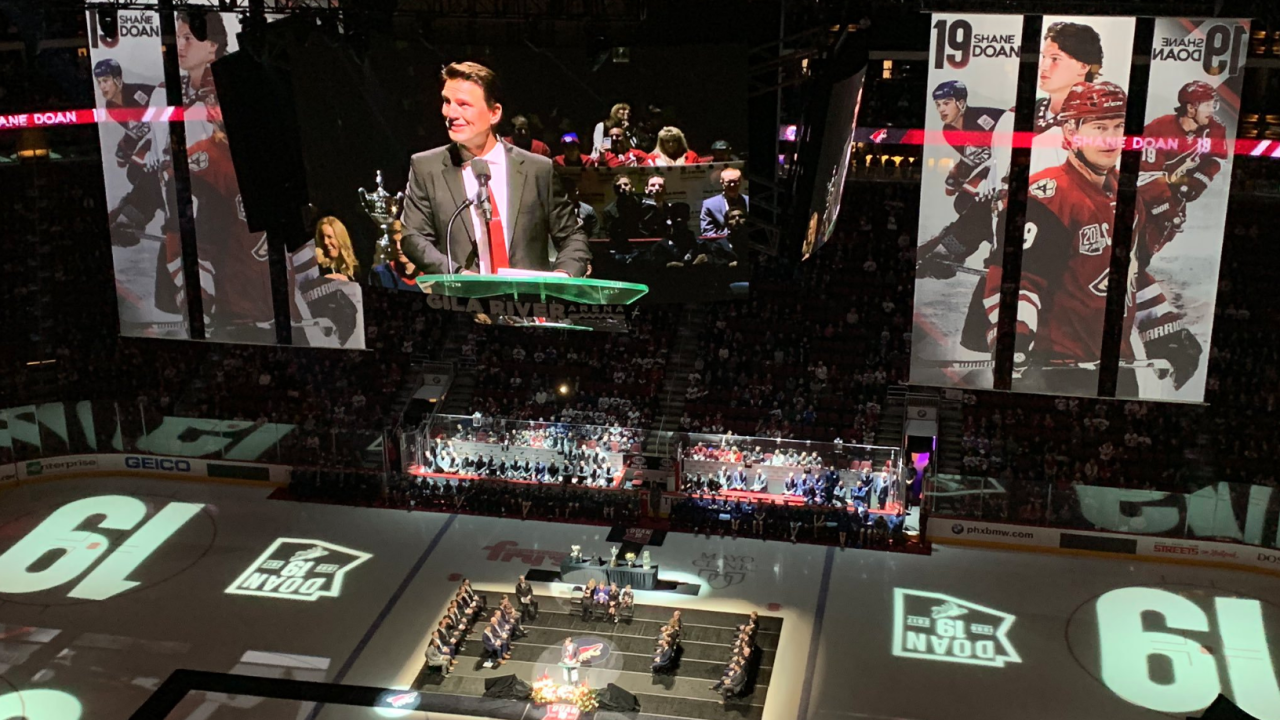 GLENDALE — After 21 years of service to the Arizona Coyotes organization, Shane Doan received the recognition he deserved from teammates, family, friends and Coyotes fans during his jersey retirement ceremony before the Yotes' game vs. the Winnipeg Jets at Gila River Arena on Sunday night.

You can watch the entire 90-minute ceremony here.

Doan's wife and three of his four children were in attendance -- and his oldest daughter Gracie, who was performing a play at her university Sunday night, introduced her father via video message, making Doan extra emotional before he stood up to address the fans who gave him the kind of thunderous applause usually reserved for Coyotes playoff games.

After Doan addressed the fans, the Coyotes presented him with a custom golf cart and Harley Davidson motorcycle. Doan's No. 19 was then raised to the rafters.

As for the game: The Coyotes took care of business, beating the Jets 4-1 for their third straight victory to remain close in the chase for a Western Conference playoff spot. 2019 All-Star Game selection Clayton Keller, who wasn't alive when Doan began his NHL career, scored a beauty of a goal for the Yotes in the second period.

A two-time NHL All-Star selection, the 42-year-old Doan played for the Coyotes before they were the Coyotes, as he was selected by the then-Winnipeg Jets with the seventh overall pick in the 1995 NHL Draft. The franchise relocated to Arizona before the 1996-97 season.

Doan served as Coyotes captain in his final 13 seasons with the team and is the Coyotes' all-time leader in games played, goals, assists, points, power-play goals and game-winning goals.

This is really all you need to know about Shane Doan, courtesy of @ArizonaCoyotes president and CEO @ahronCo21. #ThankYouDoan pic.twitter.com/wEGxiKicpY

Gifts would never be enough to show our gratitude, but we tried. #ThankYouDoan pic.twitter.com/msk2fvl9Dl

"My emotions are all over the map."@ArizonaCoyotes legend Shane Doan tried to put into words what tonight's jersey retirement ceremony meant to him. pic.twitter.com/z8iiz3soHh