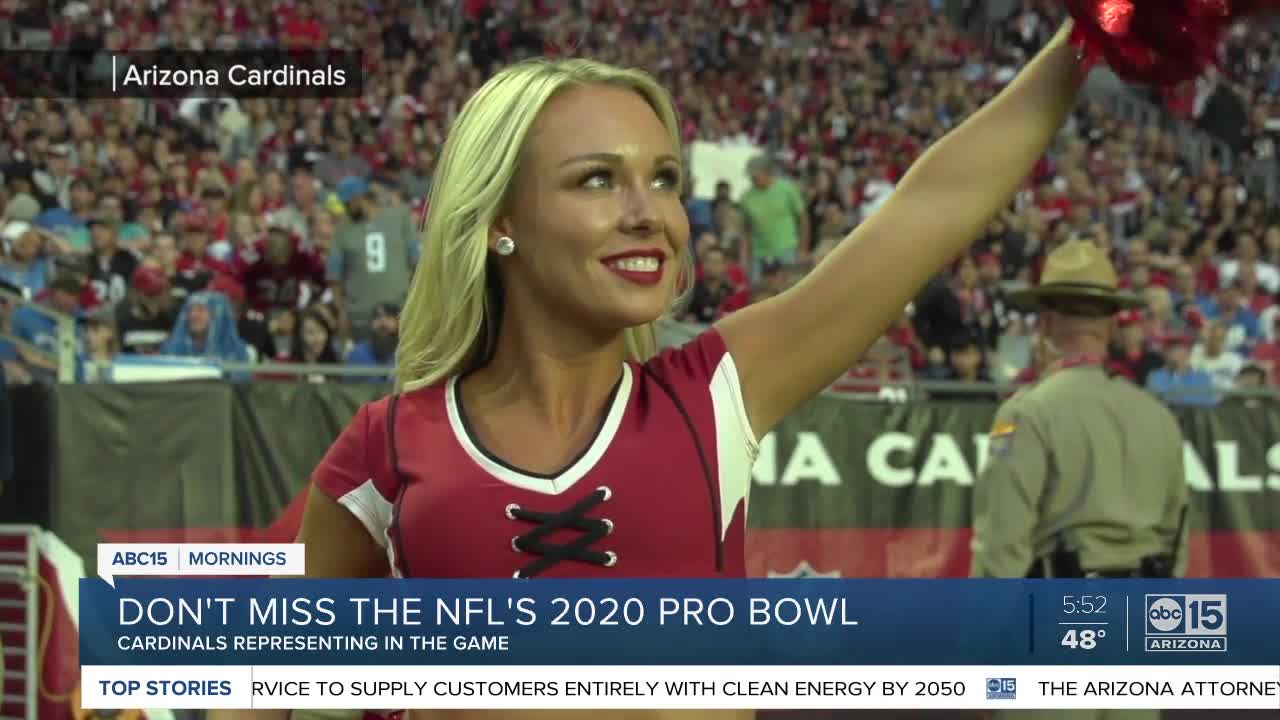 The Red Sea is happy to see that Chandler Jones is going for his third time, and Budda Baker will make his second appearance. We're also excited for Davis, your 2020 Pro Bowl Cheerleader for the Arizona Cardinals! 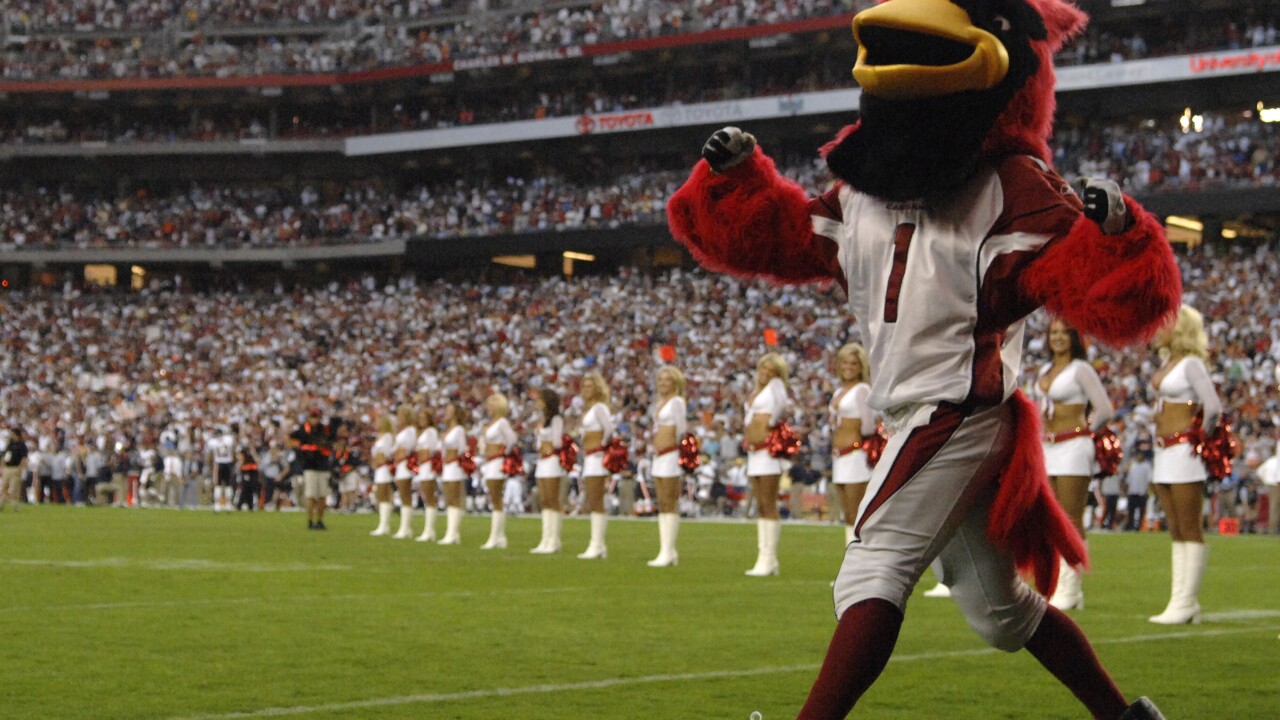 The Red Sea is happy to see that Chandler Jones is going for his third time, and Budda Baker will make his second appearance. We're also excited for Davis, your 2020 Pro Bowl Cheerleader for the Arizona Cardinals!

Did you know that a cheerleader can only be selected once per team in the NFL? In fact, some women may cheer for years, and never be selected to go. It's a massive honor.

Davis started dancing when she was three years old, grew up dancing and competing, and went on to make the University of Arizona's Pom Line. Then, she became a professional in the NFL, cheering for our Arizona Cardinals!

Davis told us that she loves the rush of performing, and actually enjoys making eye contact with the fans while she is out on the field. She's engaging and her infectious energy draws you in.

Arizona Cardinals Cheerleaders are required to either be full-time students or have full-time jobs. Davis works full-time with a tech company, helping with digital marketing. Then, she steps into her role as a professional dancer on the field, doing her favorite style of dance: jazz mixed with NFL.

She has two older sisters who happen to be pros themselves, outside of the dance world. One was drafted into the National Women's Soccer League and still is a professional soccer player, and her oldest sister works at a country club here in town as a golf professional.

Davis laughed and said, "Just trying to fill their shoes a little bit."

Davis is wrapping up her third year on the team and shared that she is grateful that her teammates voted her to be a captain. She enjoyed developing her leadership style this past year and having the team's trust in making this season memorable.

She told us she owes it all to her dad. He encouraged her to take a prep class before auditions three years ago. Afterward, Davis told him that she enjoyed it, and he took that as a green light. Her dad filled out her audition application for the Arizona Cardinals three years ago without her knowing!

"The next day, I get an email confirmation of my audition application...all filled out and ready to go." She laughed again, and her eyes glistened as she said, "Thank God he did that for me because I would not be here. I know that for sure!"

When she made the team, she was finishing up her collegiate days at the University of Arizona, and commuting from Tucson to practice each week, along with starting her career. Though it was overwhelming at first, she quickly adjusted and is so grateful. She told me that she thinks her dad is vicariously living through her experiences since the Arizona Cardinals have been his team, "since day one." Her parents never miss a game.

Her dad taught her confidence, and her mom taught her strength. Throughout the season, there are themed games for causes like military appreciation, or for holidays. Crucial Catch happens to be extra special to Davis because her mom is a breast cancer survivor, and survivors get to take the field with the cheerleaders during one game. Davis shared, "We convinced her to do it, and she did the halftime with me and my dad. It was the most fun, and they did it the next year following that. It's their favorite thing to do each season. So, I love it! It's my favorite thing too!"

Davis also loves Paw Express, where she, her teammates and the players deliver teddy bears to the patients at Phoenix Children's. This past season, she also got to perform with New Kids on the Block at their concert, Brett Michaels, among other artists, and danced to the Ghostbusters soundtrack. Davis also appeared in a commercial, and she told us she embraces every memory because she may never get to experience them again.

There's another unforgettable memory to add to the list. All of the cheerleaders were given ballots to vote for a veteran to send to the 2020 Pro Bowl. Those sheets were then tallied, and the announcement was to follow. It was the Steelers game, third-quarter break, right after they had just danced a routine in the south end zone. Then, she heard the announcement. Her name was called!

"My teammates just slammed into me giving me hugs and cheering for me... I would like to think I'm not much of an emotional person. I cried like immediately," Davis said as she glanced away almost to relive that moment. "Running around the stadium with that sash on was so cool. All of the fans were cheering for me, saying my name, that would have never known my name before. It was something else," Davis said. It truly is an honor to be selected as one of the best of the best in the NFL, especially knowing your team voted for you to represent not just the Arizona Cardinals, but also the state of Arizona.

Surprisingly, Davis shared that she is working on being more outgoing. She said, "I can dance in front of millions of people. It's my favorite thing to do. The second you ask me to say, 'Hi, my name is Davis', I might faint." She laughed, and I assured her that public speaking on any level can be intimidating. Others may think opposite, that it's easier to speak in front a room, rather than dance in front of a room, or stadium for that matter. So, Davis, know we all admire your strengths, and you're very well spoken!

After she was selected, she joined an app to chat with all of the other women from the other teams. She was required to watch videos and learn nine routines before arrival. Davis was also sent a vague schedule that shows they will have multiple days of practices, appearances and performances. It initially stressed her out not having a detailed play-by-play of what to expect each day, but her excitement took over. She's there now, and has gained an entirely new sisterhood across the league.

We will be eager to hear about her experience, and can update this article once Davis is back. She just kept telling us how grateful she is.

"This is not something I would have pictured for me this year. So, it was very shocking and very exciting," Davis said. Well, know you deserve it, and the Red Sea is cheering you on!

She had one last thing to say. Davis addressed the camera and said, "Thanks, Dad!" Then Big Red scooped her up and gave her a big hug. She giggled and said, "I love you too, Big Red."

I was the 2014 Pro Bowl Cheerleader, so I have one last thing to say to Davis: Welcome to the family!