The former ASU star could be a first-round pick 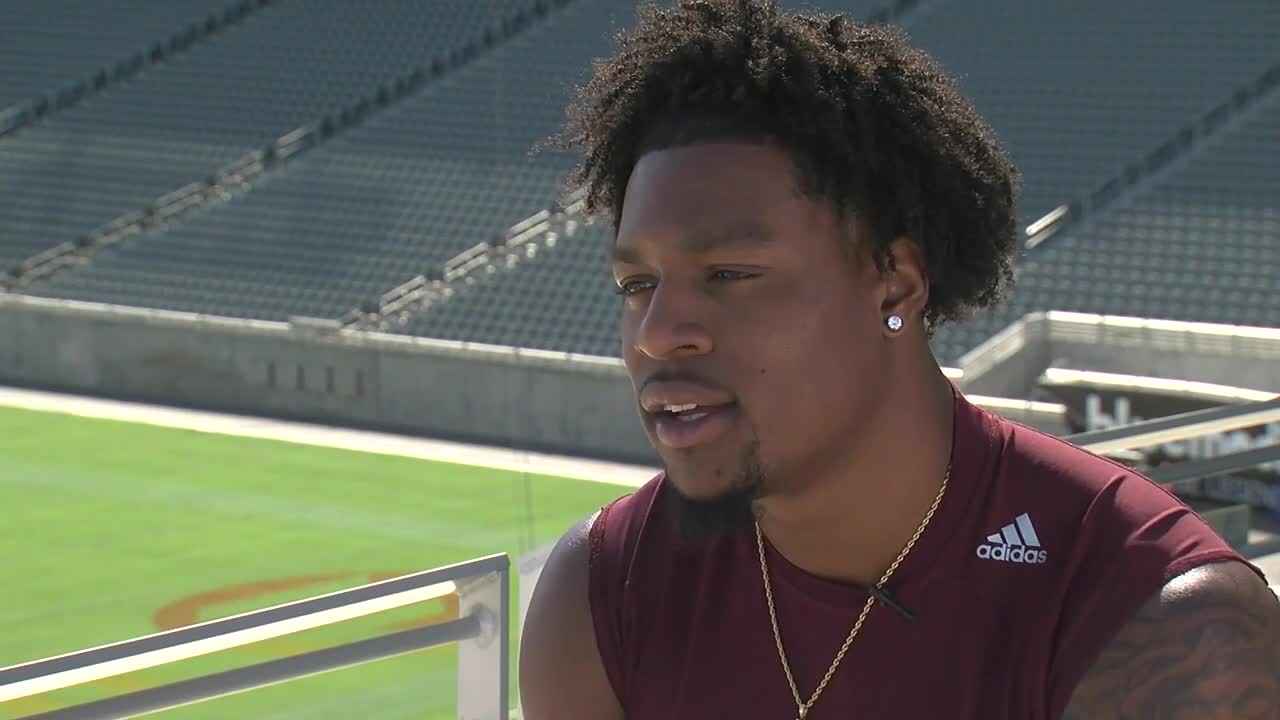 It's been N'Keal Harry's longtime dream to be selected in the first round of the NFL Draft. 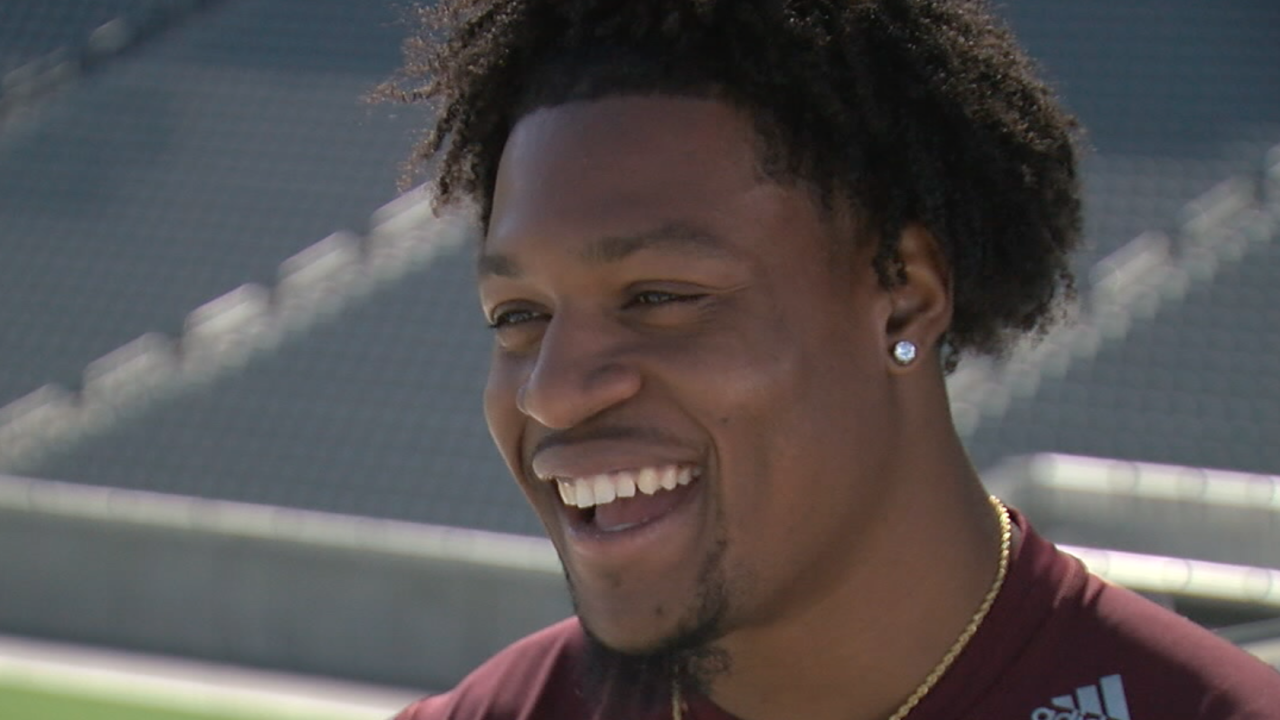 N'Keal Harry is one of the best NFL prospects to come out of ASU, as well as the entire state, in recent memory.

The wide receiver played at Chandler High School before starring as a Sun Devil for three seasons. In November, he declared for the 2019 NFL Draft, and he's expected to be a first- or second-round pick.

Before his pro day at ASU, Jason Snavely spoke to Harry to discuss his performance at the NFL Combine, his time at ASU and Chandler High, his close relationship with his grandmother, his relationship with girlfriend and ASU basketball star Kianna Ibis, and how his faith continues to guide him on his journey.

It’s been great, just knowing all my hard work has finally gotten me to this point. I’ve been waiting on this my whole life, so as this process has gone by, I’ve really just been enjoying every moment of it.

Do you follow all the talk -- the projections, the mock drafts?

It’s hard not to see it, just because there are so many people tagging me (on social media) and everything. But I just try not to pay attention to it too much. The draft is a crazy thing. Anything can happen. So right now, I’m just doing what I can do, performing at the combine and pro day (at ASU), and just leaving the rest up to God.

How do you tune out all of the noise?

I just really focus on everything I really need to be focusing on, as far as my on-field technique and just making sure I’m dialed in and ready for things like pro day. I just kind of get in my zone and just make sure I’m mentally prepared for everything coming my way.

Are you a gamer?

I’m a gamer, yeah. I play a lot of video games. That’s how I pass the time most of the time.

It would have to be between 2K and Madden.

So even in your relaxing time, it involves competition?

(Laughs) Yeah, everything is competition with me.

Everyone in this state would love to see you in an Arizona Cardinals jersey. Would you like to see that, too?

It would be extremely special, especially because when I came to ASU, I had so many people I grew up with still follow me. So, if I were to be able to play for the Cardinals, it would be a really special moment for me.

Your grandma would love that, wouldn’t she?

Yeah. She would get to stay in her little house and relax. It’d be good.

Your grandma has become as big a star as you, hasn’t she?

(Laughs) Yeah, you know, it’s been a lot of people stopping her when she’s out and about. She tries to stay low-key as much as she can. But she’s ready for it.

What does she have to say about all this new attention she’s getting?

Yeah, it’s extremely new to her. She always says, "N’Keal, what did you get me into?'"She tells me that on the regular. But, you know, it’s just something that comes with it.

Has she offered you any words of wisdom throughout this process?

For her, she just wants to see me become a great man. This football stuff, she has faith in me and she’s always praying that it goes well. But at the end of the day, she raised me to be a humble man. She raised me to be a respectful man. So, that’s the biggest thing for her. That’s really her words of wisdom, just making sure I don’t lose my way and making sure that I remember how I was brought up at all times.

Yes, sir -- the person. The person that I’m becoming.

When you do get drafted, what will be your first big purchase with that first paycheck?

Does she know that?

Yeah, she does know that. She’s the type of person -- she’s always told me she doesn’t want anything for me. But, you know, I’ve got to spoil her. She’s been looking out for me for all these years, so it’s my turn to return the favor.

Who’s the better athlete: You or Kianna?

Who’s the better athlete? Let me be careful with this one. I’d give it like a 50/50, just because I see how hard she works. I see how much she puts into this. I see us at the same level at this point.

Be honest: Can you take her one on one in basketball?

What was your reaction when Kianna and the ASU women’s basketball team reached the Sweet 16 for the first time since 2015?

I was on the couch. I was sweating. I was nervous. My heart was racing a million miles an hour. Of course, she was playing defense on the girl who put the last shot up, so when I saw that it didn’t fall, I was extremely happy. I was happy not only for her, but for the whole program, all the coaches. I know how much they put into this, so I’m extremely excited for them.

Check out the final seconds of @SunDevilWBB’s win over Miami to advance to the Sweet Sixteen! pic.twitter.com/7b2xgakmA5

Who’s getting drafted higher: You or Kianna?

(Laughs) Only time will tell.

Are you and Kianna pretty competitive?

Is she better at any game than you?

Video games, I take that. I claim that, for sure.

It sounds like you’re claiming everything! Is there anything she’s better at?

I give her the drive. The drive she has, the passion she has. We’re about on the same level with that.

.@SunDevilWBB forward @kianna_ibis on what it'll take to get to the Final Four, and how @NkealHarry15 has supported her through her team's NCAA Tournament run. pic.twitter.com/1VlSNHs7hp

Let’s talk about the NFL Combine. A lot was riding on your speed, but you silenced a lot of the critics with your 4.5-second 40-yard dash time. Was that what you were hoping for?

It was in that ballpark for me. Whenever I compete, I try to nitpick things and find what I could have done better. I wasn’t 100 percent satisfied with the results, but I can live with it. I did silence a lot of those critics, so it was a pretty successful day overall.

You did 27 bench reps, tied for the most among any wide receiver at the Combine. Had you done that before, or was it just a bunch of adrenaline?

The most I had done before was 25, but I knew once I got on the stage and the adrenaline was flowing, I knew I could do more than that.

A little bit. I feel like I had one or two more in me. But that’s just the competitor in me.

How much of your success do you attribute to your mental preparation?

A lot of it. I try to just stay calm, stay relaxed. I get ready for games and moments like that with practice, because once you get into a game, it’s second nature at that point. You’re going to do whatever you’re used to doing. So, I try to prepare myself in practice and in preparation, training, just to make sure it’s second nature when big moments come around.

Walk us through that mental prep. What does that look like?

I just try to relax, listen to some music. I try not to get too amped up. Especially during the season when it’s game day, on the way to the bus, I’ll just be in my zone listening to music. I’ll be pretty calm. And once we come out the tunnel, the switch flips.

Is there any visualization involved?

What’s the more intense rivalry: Chandler vs. Hamilton, or ASU vs. UA?

What will you remember most from your time at Chandler High?

Just the people. All the people that never gave up on me, always had faith in me. It goes a long way in my book — people that stick around and just trusted me, had faith in me. And it was the same case with ASU. There were so many people around here that kept my head high. Even when I was going through some things, they always stuck by my side. So, I’m very appreciative for that people that have been put in my life.

What are your plans for draft day?

I’m not too sure yet. I’m still trying to get my whole family out here from the Caribbean. We’re trying to see if that can happen. But if not, I'll maybe go to the draft. It’s still up in the air right now for me.

Have any other past teammates or ASU alums called you to tell you what to expect with the draft?

I've talked to (former ASU wide receiver) Jaelen Strong frequently about this whole process, just because he’s been through it. He’s just given me a lot of wisdom and just told me to be aware of things and just stay on my toes.

Do you care where you go in the draft?

I honestly don’t care where I go. The goal for me ever since I was a little kid is to be a first-round draft pick, so that’s my goal. Whether it happens or not, I’ll still have faith. I know I’ll end up wherever God wants me. I’m just walking in the footsteps right now. I’m just following the path that I believe was set for me.

Your goal of becoming a first-round pick — when was that ignited for you?

Whenever I was old enough to think for myself and make high-quality decisions, that’s when I decided I know I can do this. I’ve always felt in my heart that I was meant for this. So, whether it happens or not is not up to me; it’s up to the decision makers. All I can control is once I get to the NFL. I know my work ethic and I know I won’t allow myself to be anything other than great. I just feel like mediocre is not in my future, and I won’t let it (be).

How do you visualize draft day going? Are you going to be nervous or calm?

I’ll probably be nervous. It’s hard to tell, especially once that day comes. I probably won’t know the type of emotions that I’ll have until I get there. But I’ll definitely be nervous, just wondering where I’m going to go and where I’ll end up. But like I said, I’m just putting it in the hands of God and just following my path that’s been set for me.