A business owner in Black Canyon City hopes the potential widening of I-17 will alleviate crashes and congestion in the area.

He has a front row seat to a notorious stretch of Interstate 17 known for long backups and now, he is anxious for improvements to come to that stretch of highway that runs through Black Canyon City.

Perry is looking forward to the potential widening of I-17 between Anthem and Sunset Point. Under the Arizona Department of Transportation's current five-year program, plans are in the works to widen this stretch of I-17 with construction on the project possible by 2021.

The funding for the project would come from both ADOT and the Maricopa Association of Governments. It is estimated at a total cost of $178 Million.

It is one of dozens of improvement projects in the queue across Arizona.

"Every project that we do has a safety component to it," said Eric Anderson, the executive director of Maricopa Association of Governments.

Anderson told ABC15 funding for improvement projects within Maricopa County is in pretty good shape, thanks to the half-cent sales tax voters approved extension of as part of Prop 400 in 2004 to help fund transportation projects.

"We can actually make significant improvements in our transportation system," Anderson said. "Outside of Maricopa County where funding isn't quite as great, there's really limited resources to do the kind of expansion that we need to have statewide."

As part of the 2040 Regional Transportation Plan, the half-cent sales tax could add $9.6 billion in funding. As part of that plan, improvement projects are proposed, and planned, in three phases. 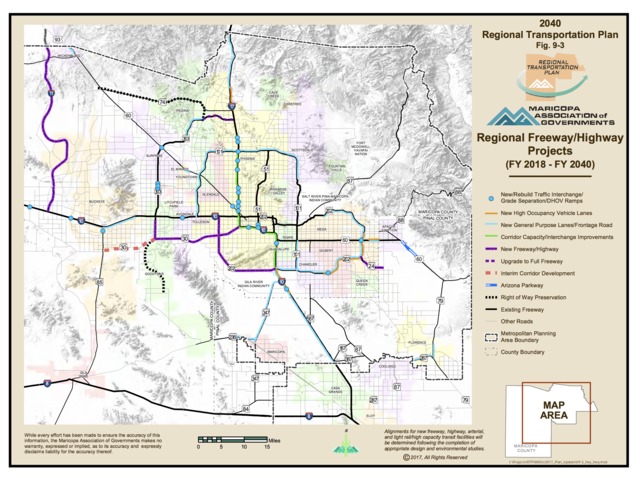 Another project in the queue includes improvements to parts of I-17 in Phoenix. Have you ever noticed the lanes seem narrower? Parts of the I-17 have lanes that are 11 feet wide, not 12 feet like most other highways.

"Parts of I-17 are substandard, they don't meet current design standards," Anderson said. "That was an older facility, there wasn't much right-of-way. But now, we can come back and build it to...current design standards. Parts of I-17 were built in the late '50s. Obviously, we know a lot more about designing highways today than we did back in 1958."

You can find a list of planned transportation projects within Maricopa County HERE as part of the 2040 Regional Transportation Plan.

Perry is among those anxious to see highway improvements. In his case, he believes the widening of part of I-17 will alleviate congestion, and reduce crashes, through Black Canyon City.

"It's needed immediately," he said. "We really need something as soon as possible."