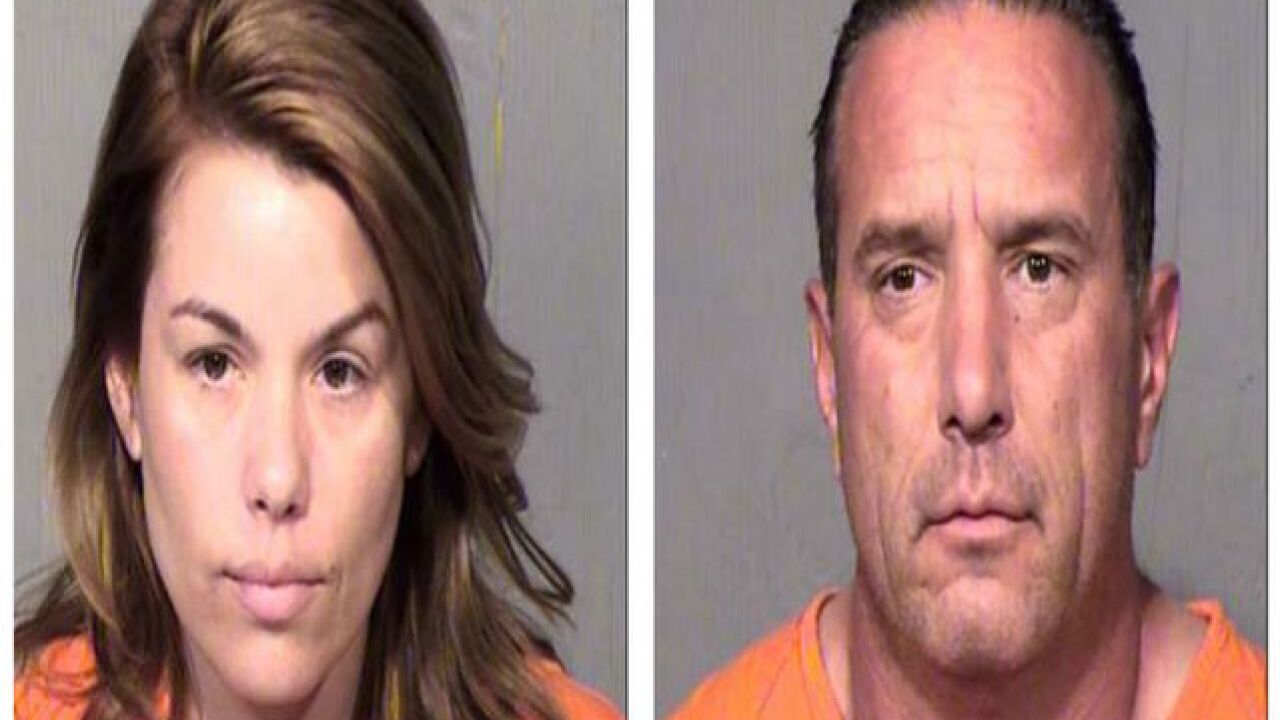 An Arizona Department of Economic Security employee and a Phoenix police officer were arrested Wednesday on suspicion of theft, fraud and money laundering.

According to the Arizona Department of Public Safety, DES alerted them to possible theft involving 39-year-old Autumn Vasquez Maya.

DPS launched an investigation and tracked several other criminal activities, including more than $3,000 in currency, firearms and police body cameras that had been stolen.

DPS says Maya is suspected of pawning the items at Valley pawn shops.

According to court paperwork, on Nov. 28, 2017, it was discovered $3,488 was missing from a safe at the DES offices. The money was initially placed in an envelope but had been replaced with white copy paper cut into the size of bills.

During the investigation, it was discovered Maya had access to the safe and periodically conducted audits of the firearms in the safe, court documents stated.

On March 12, Maya was interviewed by officials, court documents said. She became “extremely defensive” and denied touching the inside of the envelope — despite her fingerprints being found on tape sealing the envelope.

After Maya was identified as a primary suspect in the case, a records check was completed for further review. During the formal workup, it was discovered Maya had several recent transactions at Valley pawn shops, court paperwork said.

On March 22, authorities visited a pawn shop in Scottsdale that Maya frequented and spoke with the general manager, court documents said. The manager explained that he recalled seeing Maya and a man later identified as her husband come into the store that same morning to pawn another item and remove a firearm.

Maya had been employed with DES since 2016.

While working at the AAG’s office, $2,000 went missing from a safe and it's believed she pawned an AAG-owned weapon.

Maya's husband Michael, a Phoenix police officer, was also arrested as a co-conspirator.

"It was pretty shocking what happened. Police came out in their tactical gear. There were about 10 vehicles that came up, and they were banging on the door. You could hear them yelling open up, police, open up," said Rhowen Mendoza, Maya's neighbor. "I mean you never know what people are capable of."

However, because Michael had been identified by employees of several pawn shops on various occasions, investigators say they believe he was, “actively participating in the ongoing conspiracy to traffic stolen state property.”

A Phoenix police spokesperson said they have begun the procedures to terminate his employment. Phoenix Police said he has been with their department for 24 years.

Both were released on bond and will return to court on April 19.