No, aliens have not invaded downtown Mesa. Well, maybe they have.

They are part of Fantastic Planet, a temporary art exhibit by Australian artist Amanda Parer, and will be on display from May 4-13.

"These giants from afar will give audiences the impression that they have just landed and are quietly and gently exploring our 'fantastic planet'," Parer said in a written statement.

The sculptures have been placed at a handful of attractions in Mesa, including the Mesa Arts Center, i.d.e.a. Museum and Federal Building.

Where to find them:

Casey Blake, spokeswoman for Mesa Arts Center, said in an email that one of the center's curators liked Parer's work and invited her to showcase it here in Arizona, where it is making its United States debut.

"This is an incredible opportunity to continue to build on the momentum in Downtown Mesa, where creative place-making is utilized as a tool to celebrate the creativity of Mesa’s residents and beyond," she said. 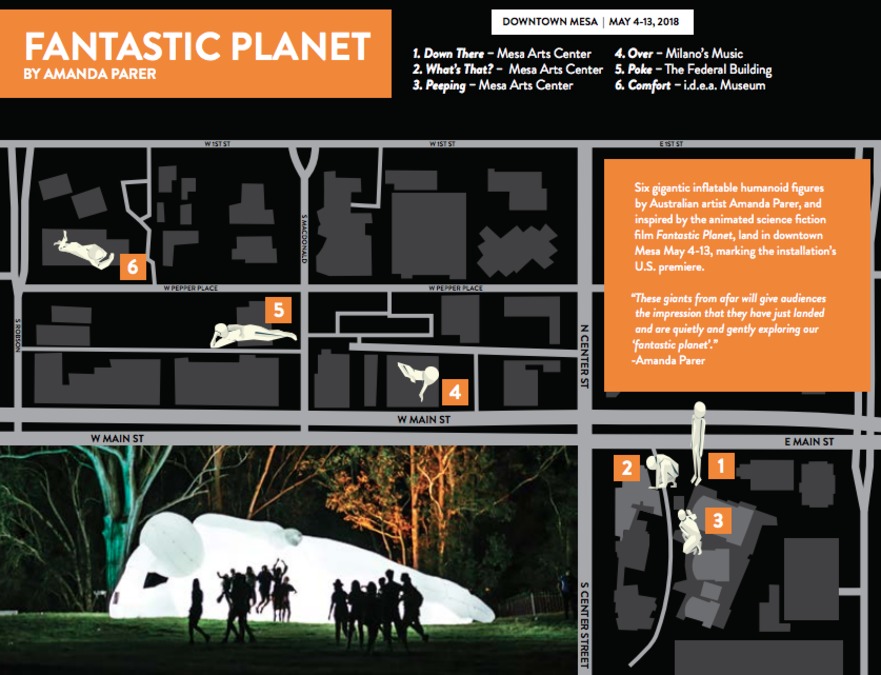 In March, the city launched "Hello, Lamp," a program where residents could text with inanimate objects, such as a light post or bench, in order to get feedback about the city in an entertaining way.

"Really the arts are a way to drive economic development.  For us, at least in my world, developers are choosing to come downtown because of the city support for the arts, the community support for arts," said Jeff McVay, manager of Downtown Transformation.

Resident Kathleen Shelton said "I get their emails and I said I just have to go down and look at this."

There is a community celebration tonight, Friday, May 4, from 6 p.m. - 10 p.m. on the North Patio of the Mesa Arts Center. There will be music and dance performances, and a screening of the 1973 film, Fantastic Planet.

Other community events have been scheduled during the exhibit's run: