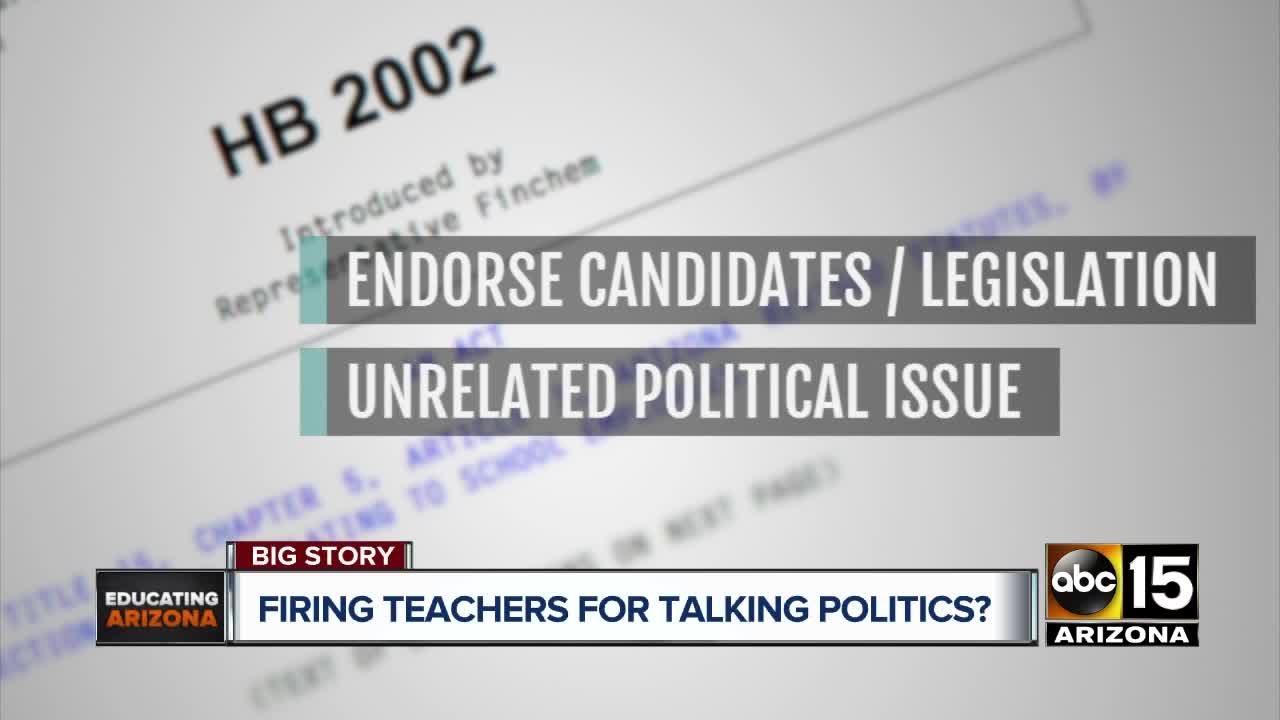 State Representative Mark Finchem is trying to ensure partisan politics are clearly prohibited from teachers in class. Proposed House Bill 2002 would "prohibit teachers in taxpayer-supported schools from engaging in political ideological or religious advocacy in the classrooms."

PHOENIX — Is it education or political indoctrination?

One Arizona lawmaker is trying to draw a very clear line with a new proposed house bill. Some educators are calling it retaliation against the "Red For Ed" movement, which boosted salaries and resources for educators earlier this year.

In 2018, teachers were visibly involved in politics with ballot initiatives and red T-shirts, but the educators insist it always stayed outside of the classroom.

"With Invest for Ed for example, we could not have anything like that in school," said Noah Karvelis, a Red For Ed organizer and elementary music teacher.

State Representative Mark Finchem is trying to ensure partisan politics are clearly prohibited from teachers in class. Proposed House Bill 2002 would "prohibit teachers in taxpayer-supported schools from engaging in political ideological or religious advocacy in the classrooms."

In a statement, Finchem said the bill is "a response to many calls from parents to end political activity in the classroom."

Educators say the bill is unnecessary and redundant, since it outlaws something that is already illegal and forbidden. State statute 15-511 states school employees "may not give pupils written materials to influence the outcome of an election or to advocate support for or opposition to pending or proposed legislation."

"It seems to be the same regulations that we have really always followed," Karvelis said. "We don’t have teachers who are in their pushing ideologies on students in the way that I think people maybe are imagining."

Karvelis said policies exist at the individual district level as well. The Arizona School Board Association has also put out a thorough list of "Do's and Don'ts."

'We all know that, we all understand that. We take that very seriously."

In the proposed bill, endorsing or opposing any candidates, legislation, executive action or court case is prohibited and considered a fireable offense. Also off limits is introducing into the classroom "any controversial issue that is not germane to the topic of the course or academic subject being taught."

It is unclear though, who would be in charge of deciding what is "germane." In the bill a "controversial issue" means an issue that is a point in a political party platform at the local, state or federal level.

"What is political? If the teacher talks about climate change now that’s politicized," wondered Tony Segreto, a Phoenix resident.

The big question unanswered in the bill, how would this be enforced?

"What are you going to do? Have a camera in every classroom to record what the teachers say? [Or have] a little kid in every room who is going to be the snitch?" asked Janet Miller.

All parties agree though, the classroom should be a place where kids hear differing viewpoints and learn to think for themselves.

"Part of the reason this country is great is by listening to all sides," said Ned Harris.