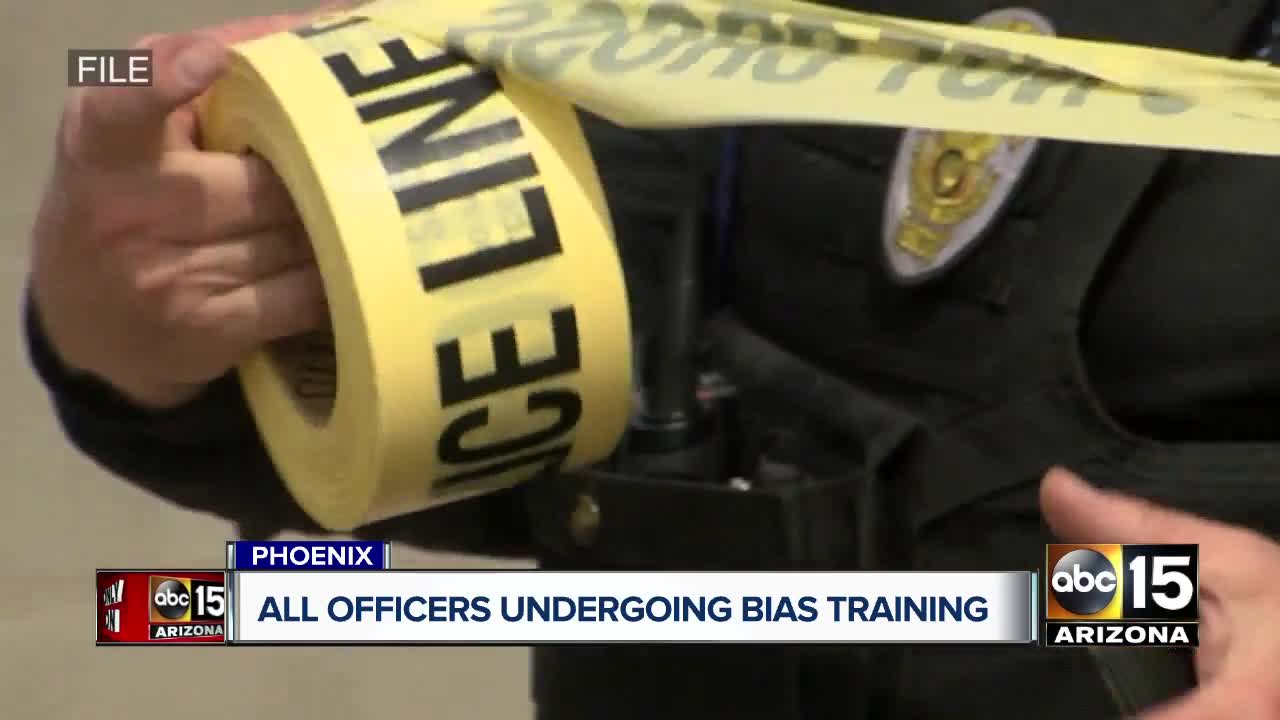 Training to make officers aware of the consequences of implicit bias.

The training has become increasingly popular among larger, urban departments and is considered by some to be a best practice.

"Basically all of us, by living in society and being overexposed to certain groups and certain traits, we form biases," said Dr. Bryant Marks, the man training every Phoenix police officer.

Dr. Marks is a social psychologist, college professor, and Founding Director with the National Training Institute on Race and Equity.

He says implicit bias is not a bad thing necessarily, but it can be if gone unchecked.

"It’s perfectly normal and natural, until it begins to systematically disadvantage another group. And that’s what we talk about in the trainings," he said.

The training, which takes seven hours for officers, has been given across the country. Dr. Marks, who was an appointee under President Obama, has trained more than 2,000 Police Chiefs and Executives at the White House. He has also provided training to all 10,000 officers with the Los Angeles Police Department and many others across the country.

"We are explaining what implicit bias is, what it looks like in the real world, the research, the background, the consequences."

Bias impacts everyone, but studies examining law enforcement, like the Oakland Police Department, show its importance in policing.

"They did find that African-Americans and Latinos were more likely to be stopped, searched, have their car searched, [and] have local detainment where they were put in handcuffs and [placed] on the curb," said Dr. Marks.

Phoenix police also cited the training as an effort to curb officer-involved shootings. In 2018 police shootings involving Phoenix police more than doubled from 21 to 44.

Dr. Marks says it is unclear what, if any, role implicit bias played in the 44 police shootings of 2018.

"Is it possible? Yes. Did it happen in these cases? It's hard to say."

Edward Brown was shot by a Phoenix police officer in 2018. He is now paralyzed and suing the department.

"Hopefully [it] can make them more mindful," said Dr. Marks.

Even Dr. Marks admits things will not change overnight. "In terms of changing actual behavior, that’s a longer-term proposition."

Marks is hopeful though, that it will help officers and the community. "Hopefully they will make a more fair decision, a more informed decision, and a more patient decision."

Dr. Marks said he will finish training all of the Phoenix police officers in April, then make recommendations to Chief Jeri Williams.

On Tuesday, he had a shorter, closed-door training session with invite-only members of the community. The media was not allowed to attend.

EDITOR'S NOTE: A prior version of this story misstated the Hispanic population in Phoenix as 20 percent, instead of 40 percent.