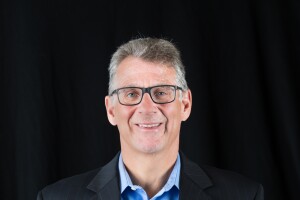 What is your job?
I lead the very talented team of journalists at ABC15 and am responsible for what we report in newscasts, on streams, on ABC15.com and on our digital channels.

Where else have you worked?
I've had the opportunity to work in many newsrooms all over the U.S. and to work for great companies including Cox, The Walt Disney Company, Gannett-Tegna, and now Scripps. My first job was in radio in Americus, GA, which is near Plains, GA, and included covering the Carter For President Campaign. From there the Big Adventure continued in Iowa, Minnesota, New York, Pennsylvania, Ohio, North Carolina, Alabama, and now Arizona.

Where did you go to college?
Undergraduate degree in Journalism from West Virginia University. Masters of Public Administration from the University of North Carolina, Charlotte.

Where did you grow up?
The Steel City. The City of Champions! Pittsburgh.

What are some of the biggest news stories you have covered or led coverage of?
Unfortunately, there've been quite a few natural disasters, including Atlantic hurricanes hitting North Carolina; major blizzards and floods in the Midwest and Northeast; and wildfires here in Arizona, most notably the Yarnell Hill Fire that took the lives of the Granite Mountain Hot Shots. I've covered two national political conventions, a couple of papal visits, the inauguration of George H.W. Bush, and a too many major recessions.

What is your philosophy on news?
News can and should be a force for good in our communities. We must seek and highlight diverse viewpoints. We should always treat with respect the communities we serve and those individuals we cover. We must hold the powerful accountable even when that is unpopular and difficult. Give our communities a voice. Help them find the facts and the truth. Cut through the noise. Make Arizona a better place.

What do you love about living here?
Arizona's landscapes and access to world class public spaces like Grand Canyon. Let's take a hike!