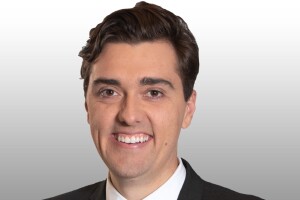 Adam was born and raised in Phoenix, AZ, and joins ABC 15 as a reporter. He attended Horizon High School and Arizona State.

After attending the Walter Cronkite School of Journalism at ASU, Adam packed up and moved to St. Joseph, Missouri, where he worked as a reporter, weekend anchor, and producer for the local Fox affiliate.

He covered a local school district scandal, local sports, and was the lead reporter at his station for Kansas City Chiefs Training Camp.

Adam moved back to the Valley in 2016 and began working for Your Phoenix CW as a reporter and host. He contributed to the weekly show Positively Arizona, co-hosted the 30 Second Download, and hosted and reported for Kickin It, a Phoenix Rising FC halftime show.

When he's not reporting the news, Adam is usually attending a swimming or library class with his daughter, Elle, and wife, Sierra. The trio loves to explore coffee shops and new restaurants around town.

You might catch Adam riding his bike up South Mountain, or even to the top of Mt. Lemmon. He's also an avid tennis player and fan.